It is only now that the Jat youth understands the significance of formal education and government occupations. 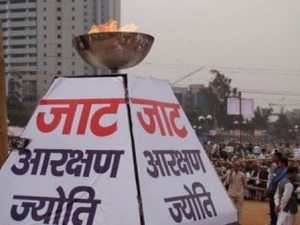 The Jats were recently out in the city of Haryana requesting reservations in government occupations and educational institutes under the Other Backward Class (OBC) category. They had been promised that the Economically Backward Category (EBC) quota will be increased from 10 per cent to 20 per cent by the state government.

Reservation for a specific area of society in India has been a noteworthy issue of debate. After India turned out to be free from the British rule, our Constitution makers made these reservations for those segments of society which were long neglected and disparaged. These reservations were intended to empower the downtrodden and enhance their status. This was done with the desire that at least one single generation in the next fifteen years would be at par with other people who are similarly privileged.

The present circumstance of this native optimism is before our eyes. Reservation framework has been mishandled by nearly everybody for their own advantages with absolute disregard for the national integrity and the principle of equality before law.

The Jats demanding reservation in government jobs and educational institutes is somewhat unwarranted for the Jats being landholders are prominently financially well off and are the prevalent caste.

“After the formation of the province of Haryana in 1966, the community turned out to be politically dominant also. So why has the community raised a commotion to be incorporated into the OBC list? All the more imperatively, why have they not asked for it in the earlier years?”

The explanation behind this demand is fundamentally because of the sentiment of indignation among the Jat youth because of the advancements made by communities lower in stature than them. It turned out to be too evident with the Kammas of Tamil Nadu and the Patidars of Gujarat. In addition, since the Jats were landholders in authoritatively vital zones, a significant number of them had turned out to be rich because of land acquisitions by the state government. The wealth they procured during the procedure is exhausting at an alarming rate owing to their costly indulgences because of which the future generations find themselves in a fix. It is only now that the Jat youth understands the significance of formal education and government occupations.

There is a sizeable population of the Jat youth who need government jobs in place of pursuing farming on grounds where it no longer worthwhile like it used to be. All the more imperatively, they need a sense of job security.

Due to the absence of incentives given by the state government, the youth find themselves either breaking their backs to find an unskilled job which is similarly underpaid or remain unemployed. Jats living in rural areas are very poor and are not able to give proper education to their children.

Is it possible that the inclusion in the OBC classification fulfills all of their objectives? This is improbable if we consider the speed of development of government occupations in the nation. An examination dependent on the National Sample Survey Organisation (NSSO) exhibits that the provisions of quota apply to negligible 18 per cent of the total occupations in the country.

This comes to simply 15.4 million jobs. It incorporates both in the Centre and state governments. While the number of permanent government jobs has remained steady over the past 10 years, the development has happened just in the private division and temporary occupations in government. This implies that all the discussions of quota by the legion of social gatherings to have a share is just 18 per cent of all the jobs. Therefore, community leaders should concentrate on equipping the individuals with abilities.

“While the Jats demand a caste-based reservation and are reluctant to impart their share to any other caste, the administration has offered reservation under the economically backward category and that too with four different castes. This has neglected to assuage the agitated mob that has taken to the streets and railroad tracks over the state.”

The Jats power quotient in Haryana can’t be overlooked by any political group. Jats make up at least 27 per cent of the state’s electorate and are viewed as the “kingmakers” in the state. About 33 per cent of the 90 assembly constituencies in the state are ruled by Jats. The two primary opposition political parties in Haryana are additionally headed by Jat leaders, the Congress by Bhupinder Singh Hooda and Indian National Lok Dal by Abhay Singh Chautala.

Though the Jat agitation took numerous lives and caused enormous harm to the government and private properties, large segments of the Haryana administration did not act against the rioters out of caste solidarity. Because of political aspirations of a few people, protests take terrible turns.

If government changes the criteria for giving reservations – for example rather than giving it based on castes, why not give it based on the financial status of a person? This will ensure that people who genuinely need it are given a chance.

Can reservation solve all the problems?

No, there are numerous loopholes in the framework but until the government thinks of something better, that’s all we have got.

The challenges and less than concerned government are the two sides of a similar coin. The Jats haven’t actually been quiet in their demonstrations. Neither has the Khattar government done anything considerable to take care of the interests of one of the most influential communities in Haryana. Despite the fact that the agitation has been called off for a time of fifteen days, the non-Jat Chief Minister should endeavor to achieve an agreeable settlement with the Jats.

This can be accomplished by drawing in new speculations and small/medium ventures to create occupations for the Haryana youth as a whole, and use other job-creating techniques. The reservation framework should be completely repaired and just the genuinely deserving should be given reservation. The Haryana Government should investigate all options prudently before allowing reservations to the Jats. Else it would just trigger reservation craze among different orders of society.

The writer is Director of modern education corporate Ivory Education.