Govt research has proved that both Covaxin and Covishield are operational against the current variants of SARS-COV-2. 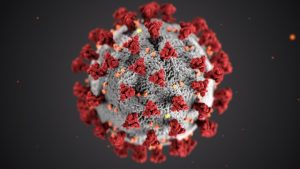 2021, science is abuzz with the news of newer variants, or coronavirus mutations, crawling up in some regions. These mutations of the original ‘Wuhan’ strain, or B 1.1.7. strain of the virus, have evolved as a result of rapid spread of disease, and as an endeavour for the virus to keep itself alive.

Officials at the Ministry of Health and Family Welfare, Department of Biotechnology, and the Indian Council of Medical Research, while briefing the nation about the alpha, beta, gama, and delta variants of the coronavirus on Friday, explained the causes and public health impact of the said mutations.

In India, the nomenclature of viruses is done according to the World Health Organisation Guidelines. Hence, the viruses here are classified into one of three categories. If a virus has a previous association with a similar strain and can impact public health, it is termed as a ‘variant under investigation’. Under this, the virus strain is thoroughly investigated for public health impact. When the genetic make of the virus is identified and scientists feel that it might have association with the receptor binding domain, or could affect the antibodies, they are called as ‘variants of interest’. Finally, if there is evidence of increased transmission of the virus and a clinical correlation is witnessed, it is termed as ‘variant of concern.’

The world currently has four variants of concern: Alpha variant, Beta variant, Gama variant, and Delta variant. The Delta variant was originally identified in India. “An Indian scientist put the virus mutation on global databse. We gradually realized its presence in other countries too,” Secretary, Department of Biotechnology, Dr Renu Swarup said. She futher added that another variation of the said mutation, Delta Plus, has been identified to be present in parts of India recently.

The Delta variant currently was first reported in October 2020. Sixty percent of the delta variant cases were registered in Maharashtra in February 2021. It has spread among 80 countries.

The officials further stated that the Delta variant of the virus may have been the cause behind the surge in Covid cases in Delhi, Maharashtra, and other states during the second wave. “Eight states have more than 50% cases born out of the variants of concern: Andhra Pradesh, Delhi, Haryana, Kerala, Maharashtra, Punjab, Telangana, West Bengal. Exponential surge during the second wave was driven by this virus,” Director, National Center for Disease Control, Dr Sujith Kumar, added. 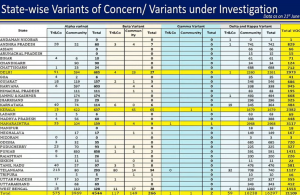 “The Delta variant is stronger than the alpha variant. Also, cases of Covid infected by variants of concern have increased since January. As for the Delta Plus variant, we have not been able to fnd any severe trends of the strain. It is rising, but mutations are similar. The transmission potential is also similar to the Delta strain,” he said.

“The public health impact of this additional mutation is currently being studied,” Dr Swarup added. Final results on the efficacy of vaccines will be released within 10 days by INSACOG, India’s Covid-19 consortium.

Why does SARS-COV-2 mutate?

As per ICMR chief Dr Balram Bhargava, the SARS-Cov-2 strain of the virus mutates due to random errors it may experience in duplication. It can also be affected by pressure of immunity acquired by vaccines, covalascent plasma, and monoclonals. “However, it is most highly affected by unterrupted transmission due to lack of Covid-appropriate behavior. The virus transmits more in this case, and acquires fitness,” Dr Bhargava added.

However, our research has proved that both Covaxin and Covishield are operational against the variants of SARS-COV-2. While there is a slight drop in efficacy, both vaccines continue to work better agains the above mentioned stains of the virus when compared to international vaccines, as per government data. 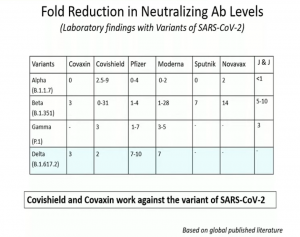 On Friday, India reported 51,662 cases of Covid-19, following the pattern of decline. The nation has now witnessed an 88% decline in fresh infections since the peak in May. The tally of active cases stands at 6.13 lakh, and the recovery rate stands at 96.7%. Over 31 crore vaccine doses have been administered in the country, while 5.42 crore citizens have been fully vaccinated.