Here’s Why a Third Covid Wave in India is Inevitable

SARS-COV2 variants all across are getting stronger, and a collapse in Covid appropriate behavior will only strengthen their ‘hit and run’ capacity.

India’s Chief Scientific Advisor on Wednesday, May 5th, told the country that while we are witnessing a gut- 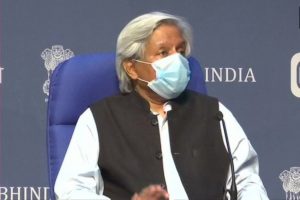 wrenching second wave, a third Covid wave is inevitable. “A phase 3 is inevitable, given the high levels of circulating virus. But it is not clear on what time scale this phase 3 will occur. Hopefully, incrementally, we should prepare for new waves,” Dr. K Vijay Raghavan said.

A major reason behind this repeated surge can be the occurrence of new variants of the SARS-COV2, the virus behind the pandemic, which can become immune-evasive and vaccine-evasive after a few rounds of mutation. “New variants will arise across the world and in India too. Variants which increase transmission will likely plateau, but immune-evasive variants and those which lower or increase disease severity will arise going ahead,” he said. However, scientists have reported that while the possibility of a vaccine-evasive mutant exists, it has not developed until now. Researchers all across are working to fight these variants, and modified tools are being developed.

What Caused the Upsurge in the Second Wave?

While the second wave was expected to be less harmful than the first, multiple parameters caused surge in small amounts individually, but in the end resulted in an exponential increase. After the first wave, immunity can keep new infections low. However, it is possible for the immunity to not be widespread as the fraction uninfected (due to cautionary steps they may have taken in the first wave) may have been large.

While we know that immunity can also fade, research shows that even 8 months after being infected by Covid 19, people can have high immunity. However, the combination of less caution and less immunity from the first wave and the consequent opening up of the virus drives a large second wave.

“In other words, if as long as variants are not immune-evasive substantially, they can be more transmissible. But that alone will not cause a surge, unless cautionary steps decline and a large population is available for infection,” Dr Raghavan added.

How Did the First Wave Subside?

Dr. Rahavan attributed two factors to the decline of the first wave- rise of immunity, and increased cautionary steps. As infections rose, so did immunity among those affected. As cautionary steps were taken increasingly, there was less opportunity for the virus to spread.

A combination of standing level of immunity and cautionary steps halted the rise of the first wave and caused a decline.

He added, “But if we drop our guards, it drops the standing level of immunity, which anyway is not enough to stop infections. Many people get infected until we reach a new immunity threshold.”

What Can Lead to a Third Wave?

When SARS-COV2 emerged in Wuhan, it was a ‘generalist’ virus, meaning that it could affect a number of mammals. It was not a strictly human-adapted virus. Even in the first 11 months, no major variant was witnessed. In October 2020, however, the B117 and 116 variant developed dramatic changes. “While people have already studied how changes in spiked protein, which is a key aspect of the virus to infect humans, could change the antibodies’ insensitivity, people could not predict this kind of accumulation of mutations to come and give rise to a lineage like B117. This was indeed somewhat of a surprise. This set of mutations could have risen in an immune compromised individual were lots of opportunities for change can take place,” Dr. Ragahavan added.

Virus become more refined as transmission and mutations increase, till they eventually reach a peak. A virus which is better at transmission can eventually lead to them being able to avoid vaccines. While that has not happened substantially yet in the existing variants, but its occurrence cannot be denied.

“Early 2021 something changed importantly, since a large number of people across the world had been affected. As immunity increases, the virus does not have the opportunity to grow, but it searches for pockets to go through and hence evolves to be more efficient in transmission. In this wave, the virus efficiency has evolved based on an already present immunity in the population,” he said.

He further added that to avoid a third wave that is critical to a large population’s health, it is important to develop a lifestyle that has masks and social distancing. He insisted that while research goes on, and attempts are made to fully vaccinate the country’s population, everyone should strictly work together and follow Covid appropriate behavior.