Parliamentary Committee Had Warned of a Second COVID Wave in November

The committee had expressed concerns over lack of oxygen, beds, COVID-19 related medicines, and said that the threat of COVID-19 still looms large.

The Department-related Parliamentary Standing Committee on Health and Family Welfare had warned the central government of a second COVID-19 wave in a report (Report No.123) submitted in November 2020. 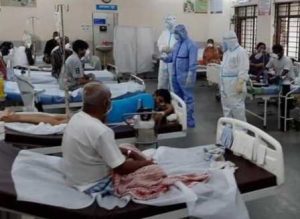 Chaired by Rajya Sabha MP Ram Gopal Yadav, the report titled ‘The outbreak of pandemic COVID-19 and its management’ had suggested the government to be prepared for another wave of the virus, by citing examples from European countries where the virus had resurfaced after a short dip. The committee had expressed concerns over lack of oxygen, beds, COVID-19 related medicines, and other essential items during the first wave of the pandemic and suggested that the government boost the medical infrastructure to avoid catastrophic instances in case of another wave. However, even with the suggestions, India continues to suffer due to an onset of COVID ‘tsunami’, with over 3.5 lakh cases being reported daily.

The second wave of the virus, which began towards the end of March, has now resulted in over 2 lakh deaths across the country. This has also resulted in a breakdown of the country’s healthcare system, with reports of diminishing oxygen and low availability of hospital beds being an everyday ordeal.

The report was presented to the Rajya Sabha Chairperson on November 21st, 2020, and was laid on the table of the house on February 2nd, 2021. It read, ‘The Committee observes that after a steady increase in the number of Covid Cases across the country, there has been a downtrend. However, the Committee strongly feels that the threat of Covid-19 is still looming large on the country keeping in view the second and third wave in European countries and spike in Delhi.’

It further said that India must also be prepared to combat a possible second wave of Corona especially in the ensuing winter season and superspreading series of festive-events.

In the 190-page report, the Committee analysed all the disease containment measures taken up by the central government, including the national lockdown, and did a SWOT (Strengths, Weaknesses, Opportunities, and Threats) analysis of GOI’s contingent and mitigation plans. It suggested that adequate primary and secondary healthcare infrastructure needs to be put in place especially in the rural areas by increasing requisite investment on physical infrastructure.

It further recommended to boost the healthcare system in districts and states that have poor medical infrastructure (where a large majority of the cases are being reported now). It read, “Such areas need to be identified on priority and provided the required infrastructure for tracing, testing and treatment by providing the required financial aid. The Committee calls upon the Ministry to make best use of the extra-ordinary situation arising out of the outbreak of pandemic COVID-19 for strengthening the primary and secondary healthcare services.”

The Committee also suggested to increase budgetary allocation towards the healthcare sector to 2.5% of the GDP. Increasing the availability of beds and medical oxygen were specially stressed in the report. “The Committee observes that the total number of Government hospital beds in the country was grossly inadequate keeping in view the rising incidence of Covid-19 cases. Lack of hospital beds and the inadequate ventilators further complicated the efficacy of the containment plan against the pandemic. As the numbers of cases were on the rise, a frantic search for vacant hospital beds became quite harrowing. Instances of patients being turned away from overburdened hospitals due to lack of vacant beds became the new normal,” it read.

The Committee had also suggested the government to put a cap on oxygen cylinder prices, and boost its production. It said, “The Committee strongly advocates National Pharmaceutical Pricing Authority to take appropriate measures for capping the price of the Oxygen Cylinders so that the availability as well as affordability of the Oxygen Cylinders is ensured in all hospitals for medical consumption. The Committee also recommends the Government for encouraging adequate production of Oxygen for ensuring its supply as per demand in the hospitals.”

Adequate vaccine production was also stressed upon with suggestions from the Committee that the jab should be subsidised for weaker sections and should be produced in bulk.