Historic Wins for TMC in Bengal and LDF in Kerala; BJP Retains Assam

Results for a high-stakes electoral battle in West Bengal, Kerala, Tamil Nadu, Assam, and Puducherry were 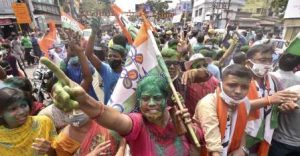 announced by the Election Commission of India on Sunday, May 2nd. In a truly historic electoral battle, three incumbent governments won the mandate in WB, Kerala, and Assam. The state of Tamil Nadu saw the return of a party that had been in opposition for the last 10 years, while one of the last remaining bastions of the Congress, Puducherry, was lost to the AINRC-BJP alliance.

The Trinamool Congress alliance swept the West Bengal polls with a historic mandate. As of late evening, TMC+ has won 208 seats and is projected to win another 5, according to official ECI data. The 213-seat victory will assure a third term for the TMC government. The Bharatiya Janata Party-led National Democratic Alliance has won 78 seats.

However, Suvendhu Adhikari’s victory over the incumbent Chief Minister and TMC leader Mamata Banerjee is being hailed as a victory for the BJP, who has been able to defeat the latter by over 1700 votes in Nandigram. Adhikari was a former TMC member and had joined to the BJP close to the elections. Addressing the media in the evening, Mrs. Banerjee said, “I accept whatever verdict Nandigram will offer. I am grateful for the landslide victory in the state. Sometimes, sacrifices have to be made.”

Polls in West Bengal were held in seven phases between March 26th and April 29th. It saw an electoral battle between three fronts: TMC+, BJP+, and the Congress-Left Front alliance. However, the Congress and CPI(M) failed to win any seats. TMC members, including Rajya Sabha MP Derek O’Brian have contested the ECI decision in Nandigram. The members have submitted a letter to the ECI alleging EVM tampering and election fraud in the constituency. 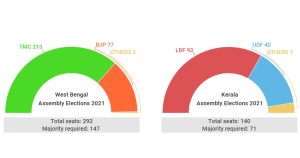 Kerala also witnessed a historic win for the Left Democratic Front. The last remaining ‘red’ bastion will be witnessing a government’s second term for the first time in four decades. The Communist Party of India (Marxist) led alliance has won 93 seats, much beyond the required majority of 71. The total number of seats in the Kerala assembly is 140.

Current Chief Minister Pinarayi Vijayan swept the Dharmadam constituency by a margin of 50,000 votes, while Health Minister K.K. Shailja won Mattanur by 60,000 votes. “It is the people’s victory. They trusted us and we trusted them. The election was a big political fight for us,” Mr. Vijayan said.

Part of the Union Democratic Front, the Indian Union Muslim League won 15 seats. The leading party in UDF, Congress, however, won 21 seats. Altogether, UDF hailed victorious in 40 seats. The BJP failed to garner any seats this year. BJP-led NDA’s Chief Minister candidate, ‘Metroman’ E Sreedharan, also lost his seat in Palakkad to Congress’ Shafi Parambil. Polls in Kerala were conducted in a single phase on April 6th, along with Tamil Nadu and Puducherry.

The BJP, however, witnessed a massive victory in Assam, where it alone won 60 of the 126 assembly seats. The BJP-led NDA won 60 seats and is currently leading in 8. As per ECI data, the alliance may prove victorious in 69 seats. The Assam state assembly has 126 seats, of which 64 are required to form a majority. Following the poll debacle, Congress’s Assam president Ripun Bora resigns, sends letter to Congress President Sonia Gandhi.

Post the announcement, Prime Minister Narendra Modi, who was actively involved in campaigning in the state said, “The people of Assam have again blessed the NDA’s development agenda and the pro-people track record of our Government in the state. I thank them for the blessings.” He also wrote a note of thanks for his party workers, “I appreciate the hard work of NDA Karyakartas and their untiring efforts in serving the people.”

Anti-incumbent trends were witnessed in Tamil Nadu and Puducherry. The 234 member constituent assembly in TN was won by the M.K. Stalin-led Dravida Munnetra Kazhagham+ alliance. While the final results in a number of seats are yet to be announced, the DMK-Congress alliance swept the polls. As of late Sunday evening, it has won 85 seats and is in the lead in 71. ECI data projects the alliance to win 158 seats altogether, crossing the majority mark of 118. 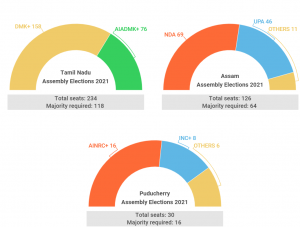 This win is also being marked historic due to a return of the DMK in TN, which had been in the opposition for 10 years. The incumbent government of the All India Anna Dravida Munnetra Kazhagam-BJP alliance has won 35 seats. It is leading in 43 seats, but will only be able to achieve victory in 78 seats. A much-anticipated candidate, actor Kamal Hasan, also lost the electoral battle after his party, the Makkal Needhi Maiam, failed to win any seats.

In Puducherry, however, BJP’s alliance with All India NR Congress proved successful. The alliance won 16 of the 30 constituency seats, barely crossing the required majority mark. The DMK-Congress alliance lost the electoral battle and won 8 seats.

The results proved much different than various exit poll predictions released on April 29th. While various exit and opinion polls had predicted a tough contest between BJP and TMC in West Bengal, the battle did not come close. However, BJP has established its footprint on West Bengal soil by winning 78 seats. It had only 3 seats in the 2016 election. DMK was also projected to sweep the assembly but stopped at 156 votes. A pro-incumbency wave was witnessed in the states of West Bengal, Kerala, and Assam and brought in historic victories for TMC and CPIM. Assam emerged as a golden spot for the BJP.

Elections in the five states were held during an ongoing peak of the Covid-19 virus, and campaigning was suspended in West Bengal towards the last phase. However, a plethora of fresh infections was witnessed in all the election states. Since the second wave is still going on, the ECI banned all victory celebrations on Sunday. Party leaders such as Mamata Banerjee, Narendra Modi, Pinarayi Vijayan also requested their supporters to not gather for celebrations.