How Indian Islands Are Crumbling Under Climate Change

An estimate claims that within the next 2-3 generations, Lakshadweep would be inhabitable and that Andaman & Nicobar will have to be vacated.

In 2018, the Prime Minister of Fiji, Frank Bainimaramam, presided over a meeting as part of the Conference of Parties 23, or COP23, to help slash the grim situation islands faced due to climate change. Fiji, a country made 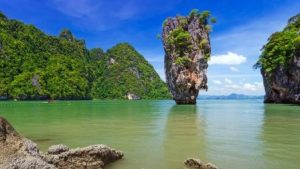 up of 300 islands, attracted global attention to the rising threat of climate change on islands and coastal lands. The risk that endows 4.5 million people settled on the islands also raises questions on India’s vulnerability to climate change.

Indian mainland consists of 6100 km of coastline and combined with the islands, the number increases to 7517 km. The Indian islands consist of 2prime groups—Andaman & Nicobar and Lakshadweep islands, together consisting of 611 islands; of which, 46 islands are habitable. Along with them, 13 coastal states and union territories are susceptible to losing land due to the rising sea level. In addition, 84 coastal cities in the country are under threat from cyclones.

Climate change is already a reality. Its adverse effect will be experienced firsthand by India’s islands in the form of loss of land due to rising sea levels and disastrous events like cyclones and sea storms. These conditions will render India’s islands uninhabitable. Intergovernmental Panel on Climate Change (IPCC) report claims, “Islands like Andaman and Nicobar, Maldives, etc. will have to be vacated.”

The study titled Climate change and its Economic Impact on Mumbai explains that from the period of 1901–2007, there has been a rise of 1.62°C, which causes a 2.4mm rise in sea level every year. Conducted by the National Environmental Engineering Research Institute, it further adds that by 2050, the financial hub of India, Mumbai, could face damages worth INR 35,00,000 crores due to climate change. Climate change is particularly damaging to India, as the majority of the population are directly involved in climate-sensitive sectors like agriculture, fisheries, and animal husbandry.

Effects of Climate Change on Islands

Every island ecosystem is unique because of the geographic isolation it gets to cultivate its own set of vegetation and vulnerabilities. Out of the 2,200 species of plants found on Indian islands, 200 are found nowhere in the world and 1300 species are not found in mainland India. Any island is made up of small ecosystems which, though fragile, are linked to one another in a way that one disturbance can easily cause dissonance to the entire system.

The islands will face severe land loss as the sea would reclaim the coastline and low-lying lands by rising water levels at a pace 2.5 times of what was found in the last century. The coastal development, excessive fishing, human migration, sand mining, and tourism activities found on the islands also add stress to the region.

The conditions in A&I are geographically and ecologically unique and place them under a “thick disaster probability envelope.” This manifests itself into different difficulties ranging from the loss of land to the loss of primary occupation due to coral bleaching. As high temperature activates thermal stress, a process where photosynthesis and calcification affect coral reef systems.

Andaman and Nicobar Islands (ANI) have been the prime focus of various developmental activities. As they stand at the entrance of Malacca Strait in the Bay of Bengal, which is the world’s busiest shipping route, it has witnessed a huge surge in naval movements. It is a group of 572 islands and has 0.25 per cent of India’s landmass, but houses 1 biosphere, 9 national parks, and 96 wildlife sanctuaries. As a result, 80 per cent of ANI is filled with a rich and luxuriant growth of vegetation including 38 species of mangroves; out of which, 5 species are globally conserved (IUCN 2011).

The Forest Survey of India in 2019 reported a 0.78 sq. km increase in the forest cover in ANIbut said that the cover of mangroves in the same period decreased. In this group of islands, mangroves can be seen increasing in one part and decreasing in another, which challenges scientists and conservation experts to assess the situation perfectly. A study conducted in 2020 using satellite data analysis reported a loss of 6500 h of mangrove growth in northern Andaman alone.

Being a seismic zone, it impacts the islands every 72 to 96 hours. The USGS data claims that 138 tremors hit this group of islands in 2019. The most severe of all was the 2004 earthquake that subsequently triggered a tsunami. Two degradation hotspots are identified for the years 2030 and2050: the Mayabunder and Diglipur region. They will face the most severe consequences of climate change and high migration.

Lakshadweep is a group of 36 islands located off the west coast of India in the Arabian Sea, and it is India’s smallest 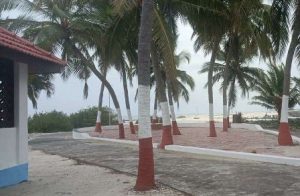 Union Territory. In its 30 sq. km, only 0.064 million people reside. This group of islands is facing severe side effects of climate change. It is estimated that within the next 2-3 generations, Lakshadweep would be inhabitable.

In 2019, Lakshadweep lost one of its islands. Parali I was a small island in the Bangaram atoll of the archipelago that sank, yet even today maps and surveys of India do not count this reality. There are many reasons for the sinking of this island. Some factors could be the rise in sea-level, violent and unpredictable seas, decaying corals, and turbulent and changing ocean currents.

By being mainly a coral island chain, it has been witnessing severe damage to its corals. A study conducted by the Oceans and Coasts Program of the Nature Conservation Foundation records a 40 per cent drop in coral cover, from 51percent in 1998 to 11percent in 2017. Corals in this region suffered badly in 2010 and 2016 by El Niño, as the water temperatures kept rising in the Arabian Sea. Deteriorating conditions of the corals will result in the decline of available fish stock, which will affect the prime livelihood of inhabitants.

The Prime Minister along with the central government is aiming to develop and build India’s islands for world-class tourism destinations. The government along with its think-tank, NITI Aayog, has put considerable effort in gathering the different stakeholders to agree with the plan. In 2020, the Home Minister chaired an Island Development Agency (IDA) meeting, where the plan was put into progress. Environmental and Coastal Regulation Zone clearances were received for the 4 projects in ANI. At the same time, airports were proposed to develop in both ANI and Lakshadweep.

Andaman and the Nicobar Islands on the east and the Lakshadweep islands on the west would have to face severe stress not only from climate change but also from tourism and development projects. Being the first to face the worst conditions of climate change, there is a high probability of facing continental waves, change in ocean current, earth’s tilt, coastal erosion, diminishing freshwater supply, declining fish reserves, and loss of coral reefs.

The Climate Vulnerable Forum Summit 2018 states that many islands would disappear by 2100. This leaves us no choice but to propel action. A pragmatic strategy needs to be implemented, which will balance the various variables of environment and geophysical uniqueness along with the need and scope of development. The Climate Change Action for our island territories needs to be implemented by understanding the scope of its adverse effects and by building preventive measures against it.