Impact of COVID-19, Reforms and Poor Governance on Labour Rights

The lessons of the COVID-19 strongly call for the abdication of fiscal conservatism and frame a comprehensive and durable social assistance comprising direct benefit transfer, urban employment guarantee scheme and strengthening of MGNREGS.

The Book, “Essays on COVID-19, Labour Market Reforms and the World of Work in India” provides a critical analysis of the impact of the policies, laws, government regulations, issues concerning workers, especially the 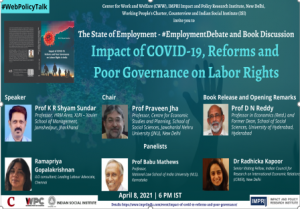 Talking about the book, Prof Sundar said, “Ever since the introduction of economic reforms in 1991 in India, employers and critics of labour regulation have argued for the introduction of reforms of the labour laws and the inspection system”. He said, “They demanded codification of labour laws and the introduction of employer-friendly reforms in the process. The central government, irrespective of the parties in power, is committed to labour laws reforms, more so the NDA government. On the other hand, the trade unions have stridently argued that in the era of globalisation, job losses have become rampant, the quality of jobs has deteriorated considerably, and hence they demand that labour laws need to be universalised and be effectively implemented.”

The COVID-19 pandemic has wreaked havoc on the lives and livelihoods of people in all the countries. It has severely impacted informal and unorganised workers, people below the poverty line, and thereby exacerbating existing inequalities in the economic system. ILO strongly recommended a four-pillar comprehensive and balanced approach arguing for designing policies and measures based on social dialogue to ensure employment generation, income, social protection, workers’ rights, and support to the firm. However, the tale of policymaking in India during the pandemic does not conform much to the healthy perspective of ILO.

“My book is based on the fundamental premise that labour institutions and social dialogue are indispensable for promoting sound labour market and industrial relations policies that would at once protect both employers’ and workers’ rights and concerns, especially during the crisis-ridden crucial time such as the one we are facing now,” said Prof Sundar. He further added that “had the government consulted the social partners in designing a comprehensive policy architecture to provide relief and in life-saving measures especially to the small enterprises and informal workers and also in their delivery, had the government and other agencies implemented even a fraction of the even conceptually defective labour laws concerning the unorganised and the migrant workers, had the government consulted global organisations like the ILO, UN and academics in tackling the workers’ woes, the play of pandemic in the lives of these millions of distraught workers would have been better”.

During 2007-2017 a total of 10,728 workers availed unemployment benefits under the stringent ESI-covered unemployment scheme which means an average claim of 978 workers per year! Will we see a repeat of poor labour market governance witnessed during COVID-1? Such a question arises because we are witnessing inordinate delay in taking corrective measures such as creating a comprehensive database concerning migrant and unorganised workers and framing policies and creating governance mechanisms.  The Draft Migration Policy was released just recently and the Labour Bureau is set to launch five employment surveys which though covers migrant and domestic workers strangely leave out workers in the emerging sectors like the gig and the platform economy, and informal professional service providers.

There are welcome measures, but there is no credible gestation plan for implementation of them.  The whole tragic story of workers’ rights is the shoddy or non-implementation of even the meagerly legislated rights.

A comprehensive database of workers and employment are essential for devising universal social protection, which would help better implementation of the four Labour Codes.

More worryingly, the pandemic period witnessed undue haste in the enactment of the three Labour Codes and the passage of several unilateral and highly questionable legal measures and the unveiling of structural reforms like privatisation and FDI-easing measures.  Worse still, the lessons of the pandemic have not led to the formation and implementation of governance reforms concerning the delivery of legally mandated reliefs to the migrant and the unorganized workers.  We are witnessing COVID-resurgence and the hurt-shy migrant workers have begun their second wave of reverse migration.

Firms and workers alike are apprehensive of a potentially more severe if not a macro lockdown. In the absence of a macro unemployment benefit or insurance scheme and social security, at least Then, what is the meaning of the passage of the four Labour Codes when the historic governance deficits are still prevalent? Eventually, the passage of the Labour Codes remains more symbolic given that implementation goalposts are being delayed.

The lessons of the COVID-19 strongly call for the abdication of fiscal conservatism and frame a comprehensive and durable social assistance comprising direct benefit transfer as economists across spectrum and trade unions have been urging the government to extend, urban employment guarantee scheme (at least during the COVID-19 period) and strengthening of MGNREGS.

Employment and work are the surest cures to both unemployment and poverty which are sure to haunt the people during COVID-2. However, Indian democracy is sturdier and its pluralistic approach is still dynamic and it is with hope I see distinct possibilities of “corrective actions” both inside the Parliament and Assemblies and outside. It is important that workers feel safe and that involves more than gestures and indirect actions like infusing liquidity in and providing no-collateral soft loans to firms, people and street vendors in the economy”

While releasing the book, Prof D Narasimha Reddy commented, “Here is a book that tells you the precariousness of the migrant and informal workers during the pandemic COVID-19 due to the conscious failure of the state and the apathy of the judiciary. In much more detail it exposes the deficits of the reforms emerging in the shape of the Four Labour Codes”.

Dr Radhicka Kapoor observed “India’s labour regulatory framework has witnessed substantial changes over the last year from the introduction of the four Labour Codes by the Central Government to the relaxations and amendments made by several state governments to key labour laws.

Prof Shyam Sunder’s compilation of essays not only provides a systematic exposition of these changes, but also critically analyses each of them, the various shortcomings, and how these can be addressed.

Prof Shyam Sunder’s lucid writings help us navigate the labyrinth of India’s labour regulations and understand how we can move closer to this goal. Importantly, he urges us to expand the horizons of the debate on the subject beyond the narrow agenda of “flexibility” to issues like a minimum set of decent conditions of work and wages to all workers and a minimum basic level of social security.”

Speaking on the occasion, Prof Babu Mathew said, “I commend this book of Prof Shyam Sundar to serious students of labour studies: One must carefully read both the explicit message and the one between the lines to decipher the glaring and I’ll inform swing of the Indian State towards “Ease of doing business” while grossly neglecting “Core labour standards” and “decent conditions at work” for the impoverished millions.”

Prof Praveen Jha said “Professor K.R. Shyam Sundar has been a major scholar of Industrial Relations in India and has a substantive body of work to his credit. The current book focuses on the context of the COVID-19 pandemic and its implications for the world of work. It consists of his short and incisive pieces on the devastating impacts of governance and policy failures during the pandemic on livelihoods of the working people in general and multiple deprivations they have been subjected to. Prof Sundar has chronicled these with care, empathy, and an eye for detail while providing a persuasive analysis.”

Ms Ramapriya Gopalakrishnan observed, “The book is a must-read for anyone interested in understanding: the impact of COVID-19 on the lives of workers in the country and the changes in the labour law landscape in the new normal world. I commend Synergy Books for bringing out such a book and also the author for his excellent writings.”