India Fails to Live up to Its Cyber Power Potential

While the country has evolved significantly in cybersecurity, it fails to match the potential of scientific and technological prowess, a study reveals. 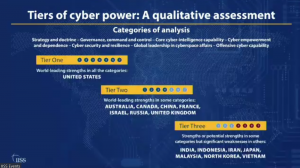 the visible potential of India as a scientific and technological power, member of a policy think tank, International Institute of Strategic Studies, Dr Greg Austin, said on Monday.

“The government in India has performed slower in comparison to most countries in terms of building on early promise. While it continues to harbour great developments in the realm of cyberspace, including cybersecurity organisations and cyber courts, it has not been able to match the potential it has as a scientific and technological power,” Dr Austin, who heads the Cyber, Space, and Future Conflict research program at IISS, added.

Dr Austin was speaking at the launch of the think tank’s recent report that analyses the cyber power of 15 nations, to gauge the cyber ecosystems’ intersection with international security, economic competition, and military affairs.

Titled ‘Cyber Capabilities and National Power: A Net Assessment’, the report reveals that despite the geostrategic instability of its region and a keen awareness of the cyber threat it faces, India has made only modest progress in developing its policy and doctrine for cyberspace security.

The categories that the report classifies countries on are as follows: Strategy and doctrine; Governance, command and control; Core cyber-intelligence capability; Cyber empowerment and dependence; Cybersecurity and resilience; Global leadership in cyberspace affairs; Offensive cyber capability.

After studying the cyber power potential of India for two years, the researchers at IISS have concluded that the nation’s approach towards institutional reform of cyber governance has been slow and incremental. The key coordinating authorities for cybersecurity in the civil and military domains were only established in 2018 and 2019 respectively. While praising the start-up culture in India and the strength of its digital economy, the report stated that the development of the private sector happened at a pace faster than the government’s pace to promote cybersecurity.

“The country is active and visible in cyber diplomacy but has not been among the leaders on global norms, preferring instead to make productive practical arrangements with key states. From the little evidence available on India’s offensive cyber capability, it is safe to assume it is Pakistan-focused and regionally effective. Overall, India is a third-tier cyber power whose best chance of progressing to the second tier is by harnessing its great digital industrial potential and adopting a whole-of-society approach to improving its cybersecurity,” the report reads.

The report states that cyber capabilities also featured prominently in the new Land Warfare Doctrine released by the Indian Army in late 2018, through which cyberspace was designated as a new dimension of warfare and an important factor in winning future battles. This document also foreshadowed the increasing integration of cyber capabilities into covert operations. The armed forces, then, developed and upgraded cyber defence capabilities and attempted to fight prolonged battles in cyber disruption.

India also saw a wave of cyberattacks after its 2020 border confrontation with China in the Galwan valley. This has increased Indian concerns towards cybersecurity, even among systems supplied by China.

The report further highlighted that India’s cyber-intelligence capabilities have been focused on Pakistan. “There are indications that, since about 2010, Indian cyber teams have been targeting IP addresses in Pakistan (and to a lesser extent in China), as well as secessionist movements within India itself, in a significant cyber-surveillance and cyber-espionage operation,” it reads.

Further afield, however, India’s cyber-intelligence reach appears weak and relies on global partnerships with the US, UK, and France, for a higher level of cyber situational awareness and to help it develop a greater reach of its own in future. India’s increasing geopolitical influence and burgeoning digital economy may be the reasons behind it being a target of cyberattacks, and thus seeking help from diplomatic efforts. “India knows that its defensive capabilities are weak,” the study points.

It further presents India and the US as a close ally in cyber partnerships, since both have held regular dialogues on the issue since the early 2000s. Cyber is also envisioned as a component of several other US–India agreements, including on intelligence sharing and mutual legal assistance.

“Public statements by Indian officials and other open-source material indicate that India has developed relatively advanced offensive cyber capabilities focused on Pakistan. It is now in the process of expanding these capabilities for wider effect. Overall, India’s focus on Pakistan will have given it useful operational experience and some viable regional offensive cyber capabilities. It will need to expand its cyber-intelligence reach to be able to deliver sophisticated offensive effect further afield, but its close collaboration with international partners, especially the US, will help it in that regard,” the report reads.

To help it jump ship and evolve into a ‘Tier 2’ country, Dr Austin suggested that India must focus on its university system and develop capabilities that birth an innovator class. “Tier 3 countries must invest in education and training in the cyberspace realm,” he added.