India Moving: A History of Migration

Overall, one can say that this thickly footnoted book can be an absolutely wonderful and a much-needed read for scholars and students, who wish to investigate into or rather start out in the vast sea, that is migration.

Migration has always been a heated topic and more so in current times when numerous political parties in the country depends upon this. Hence, many political battles are being 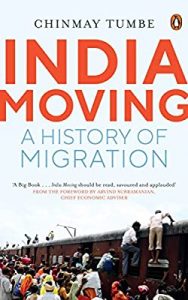 fought over migration and allied issues. Politics and emotions are both relying on nativism currently. If one has not had much exposure to the topic of migration, “India Moving: A History of Migration” by Chinmay Tumbe, Faculty at the Indian Institute of Management, Ahmedabad, could very well be the book for them. The first time I heard about ‘the book, I was psyched! How often is it that one gets to read about migration starting from the ancient times moving up to the contemporary society – all in one book. This work came out of the author’s PhD thesis while at IIM Bengaluru and the research that he did post PhD.

Arvind Subramanian, the former Economic Adviser to the Prime Minister of India, adorned the book by writing a foreword wherein he remarks that the book should be read, savoured and applauded. The book is divided into six chapters which discuss everything from Indian Diversity to the Great Indian Migration Wave, from Diasporas to Partitions and from Displacement to Development. The first chapter itself begins with a quotation by the former Prime Minister Jawaharlal Nehru, “India is a geographical and economic entity, a cultural unity amidst diversity, a bundle of contradictions held together by strong but invisible threads.”

Tumbe then goes on to talk about the diversity of the country. He then moves onto discuss migrations from ancient to modern times. The next chapter is all about what the author calls the ‘Great Indian Migration Wave’ which he classifies as the world’s largest and longest voluntary migration in history. Tumbe talks about both internal and international migrations as well as voluntary and involuntary migration. Migration can be used as a tool to come out of despotic rules, and in many other cases to further improve one’s living condition and quality of life on the basis of markers like religion, gender and obviously, caste!

In his own words, “it ranks among the largest and longest migration streams for work in documented history. He argues that this phenomenon led to the rise of cities like Kolkata and Mumbai in India and Yangon and Dubai, outside of the country. This ultimately played a very important role in shaping the history of modern and contemporary India. Tumbe defines the features of the Great Indian Migration Wave and says that it is “male-dominated, semi- permanent and remittance-yielding”.

There’s an interesting study that Tumbe did in Ratnagiri which is not just famous for its mangoes but also for man—goes (exporting man power) too. Migration, according to Tumbe was a ‘well established tradition’ in mid-19th century Ratnagiri and it affected three principal castes.

There are more case studies about Udupi in Karnataka, Density and Destiny (Saran in Bihar), Ganjam in Odisha among others, in this chapter.

Further, Tumbe talks about displacement arising out of dams and partition of India, about migrations from certain States (like Uttar Pradesh, Kerala, Bengal and Bihar) which he classifies as ‘clusters’ (coastal clusters and Gangetic clusters), slavery, etc., just to name a few. He goes on to talk about the factors on which he has classified these clusters and their history which again has a lot to do with migration. Tumbe argues that more and more migration is a good thing because it enables people to benefit tremendously, which is not possible if one is stuck at one place. This benefit is in terms of money, facilities, exposure, etc. A migrant network helps a lot if one belongs to that network in terms of jobs and information, which is why it’s essential to get more and more people out there with the help of migration. In his study in the Konkan region, he found out that the upper castes have a much wider network as compared to other castes.

One outstanding thing about the book and more about Chinmay Tumbe’s writing style is that it is very lucid and readable, which means that the book has been written in a non-academic style so that it can penetrate through the masses and reach readers outside of academia too. He has dexterously combined the disciplines of economics, history and mixed it up with sketches and literary references to paint a picture of why and how the people of India moved over the years. Looking at the endnotes and references of Tumbe’s book, it can be firmly stated that he stands on the shoulders of giants in the field of ancient, medieval as well as modern and contemporary history. Instead of looking at smaller, more pressing issue-based researches, Tumbe chose to look at migration that stretches from the pre-historic times to the present times, also including the Rohingya migrations. However, he focuses more on migrations from the north and north-western states and doesn’t really probe deep into the migrations from the states of down south. 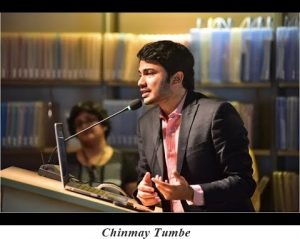 Further into the book, the author talks about merchants and discusses various merchant communities in India starting from the Sindhis, Punjabis, Gujaratis to Marwaris, and the reasons behind their migration. The author deliberates on migrations of Muslim, Jew and Parsees too. Further ahead in the book, we find Tumbe discussing diasporas where he talks about how the Gujaratis, Malayalis and Tamilians were key to the extension of their internal and international diasporas during the colonial period. Partitions and displacement are discussed in another chapter written rather interestingly. He starts with the Partition of Burma in 1937 and moves on to the Partition of India in 1947 and the birth of Pakistan, which has been discussed from both western and eastern fronts in the book. The birth of Bangladesh, which resulted from the separation of East Pakistan from West Pakistan in 1971, is also probed in. One will get a bird’s eye view of migrations happening from Tibet, Sri Lanka and Kashmir regions. The author could have given more emphasis on ‘twice migrations’ prevalent among the Sindhi and Punjabi communities that migrated to the Indian side of the border during the Partition of India in 1947, and then migrated to other parts of the world due to economic reasons mostly.The last chapter in the book discusses migration and development. Tumbe argues in the book that how migration is a wonderful thing and one shouldn’t shy away from it, as many a times, it opens better avenues for people than were available at their native place.

Another interesting thing that he talks about is of Ambedkar and Thackrey and their different views on migration. Ambedkar on one hand, looked at migration as a very positive thing that uplifted his status and gave him a sense of dignity, whereas Thackrey on the other hand, looked at migration from the point of view of a native. He also adds a third dimension of Gandhi (‘cosmopolitan recommending fixity’).

Overall, one can say that this thickly footnoted book can be an absolutely wonderful and a much-needed read for scholars and students, who wish to investigate into or rather start out in the vast sea that is migration.

It will help give an overview to the reader thereby making them understand the various nuances and types of migrations, and they may ultimately be successful in selecting a topic from this reader and probe into it a little more.

The author takes into consideration and attempts to answer many questions as part of research for this book. He details the readers about the hotspots of emigration in India and talks about the size of the Indian diaspora. Tumbe’s book looks at how India has built by taking into account migration patterns and interestingly everything from literature, cuisine, music to folklore is all somewhere related to the history of migration. As is presently evident, foreign politics, trade, economy are also influenced by migration.

Tumbe also tries to point out the “movement of certain communities” and the “building of economic capital”. By the end of the book, readers will come to admire the sheer breadth of the book and will marvel at the fact that how the author was able to cover so many displacements and migrations in a single book. The book will surely open up a lot of debates that may eventually be probed into by researchers in the field of social sciences. For his methodology, the author has taken into deliberation not just economic factors to study migration patterns, but also social and cultural factors which are critical demarcating factors. Tumbe also mentions that the logo of IIM-A was taken from one of the carvings in the Sidi Saiyyed Mosque, built by Sidi – a group of people that migrated from East Africa to India.

Hence, if one is looking forward to reading a seminal work on Migration that has been done by an economist, they will certainly find this book to be quite an absorbing read. However, if one has been working on migration from the lens of History, they will find certain sections of the book familiar, but one could still read it to get a more surface level understanding of Migration in the context India. The book is more like an overview, which runs through centuries and hence, does not delve deeply into any topic. However, it would serve as a good reference book on the history of migration in India, from the ancient times. Although it is not the most comprehensive book on the History of migration in India, it is definitely a primer on migration in India.

The writer is a Doctoral Candidate at the Department of History, University of Hyderabad, India. She's a Fulbright Scholar for 2020-2021 to the US. She can be reached on twitter @paroollll

Impact of COVID-19 on the Digital Sector

Do or Die, or Quit