Why We Should All Be Feminists?

In July 2018, The Observer listed Chimamanda Adichie’s ‘We Should All Be Feminists’ as one of the ‘Best brainy books of this decade’. The book-length essay is an adaptation of Chimamanda’s 2012 TEDx Talk, with the same title. What makes the book so relevant, a continued bestseller, and so valuable in the times we live in?

W e Should All Be Feminists’ is the read of the hour, a flag-bearer of the fourth wave of feminism. Chimamanda Adichie deconstructs the term ‘feminist’ from the layers of social, personal and sexual representations, to make the reader see its importance in women’s lives and their choices everyday.

The book opens with Chimamanda’s relationship with her childhood best friend, Okoloma, who introduced her to the word ‘feminist’ by informing her that she was one. That information was not a compliment, rather a word of caution. Because at 14 years of age, Chimamanda did not know the literal meaning of the word, but she knew what it implied.

She then explains that in a Nigerian society, being a feminist meant — “you hate men, you hate bras, you hate African culture, you think women should always be in-charge, you don’t wear make-up, you don’t shave, you’re always angry, you don’t have a sense of humour, and you don’t use deodorant.”

The book focuses on this statement’s underlying context, challenging notions of womanhood, masculinity, gender equality, wage gap, matrimony and class structures existing in the Nigerian society. By asking tough questions around these ideas, Chimamanda opens the reader’s eyes to the insecurities harboured within a society that has internalised patriarchy and sexism to a dangerous level of normalcy.

“The author brings context to these insecurities through her personal experiences of living in Nigeria, and by observing the behavioural changes her women friends make to adjust to the society’s expectations.”

Those experiences are so relatable, that one can stop reading, look around and find those exact same instances in life. And therein lies the power of this book. Chimamanda makes one see the roots of a gender-biased society, by connecting on a personal level.

She then brings out the problem with gender-prescription, and the expectation of living to those standards. And the answer to that problem lies in raising our girls and boys differently, Chimamanda concludes. Boys need to be given confidence in being vulnerable and be accepting of their emotions, while girls need to be raised with the confidence of being complete on their own.

Women therefore need to learn to claim their space, without shrinking to the needs of men. This, Chimamanda highlights, is the essence of feminism. A place where men and women are equal stakeholders in a society: emotionally and financially. 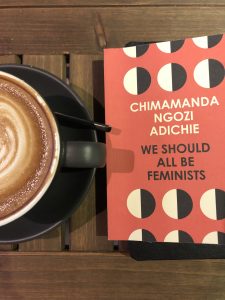 The book therefore calls for distilling the notion of gender rights from human rights. Because, as long as the history of one gender suppressing the other is not acknowledged, the solution will always remain skewed. It is only when men become feminists, can this acknowledgement turn into activism to amend the flaws of the society.

It is only when men recognise the biases that govern the general conduct of women’s lives and choices, can feminism truly become the norm of the day. When men and women become feminists, can just narratives be built, and cultures can evolve. As Chimamanda rightfully points out, “Culture does not make people. People make culture.”

The book’s strength lies in its similarity within different societies that cuts across borders. What Chimamanda states as patriarchal mindsets in a Nigerian society, imply to an Indian society as well. She talks about women being expected to cook, earn less than the husband, bear children, cover their bodies to avoid getting sexually assaulted, all of which are issues concerning women’s emancipation in India too.

“To any Indian woman, Chimamanda’s book is nothing short of a window to the experiences in her life.”

This book is ultimately, timeless. And that is the sad reality of our times. I say sadly, because I don’t know how long will it take for this book to become redundant. For someone to pick it up and think, “I can’t believe that women were treated so unjustly in those days.” Four years since the book released, and it holds more value than ever. Each one of us needs to pick up a copy. Each one of us needs to make the men in our lives read it. The book needs to be subscribed to in schools, so children can have an early start in understanding feminism and gender equality.

‘We Should All Be Feminists’ makes us question and it makes us ponder but in the end it poses tough challenges. The book does not discourage the readers of the present times rather it encourages them to stand up to the force of the patriarchal set-up that inhibits women to enable them to reach their full potential. And that’s the beauty of Chimamanda’s writing. She writes the toughest ideas and emotions profoundly with such simplicity that each reader goes home wiser.

A must read, ‘We Should All Be Feminists’, is not just one of the best brainy books, but simply one of the most significant books of the decade.

The writer is a public policy associate, based in Hong Kong. She can be reached on twitter @MariyamRaza

Full throttle on a note of parity