Shri Piyush Goyal holds over 50 meetings in three days with trade ministers of various countries, CEOs and leaders to push the India Story. 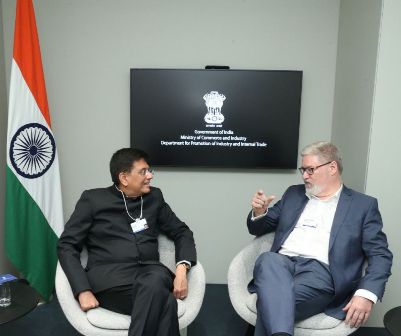 Distribution and Textiles, who led the team India at World Economic Forum (WEF) in Davos from 23-25 May 2022, finished his trip with several high-level engagements aimed at projecting India as a reliable partner, a stable economy and an attractive investment destination. Shri Goyal, who was accompanied by two Union Ministers, viz. Shri Mansukh Mandaviya, Union Minister for Health & Family Welfare and Shri Hardeep Puri, Union Minister for Petroleum & Natural Gas, leveraged the WEF platform to help further reinforce its position as a crucial stakeholder in shaping the global narrative.

Shri Goyal also addressed several sessions, including the Breakfast session Discussion on Trade 4.0, Invest India Round Table on Investment in India, India at 75: Strategic Outlook, The 2030 Industrial Development Agenda and ‘Trade now: what’. In his address, the minister emphasized that the India story had been receiving a lot of enthusiasm across the world despite constraints like Covid 19, chip shortages, conflict, rising commodity prices, container shortages and significant shipping and logistics issues, which caused massive supply chain disruptions and threw the global economy off balance. Speaking about the recent wheat export regulation, the Minister emphasized that India’s wheat exports are less than 1% of world trade, and our export regulation should not affect global markets. He said that India would continue to allow exports to vulnerable countries and neighbours.

In his next leg of the two-day tour, Shri Goyal is reaching the UK tomorrow, where he will hold discussions with UK Government and businesses on the progress made in FTA negotiations and the way forward. During the Summit Meeting between the Prime Ministers of India and the UK, the two leaders set the timeline of Diwali 2022 to finalise the FTA between the two countries.

On line Belarus Going out with Safety Suggestions