With the advent of the pandemic, many of these issues have resurged with a vengeance. In a time of flux, as the world adjusts to a new normal, the time is now to make it equitable for all irrespective of gender, class and ability.

The plight of gender inequity in India is scarcely a secret. The country, like most of the world, is plagued with regressive patriarchal social norms, customs and practices, which 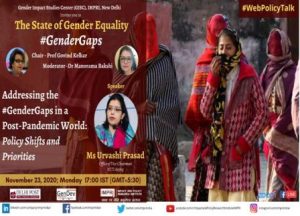 seep into the socio-political structures prevalent today. Needless to say, it has made it even more difficult to properly achieve gender parity in all walks of life. The COVID-19 pandemic has only exacerbated the situation, and there is need for strengthening pre-existing policies as well as introducing newer measures to achieve the Sustainable Development Goals (SDGs).

“While the magnitude of the change still has plenty of room for improvement, India has undeniably bettered in the past decade on the gender front. The economic survey of India (ESI) 2018 features the significant improvement accomplished from 2005-06 to 2015-16 as per the statistics by the National Family Health Survey (NFHS). Out of the 17 indicators determining women’s agency, 14 – including institutional deliveries, bank accounts, literacy, BMI, age of marriage – have shown a significant progress”, said Urvashi Prasad, NITI Aayog. She was speaking at the webinar “Addressing the #GenderGaps in a Post Pandemic World: Policy Shifts and Priorities” organised by the Gender Impact Studies Centre (GISC), Impact and Policy Research Institute (IMPRI), New Delhi, the Delhi Post and GenDev Centre for Research and Innovation, Gurugram. Pankhuri Dutt from NITI Aayog also attended and spoke at the webinar moderated by Prof Govind Kelkar, GenDev Centre for Research and Innovation, Gurugram.

Urvashi Prasad highlighted some governmental schemes like MGNREGA, Deen Dayal Antyodaya Yojana, PMJDY and the flagship MUDRA Yojana, which have shown improvement exceeding expectations. Along with an increased participation in the formal sector, courtesy of schemes like MGNREGA, the trend extends to a larger political participation, albeit limited to panchayat and other lower rungs of the administration. With increased and improved nutrition provision among younger girls as well as the Pradhan Mantri Matru Vandana Yojana, the maternity benefit programme and the institution of partial compensation for wage loss as a cash incentive for female labour force participation, there has been a commendably holistic development for women in all walks of life.

However, Prasad points out, there are still graver challenges to tackle. A 2013-15 based NITI Aayog study reported that sex ratio has shown deterioration in 17 out of 21 large states. The 2018 ESI has explained how this prevalent sex selective abortion has led to an estimated 63 million “missing women”. For others, families still adhering to a meta-preference for sons have led to 21 million “unwanted girls”. These same social norms are responsible for the abject neglect for women’s health and nutrition requirements. Further research reveals shocking statistics: India had the highest number of deaths due to cervical cancer in 2018, mostly due to inaccessibility to screening and required amenities. About half of the female population in 15-49 years of age is anaemic. In terms of mental health, the prospects aren’t promising either with 71 per cent of suicides in the ages of 15-39 being women.

Another mammoth of a challenge in the Indian economy is the dismal female labour force participation.

Also Read : Gender Gaps and Gender Equality: Why it Matters?

While the government has blazed new trails in the formal sector, the informal sector – which employs a majority of Indian women – remains largely untouched. Even within the formal sector, there are several hindrances like workplace distance, inflexible working hours, non-availability of crèches as well as lower preference to women re-entering the workforce, actively deter female participation. Women’s self-help cooperatives and female entrepreneurs in general lack a major access to credit, hampering them from entrepreneurship as well as service.

The most horrific challenge of them all is the unperturbed escalation in violence against women over the years. The National Crime Record Bureau (NCRB) reported a record of an average of 87 rape cases daily. Sexual and physical violence is rampant, affecting one-third of women aged 15–49 years, according to the NHFS 2016.

A CNNS 2018 report extensively detailed the large variation in high-impact interventions for women, like iron-folic acid intake, post-natal care and institutional deliveries. The NITI SDG Index studying female agency shows a gloomier picture with, sparing 3-4 union territories, all of India touting disappointing figures. It also highlights the sizable variation in states in terms of sex ratio and total fertility rates. The NFHS revealed a meagre 4 per cent dip in physical or sexual violence reports from 1995-99 to 2010-14. While five major states saw a significant reduction in spousal violence and five more displayed status quo, the condition of the majority leaves much to be desired.

From a global standpoint, the things seem murkier. India dropped five places from 2018-19 to 2019-20 in the World Economic Forum’s (WEF) Global Gender Gap Index. The index measures economic, health and survival, political and educational gender gaps in countries across the world. In the health parameter India ranks tragically 150th out of 153 countries. It is also the only country with an economic gap higher than a political one. The educational gap is also quite pronounced with barely two-thirds of women being literate as compared to 82 per cent of men.

Ms Prasad pointed out a novel way of international comparison: instead of looking up to the examples of developed Nordic states, India can draw inspiration from its poorer counterparts. She provided the example of Rwanda, which after its 1994 genocide, improved on gender equity by leaps and bounds through crucial social and constitutional reforms. Women in Rwanda account for two-thirds of the Parliament, 52.5 per cent of the secondary enrolees and 54 per cent of the total workforce. With its educational and health investments, Rwanda boasts the smallest gender pay gap in the world.

Drawing inspiration from the same, Ms Prasad proposed the establishment of an independent Gender Monitoring Unit for India’s way forward. The idea is to centralise the data collation from different departments and ministries as well as regularise the process by setting tangible, time-bound targets. After a positive response from the health index, NITI has a gender index next in its books. Accounting for women’s development in educational, health, financial and entrepreneurial sectors, the index also is planned to be inclusive of women generally neglected in policymaking (like widows, disabled women). Instead of ranking the states in different issues, the index aims to give continuous and frequent feedbacks tailored to each state, so as to facilitate more efficient development. Sample indicators for the same include child sex ratio, percentage of anaemic women, percentage of girls completing secondary schools, maternal mortality rate, female labour force participation rate, percentage of female voters, incidences of crimes against women and enrolment of girls at primary school level.

NITI Aayog has specific solutions in mind for all of these sectors. Recently, it released the “Three Year Action Agenda” and “Strategy for India 75”, in which the need for skill development among women is highlighted. Financial incentives and raising the marriageable age can be utilised to curb dropout rates. Due to Digital India, women’s skill development in non-traditional roles (like electricians, taxi drivers, plumbers) can be enhanced more effectively. It has also made organisation of female workers in professional guilds smoother, gaining them bargaining power and occupational agency. However, pre-existing laws like Maternity Benefit Act, The Sexual Harassment of Women at Workplace (Prevention, Prohibition and Redressal) Act, also need to be effectively implemented for women in formal as well as informal sectors. Overall, there needs to be an amendment in the current legal framework to accommodate alternative employment options like Work from Home (WFH), part-time work and options for women re-entering the workforce. Companies can be incentivised by tax cuts for hiring women to smoothen the process.

Providing affordable housing and gender-friendly residential spaces with efficient connectivity and public transportation can immensely help. In the instance of crimes, the current protocol needs to be strengthened as well as groomed to tackle more modern issues like cybercrimes. Despite the existence of fast-track courts and online redressal processing mechanisms, the judiciary ought to be made more efficient to deal with its pending caseload. Societally, there is a dire need to de-stigmatise crimes against women and initiate empathetic dialogue for the same.

Public-Private-Personal Partnerships are aimed at the same. Correcting the under-representation of women has many seen and unseen stakeholders like corporates, politicians and civilians alike. Ms Dutt identifies how financial literacy in women leads to better investment in her children’s health and education. She further qualifies this argument with Dr Duflo’s research (2004) disadvantaged groups benefit more with women in-charge. The NITI Women Entrepreneurship Programme was ideated for the same.

Essentially, India has made path-breaking changes in women’s empowerment today. Prof Kelkar expressed that contemporaneous masculinised social norms ought to be revised for modernity in political, social and economic outlook. From raising issues of domestic violence to the novel conundrum associated with female unpaid labour in “care work”, an intersectional feminist approach is key in achieving any long-term resolution.