“Parliament of India-Diverse Dimensions” stands out as one of its kind as an account by a parliamentary officer endowed with rich institutional knowledge.

It was worth reading experience of the new book “Parliament of India-Diverse Dimensions” by Ravindra Garimella. Garimella recently retired as the Joint Secretary from the Lok Sabha Secretariat 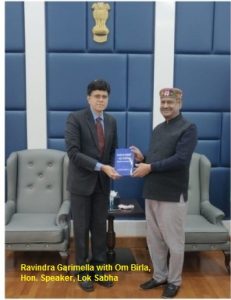 Books on Parliament are rare commodity for the simple reason,as unlike judicial decisions the practices and procedure of Parliament is an esoteric field, which only people immersed in the functioning of the Houses of the Parliament can claim expertise in the subject. The strength of the British Parliament as pointed by A.V. Dicey is the conventions of the constitution evolved by the House of Commons over many centuries through its practices and procedures. Many of these conventions are unwritten, but sanctified by acquiescence and reverence shown by all the stakeholders.

Like the House of Commons, our Lok Sabha has evolved over the years conventions which all members are bound to observe. Only through the treatise like May`s Parliamentary Practice or Kaul and Shakdher’s Practice and Procedure of Parliament we can learn about these conventions. Viewed in this background, Garimella`s Parliament of India-Diverse Dimensions is a welcome addition to the scarce literature on the Indian parliamentary practices and procedure.With over three decades of experience as a parliamentary officer in legislative service in Lok Sabha Secretariat and a quarter century of experience as an Officer at the Table of the House (Lok Sabha), Garimella in his ten articles in the book provides us an insight into working of Parliament going into finer details from a practioner’s perspective. The uniqueness of this book is choice of topics, which the author chose to work on; the information contained therein would otherwise would not be that easy to access. In his first article, “Functioning of Democratic Institutions in India”, he sets the tone for what lays ahead in the book by bringing to fore the vibrancy and stolid nature of Democratic Polity in India. In his last chapter “A Day in the House (Lok Sabha)” he gives in simple crisp language an account of proceedings of the House, which is a kind of an eyewitness account conscious of general and growing interest of people from all strata of the society. In this article, while mentioning about the buzz in the Lok Sabha Chamber, he mentions “every day is a new day…”.

On the basis of my experience as Secretary General of Lok Sabha from 2010 to 2013, I can vouch safe for the ‘feel’ in the Lok Sabha Chamber while session is on, which he very well brought in this article.

Each article is well researched with authoritative references to the sources. In the article on “Parliamentary Expressions and Practices”, Garimella had gone into the origin of some oft heard terms for instance like Well of the 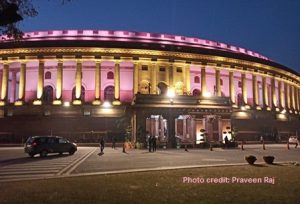 House; Catching the eye of the Speaker as also the Dress Code. He dwelt at length the origin of the colour green associated with House of Commons and colour red in House of Lords; which colour scheme is followed in Parliaments following the Westminster system of Democracy. In his article on Rituals and Ceremonies, he underscored the importance of these with a view to instill institutional regard. His article on Whips is also highly informative, to my knowledge this aspect has not been covered in such a detailed manner elsewhere. If anybody were to know about whips they just need to go through this article. He also documented procedural matters in a very systematic and meticulous manner.

“Parliament of India-Diverse Dimensions” stands out as one of its kind as an account by a parliamentary officer endowed with rich institutional knowledge. This would serve as very useful reference resource for Presiding Officers, parliamentarians, legislators, officers/officials of Parliament and State Legislatures, scholars researching on working of Parliament, and of course everybody who is interested in Parliament of India and its working.

The writer, a recipient of the Padmashree Award, is former Secretary General, Lok Sabha and Legal Advisor to former President of India, Pranab Mukherjee).