By 2025, more than 2.18 crore vehicles in India will be unfit. The Vehicle Scrappage Policy holds the potential to convert this junk into valuable economic and environmental gain.

At this time, there are 34 lakh vehicles in India that are older than 15 years, and 51 lakh motor vehicles which 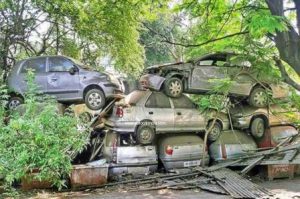 are older than 20 years. A staggering 17 lakh medium and heavy vehicles are older than 15 years. The use of such old vehicles causes around 10–12 times more pollution than a fit vehicle. Here, the Vehicle Scrappage Policy assures the scrapping of such old vehicles, which will achieve India’s climate commitments and increase the availability of raw materials for our steel and iron-based industries.

In the Union Budget 2021–2022, Finance Minister Nirmala Sitharaman announced the first-ever Vehicle Scrappage Policy. The policy proposes to formalize India’s vehicle scrappage industry and eliminate those vehicles that are old and unfit. This will help India reduce its pollution levels, increase its fuel efficiency, and have safer roads. This policy along with the promise of doubling India’s shipbreaking capacity will reduce the country’s scrap dependency on foreign scrap imports and help tame the carbon footprints of the automotive, steel, and electronics industries.

The policy outline defines the end-of-life vehicles and proposes scrapping them. With this policy, a 20-year-old private vehicle will be de-registered, if found unfit. It also ensures that every old vehicle receives 4%–6% scrap value against the price set for the new vehicle. It will also give a road tax rebate up to 15% on commercial vehicles and 25% on personal vehicles. Anyone with the scrapping certificate of the old car could avail 5% discount from the manufacturer of the new car and a waiver in its registration fee.

The fitness test and subsequent scrapping will come to effect from October 1, 2021. A mandatory test for all heavy vehicles would be conducted by the proposed deadline of October 2023 and for private vehicles by October 2024. Further, any vehicle that has been confiscated by government agencies, damaged, or declared defective, will be scrapped. All the data gathered from the scraping centers will be placed on the VAHAN database.

For the process of scrapping to function smoothly, the government will place fully automated test centers to check the vehicle’s fitness. These automated centers will allow no human interference or fudging of results and would be created in a collaborative effort of the state government and private firms. It will also implement scientific methods of safely disposing off waste material. In India, the vehicle scrapping industry is not organized and lacks key infrastructure. Most steel-producing countries use the method named Electric Arc Furnaces (EAF) but in India, EAF is used alongside Induction Furnaces.

Employment: Union Road Transport & Highways Minister Nitin Gadkari claims that once the policy is implemented, it will scrap 1 crore vehicles. This will open up employment with close to 50,000 jobs and an investment of INR 10,000 crore into India’s automobile industry.

Availability of ferrous material: The availability of ferrous scrap in India is very limited. After large forex spending, 6.5 million tonnes of scrap was imported in the year 2018–2019 and 2019–2020. Under this policy, a vehicle after getting scrapped will generate 70%–75% ferrous scrap and 6%–8% non-ferrous scrap, along with other scraps like rubber and plastic. The policy would be a source of joy for the steel industry, as their import order would now be reduced to having only natural gas and coking coal on their list.

Incentives versus Cost: The policy proposes a 15% discount on road tax for commercial vehicles and a 25% waive off on personal vehicles. It also discusses waivers on registration and discounts on the purchase of new vehicles. However, the center only “advises” the state government to do so; it is not mandated in the policy. The burden of providing incentives falls on the state government who gains significant state revenue from road tax and registration fees.

Currently, the cost of re-registration is INR 200 for light motor vehicles. For the fitness test, the owner would have to give INR 200 and an additional INR 100 for the issuance of the fitness certificate. After policy implementation, the owner would have to pay an additional amount for re-registration and fitness tests. An estimated cost for this is around INR 13,500. The cost can increase with delays or on the expiry of certificates.

Lack of infrastructure: The scale of this policy is huge and would require ample space for setting up automated Fitness Centers and scrap yards all over the country, with at least one in every district. The current infrastructure is unorganized and wouldn’t be able to tackle the load. Seeing the gaps, the government plans to build additional 718 fitness centuries in the country. The Ministry of Road Transport and Highway too plans to invest INR 17 crore in all the states. Yet, the task of creating new centers and upgrading old centers before October 2021 would be a huge task for the government.

Reception: Many road transport unions have not appreciated this policy and have demanded that the government take the inputs of the stakeholders and resubmit the policy in one to three months. The All India Road Transport Workers’ Federation claims that this policy will rob 80% of owners of owning commercial vehicles. This is because many find it hard to pay monthly installments on their loans. The additional cost would be an “unbearable burden on them and will lead to eliminating them from the field.”

The Kerala Lorry Owner’s Federation and the All-India Confederation of Goods Vehicle Owner’s Association have called this policy “not practical.” They believe that 50% of goods carriers in India would be labeled unfit based on the current policy criteria and scrapping them would not be a sound option for vehicle owners. A study conducted claims that a vehicle should not be called unfit just because of its age. Many factors, including maintenance, area of operation, and parts used influence the fitness of the vehicle.

A CSE report claims that more than 2.18 crore vehicles in India will be unfit by 2025. This policy has great benefits to turn this junk into valuable scrap both economically and environmentally. But the government should implement this policy after discussions and negotiations with every stakeholder.