The trend of internet shutdowns – for everything from anticipation of protests to cheating in public service exams – has intensified in the last few years. Why should we care? 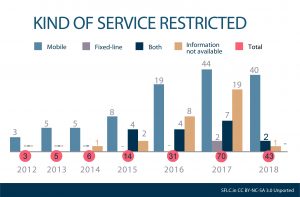 W ith 96 internet shutdowns reported as of August 2018, the year has already seen more shutdowns than the combined figures from 2012-2016 of 59 as per the data by the legal services organisation, Software Freedom Law Centre’s Internet Shutdown Tracker.

On August 9, due to the Maratha quota agitation, internet services were suspended in Pune to prevent the spread of rumours and maintain law and order. On August 5, Rajasthan saw internet being blacked out to prevent mass cheating during exams after a two-day shutdown in July. Reportedly, while Jammu and Kashmir has suspended internet services 35 times, Rajasthan has witnessed 26 recorded internet shutdowns within this year.

One of the most reported incidents was in Arunachal Pradesh on July 29 where services were terminated intermittently throughout the day to prevent cheating in the state public service commission examinations. In Manipur, over Manipur University Student Union’s confrontation with the police, services were suspended for a period of five days.

“Done in the wake of growing protests, unrest and possible riot situations via provocative messages on social media channels, central and state governments have largely continued to adhere to such blackouts” 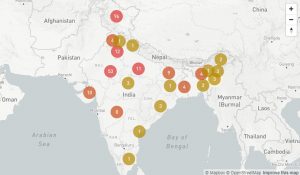 Concurs Nayanatara Ranganathan, who manages the Freedom of Expression programme at the Internet Democracy Project, and tells Delhi Post, “This trend of shutdowns – for everything from anticipation of protests to cheating in public service exams – has intensified in the last few years. Despite economic, social and health consequences, it continues as a common measure.”

Ordered under the Temporary Suspension of Telecom Services Rules, 2017 under the Telegraph Act, internet shutdowns enable state and central governments to order suspension of internet services “due to public emergency or public safety”. On July 31, in the recently concluded Monsoon Session of the Parliament, Congress’ Rajya Sabha MP Husain Dalwai called for annulment of the rule stating that it is an unconstitutional prior restraint on free speech, which Ranganathan believes is a “welcome move”.

SFLC.in has been actively mapping internet shutdowns on the tracker based on news reports starting from the year 2012 with the help of lawyers, policy analysts, technologists, and students. A spokesperson from SFLC.in tells Delhi Post, “There are two important aspects to consider. One is that these shutdowns have been mapped based on news reports which means they are based on secondary sources. Second, there may be many unreported shutdowns.”

The spokesperson indicates what has been on the minds of many internet rights’ activists.

“Are internet shutdowns the only answer and the most effective one to prevent mishappenings in a country as vast as India and as thriving a democracy as hers?”

A cyber security enthusiast, Mudit Jain Sethia, seems to agree, and shares with Delhi Post, “Even as per the Constitution, national security supersedes freedom of speech. If there is a potential harm to India or Indians, I don’t see why internet shutdown should be an issue to restore normalcy!”

However, there are many others who point out the blatant use of blackouts which has impacted day-to-day activities, disrupted businesses and kept people from a need as basic as access to information. SFCL.in’s spokesperson apprises Delhi Post, “It is a clear lack on the part of law enforcement and law and order authorities of the states. Shutting down internet services in case of exigencies is problematic for millions who depend on the internet.”

A story of differing Quo-Vadis