Large multinational enterprises with significant influence over global supply chain are in unique position to influence the suppliers, recruitment agencies to ensure labour standards, human rights and place a mechanism for transitional justice.

Migrant workers have been subjected to gross violations of their labour rights on a large scale including the very important issue of ‘wage theft’. Civil society and various actors 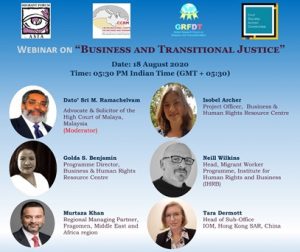 have made a call for transitional justice mechanism to be put in place so that migrant workers would be able to access their legal rights and thus justice can be delivered. The role of public and private sectors to ensure accountability in terms of justice mechanism is important.

“Dispute resolution mechanism should be made adequate and reachable. There is the need of urgency to look into business in preventing labour and human rights abuses and for businesses to be guided by the UN guiding principles”, said Dato’ Sri M. Ramachelvam, an advocate and solicitor of the high court of Malaya, Malaysia. He was moderating the webinar session titled “Business and Transitional Justice”, which was organised by the Global Research Forum on Diaspora and Transnationalism (GRFDT) along with Migrant Forum Asia, Cross-Regional Center For Refugees and Migrant and Civil Society Action Committee. Ramachelvam further shared further that the pretext of transitional justice, as per the International Centre for Transitional Justice, an emphasis was made on the relationship between law and politics as well as the notion of dignity.

The expert panelists in the webinar looked at the relationship between the business continuity mechanism and migrant workers’ rights.

Business house put the migrant workers in a difficult situation to seek justice. Migrants are fearful of speaking out as they may be detained, restricted from moving out and in some cases imprisoned as well. Isobel Archer, Project Officer for Migrant Workers in Qatar and UAE with the Business and Human Rights Resource Center, discussed on the company responding to public allegations. She further explains “The research conducted by the center found that the rate of company responding publicly dropped to around 20–25 per cent on average across the six major Gulf countries”. Furthermore, Gulf countries are characterised by the restriction imposed around human rights, labour rights and unionizing, which constricts the migrant workers to seek justice. The other looming difficulty for tracking the labour abuses around the Gulf is the organisational setup where the chains of ownership are hard to pick by. This in regards creates the challenging questions on “Where does the responsibility of the migrant workers lie when they face issue?” However, during the time of April and mid-July of 2020, there has been monumental increase in the allegations compared to last year, and this increase is under 400 per cent.

COVID-19 has had huge factor to play in the recorded cases in which most cases pointed to the lack of access to medical care, workers being stranded and workers not being paid with employers citing economic downturn.

There has also been big gap between companies’ policy commitment and the factory implementation. Golda S. Benjamin, Programme Director of Business and Human Rights Resource Center, placed emphasis on the garment sector in the Asia region. There is lack of COVID-19 safety precautions in the garment industries all over Asia. In 4 out of 10,i.e., Pakistan, Bangladesh, Myanmar and Philippines, garment workers protesting over unpaid wages have been subjectedto violent crackdown. In addition to this, workers having membership with the union have been sacked in apparel companies and the sacking of workers figured around 5000.

In order to curb down the mishandling of the migrant workers in the workplace, it has to be ensured that they are recruited in a fair, legal and humane manner. Marie Apostol, who have worked on the recruitment process through fair hiring initiatives brought to light the certification model that helps to improve the performance of recruitment agencies on both sending and receiving countries. It could prevent the issues of trafficking, debt bondage, forced 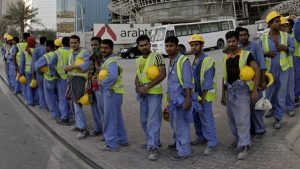 labor and issues related to employment like contract violations. She further states “For the recruitment practices to have clarity and consistent, civil societies have to get involved in testing the grievance mechanisms.” She also pointed to the fact that recruitment agencies are looking into the increasing cost up to 40 per cent per employee. The employment phase model will now look into the cost like quarantine cost, personal protection equipment (PPE), flight and others that have been surfaced due to the pandemic. However, the desperation among the workers will be more in finding jobs and as she brought out, the workers will be doing any job available. This in turn will increase the workers vulnerability to exploitation. On the other hand, as Marie brought to light that the institution have to look into the pertinent questions on the control and mitigation mechanism such as transitional justice to curb the vulnerability that the workers might face.

Murtaza Khan, Regional Managing Partner of Fragomen based in Middle East and Africa region, also indicated that the recruitment process is the first entry point and a special attention needs to be given to that process. He further points to the fact that the recruitment agencies that the company are using and the process should be in ethical principles in terms of local legislation that sits in part with the international standards. In today’s fast-paced technological world, non-compliance risk to the company adds huge administrative as well as legal cost and not to forget the reputational cost. Thus ethical fair recruitment will be beneficial for the company. However, he also clarified that companies alone cannot solve the unscrupulous recruitment process and government regulation framework is a must.

The landscape becomes even more complex when the recruitment involves multiple countries, sub-agencies and this further entails that bilateral and multilateral cooperation between the government agencies.

The Montreal Recommendations on Recruitment: A Road Map towards Better Regulation is the way forward to ensure fair and ethical recruitment process, which was highlighted in the session by Neil Wilkins. The recommendations has worked on the protection of migrant workers through recruitment regulation along with recruitment fees, bilateral mechanism, dispute resolution, grievance mechanism, legal compliance standards and administration introspection. Businesses have a role to play in disseminating the information through their supply chain. The COVID-19 have now created a discussion in the “gig-economy” jobs as well, which are to be viewed in retrospection. Migrants who represent less than 5 per cent of global workforce make up to 25 per cent of modern-day slaves that are accelerated as a matter of debt bondage. The challenges have been well seen by the concerned institution. Tara Dermott from IOM (International Organization for Migration) Hong Kong reference to the UN 2030 agenda, which has recognised migration as an important global factor for development could be decisive for upholding rights of migrants. Similarly, Objective 6 of the Global Compact for Migration is to facilitate fair and ethical recruitment and safeguard the conditions for decent work. Furthermore, a call for the ethical recruitment based on IRIS (International Recruitment Integrity System) standards is to be expedited. Large multinational enterprises with significant influence over global supply chain are in unique position to influence the suppliers, recruitment agencies to ensure labour standards, human rights and place a mechanism for transitional justice.

The writer is currently pursuing Master’s Programme in Conflict, Peace and Development Studies, Tribhuvan University, Nepal. He can be reached on twitter @pratik_satyal.

COVID-19: Business and Human Rights in the Spotlight