In a democratic system of governance, Parliamentary Committees and their Reports have a very significant 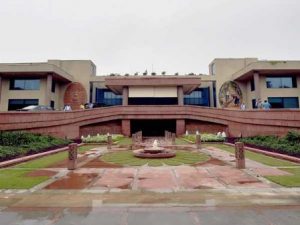 place. Parliamentary Committees are an extension of the Parliament and offer an experience that is congenial and conducive for in-depth deliberations in a more relaxed manner and mostly shorn of party rivalries.

At the outset, of course, it would be the language, manner, and phraseology style in which PCRs are drafted. Well, these need to and ought to be lucid and analytical; finally, the recommendations have to be spelled out in clear and unambiguous terms.

PCRs have immensely contributed to the rich legacy of our Parliamentary System and parliamentary literature. We have had some instances in otherwise reports on very serious matters, where recourse was taken to literary interludes. These were welcomed as Zephyrs from at the least expected quarters and savored.

Through this article, I wish to bring out such amazing literary interludes in some Committee Reports. While the list is not exhaustive, a sincere attempt has been made to bring to fore the cerebral and literary side of our sagacious parliamentarians expressed with élan through some parliamentary reports.

Indian Parliament has had its share of instances of conducts unbecoming of MPs. The parliamentary Inquiry Committees which considered these matters came up with corrective measures. It was in these reports that literary quotes were also taken recourse to drive home their points with affective resonance.

Eleven MPs, (10 from Lok Sabha and 1 from Rajya Sabha) were expelled from the respective Houses in 2005 after a TV news report showed them accepting a bribe for tabling notices of parliament questions after suggestions from an Inquiry Committee constituted to look into the issue. The Inquiry Committee (at para 51 of the Report) observed, “The Committee considers this as a defining moment in the life of Parliament…A resolution moved by Pandit Nehru in 1951 the Provisional Parliament had expressed its outright abhorrence of any member accepting money in return for advocating some cause in Parliament. In this context, it would be apt to recall T. S. Eliot:

In yet another expose, a news channel showcased MPs from both houses indulging in irregularities in sanctioning development works under the Members of Parliament Local Area Development Scheme (MPLADS). In March 2006, Committees formed by both houses recommended expulsion and suspension. The Inquiry Committee (at para 66 of the Report) observed, “The strength of any system in its capacity to promptly correct aberrations which may creep in from time to time.” The Committee expressed happiness in discerning a firm resolve among the fraternity of Legislators to take urgent remedial action whenever the situation so demands, to reclaim the pristine glory of legislative bodies in the country. In this context, the Committee cited the following quotation of Ralph Waldo Emerson:

The moral sense reappears today with the same morning newness that has been from of old the foundation of beauty and strength. You say there is no religion now “This like saying in rainy weather, there is no sun” when at that moment we are witnessing one of its superlative effects.

Instance of Improper Conduct and Impropriety by a Member

In yet another instance in 14th LS, an MP was reprimanded and suspended on a motion adopted by the House on 30 August in pursuance of the recommendations in the PCR by Committee to Inquire into the Misconduct of Members of LS. The Committee in their Report (at para 58) underscoring the importance of moral principles, which the Legislators are required to adhere to, quoted Thomas Jefferson:

Man was destined for society. This morality, therefore, was to be found to this object. He was endowed with a sense of right and wrong merely relative to this. This sense is as much part of his nature, as the sense of hearing, seeing, feeling; it is the true foundation of morality.

Another Case of Improper Conduct by a Member

In 2007, the Inquiry Committee analyzed another case that pertained to alleged misconduct by a member through involvement in human trafficking. In their Third Report,4 the Committee recommended the expulsion of the concerned member from the membership of the House, which was adopted by the LS on October 21, 2008.

Certain observations made by the Committee in their collective wisdom and their sage counsel augurs well and inspires trust in the effectiveness of India’s democratic polity. The Committee’s relevant observations followed by apt quotes bear testimony to this.

It is indeed distressing for the Committee that more and more cases of misconduct by members are coming to the fore. But just as a coin has two sides, so do situations. It is a matter of perspective. If on one side there is an increase in incidence in instances of misconduct, on the other hand, unlike in earlier times, the fraternity of legislators has been proactive in taking quick punitive action against their wayward brethren.

It has been rightly said, “It is not the severity of punishment that acts a deterrent. It is its inevitability.”

The Committee to inquire into misconduct of Members of LS constituted by the Speaker (Fourteenth LS) on May 16, 2007, in their Second Report gave details of misconduct. This is by far one of the most well-researched and illuminating Reports on the ethical aspects, and also comprises some quotable quotes, which are topical to the subject being dealt with. Some of these include:

Ayn Rand, the famous novelist says “ethics is a code of values which guide our choices and actions and determine the purpose and course of our lives.” (Para 18, page 11 of the Report)

Gandhiji said, “I have always derived my politics from ethics….. It is because I swear by ethics that I find myself in politics….” (Ethics and Politics – para 23, p12 of the Report)

James Madison has said, “The aim of every political constitution, is or ought to be, first to obtain for rulers men who possess most wisdom to discern, and most virtue to pursue, the common good of society; and in the next place to take most effectual precautions for keeping them virtuous whilst they continue to hold their public trust.”

The Committee also quoted from Transparency International as follows:

The legislature plays a key role in promoting good governance and curbing corruption and poor administration in all sectors of society. Citizens expect parliamentarians to serve out of conviction and a commitment to the public good, rather than for aspirations of personal power and the pursuit of private profit. In turn, they are conferred the legitimate authority to make decisions that determine the fortunes of both the State and its citizens.

The Committee on the aspect of Conflict of Interest quoted Peter Eigen, Chairman, Transparency International as under:

Throughout the world, people are increasingly angry with how public power has been manipulated for private profit. The messages we get from our national chapters in every corner of the globe is that they want to see clear and clearly understood the conflict of interest rules…

The Committee in their final para (101) of Conclusions cited the following:

Bertrand Russell has said, “Without civic morality communities perish; without personal morality, their survival has no value.”

Swami Vivekananda has said, “Every successful man must have behind him somewhere, tremendous integrity, tremendous sincerity.”

In 2007, the Indo-US Nuclear Agreement became a contentious issue and even found its echo within the portals of Parliament. The then Indian Ambassador in the United States (Mr Ronen Sen) in an interview alluding to opponents (opposing MPs) had stated, “Parliamentarians are like headless chickens… They don’t even seem to be aware of what they are saying, the import of what they are saying.”

This was taken serious objection to by some members and they gave notices of the question of privilege in both Houses of Parliament against Mr Sen for casting aspersions on MPs.

While the Committee of Privileges (14th LS) dealt with the issue in their Ninth Report and, keeping in view unconditional apology tendered by Mr Sen, recommended the matter be closed, the matter was dealt with in-depth. The Committee in their Report (at para 21) stated.

The Committee observes that the term “headless chicken” has been defined as follows:

On the need for discretion, the Committee (at para 39 of the Report) observed “The Committee are here reminded of a very apt proverb: Discretion in Speech is more important than eloquence.”

In this context, the Committee would cite the following quotation by Joseph Addison, the founder-editor of The Spectator magazine in 1789:

There are many shining qualities of the mind of man: but none so useful as discretion. It is this which gives a value to all the rest, and sets them at work in their proper places and turns them to the advantages of their possessor. Without it, learning is pedantry; wit, impertinence; virtue itself looks like weakness, and the best parts only qualify a man to be more sparingly in errors, and active to his prejudice. though a man has all other perfections and wants discretion, he will be of no great consequence in the world; but if he has this single talent in perfection, and but a common share of others, he may do what he pleases in his station of life.

The matter relates to the improper conduct of a member of LS of having an unauthorized video recording of the security arrangements of Parliament House Estate etc. and brought it in the public domain by live-streaming it on social media. An Inquiry Committee constituted by LS Speaker recommended suspension, which was followed through. The Inquiry Committee did draw upon literary allusions here as well.

Committee would like to draw attention to the teachings of wise men who have equated unwisely, bold or a rash act to foolhardiness as personified by the character of Don Quixote as portrayed by the great Spanish writer Miguel de Cervantes in his celebrated work “Don Quixote.”

In this connection, it is pertinent to cite the following quotation of German Writer and Statesman Johann Wolfgang von Goethe which aptly describe the conduct of in question

There is nothing frightful than ignorance in action.

This showcases the multihued dimension of our Parliament and Parliamentarians, which indeed augurs well for our vibrant democratic polity.

The writer is a regular correspondent of “The Parliamentarian” CPA, London and presently Secretary to the Leader of Opposition, RS; formerly Joint Secretary ( Legislation) and Consultant, LS Secretariat, Parliament of India

New Biomarker to Distinguish Between Bacterial and Viral Infections

Who Should or Shouldn’t Take the COVID-19 Vaccine?