Several repatriated migrant workers await their due wages, months after they were forced to come home due to the Covid-19 pandemic.

The Covid-19 pandemic surfaced extreme deprivation for migrant workers, with many kicked out of jobs 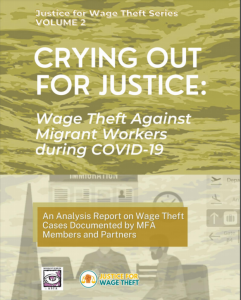 without payment of their due wages. Those who crossed international borders to seek work were forced to return to home countries without salaries and end-of-service benefits. Workers residing in the South-Asian countries of India, Bangladesh, Nepal, and the Phillippines, among others, bore the brunt of the wage-theft impact, since they make up the largest group of migrant origin countries.

The members of the Migrant Forum in Asia (MFA) came together to analyse the number of migrant workers who had been repatriated to their origin countries without their due salaries after the Covid-19 pandemic hit. The team released its second report of this bi-annual analysis and documented the cases of wage theft from the period of January and May 2021. This period coincides with the second wave of Covid-19 in several countries.

The release of this report on June 30th marks the first anniversary of the Justice for Wage Theft campaign, which is a joint project of trade unions and civil society organizations inaugurated in June 2020. The campaign calls for swift justice mechanisms for repatriated migrant workers who have been living their lives waiting for their due wages.

The report found that 1,113 new cases were registered on the JWT-Uwazi platform, a portal for repatriated migrant workers to register complaints, between January and May 2021. While 175 of these were individual cases, 22 were group cases. A majority of these cases occurred in the United Arab Emirates (357), with Saudi Arabia (252) and Kuwait (82). Malaysia, the Philippines, Bahrain, Qatar, China, and Oman are some other countries of destination that registered close to 100 cases.

As for the countries of origin, 620 migrant workers who registered their cases for wage theft were from India. Roughly 200 were from Indonesia, 116 from Nepal, 115 from Bangladesh, and 62 from the Philippines.

The largest number of cases of wage theft were recorded from the construction sector (59%). This was followed by the manufacturing sector (13%), domestic work (10.33%) and retail (4%). Compared to the 2020 data analysed by MFA, there has also been a significant increase in the cases of wage theft reported in domestic work, retail and among office staff.

With thousands of migrant workers suffering from wage theft in the Asia region, the gravity of the issue across the globe is expected to be much more devastating in scale. Without proper procedures in place to document and monitor the grievances of migrant workers throughout the repatriation process, millions of cases of wage theft during the pandemic are predicted to go unaddressed. Moreover, migrants themselves are hesitant or refuse to report or file a case in fear of retaliation from employers and in fear of being unable to pursue new employment opportunities.

Further, the absence of an effective mechanism to aid migrant workers to get back their wages will lead to further exploitation. “They will only remain victims to an exploitative and unjust system that will continue to prevail in labour migration governance,” the report reads.

Within the 22 group cases that were registered this year, the suffering of 938 individuals was recorded. A large number of group cases has become a far better indicator of corporate accountability affecting large companies of more than 100 workers. The majority of group cases were filed from India: 11 group cases, comprising of 741 migrant workers. In the Gulf Cooperation Council region, the workers who filed cases regarding wage theft in UAE were primarily from four countries. These included a substantive 324 cases from India, 13 from Bangladesh, 9 from Nepal, and 11 from the Philippines.

Also Read : Migrant Workers and Childcare in Thailand and Myanmar

From India, the maximum number of wage theft cases were registered in UAE, accounting for 51.9% of the total caseload, followed by Kuwait (27.1%) and KSA (20.6%). The report states that a high number of undocumented cases of wage theft in Kuwait were Indian males in the construction industry.

A gender analysis of wage theft cases concluded that female migrants in the care sector were most affected. Apart from domestic work, female migrants in the field of hospitality, sanitation, and salons, spas, etc, were reported as being affected by wage theft. “In many cases, origin countries were willfully ignorant of ground realities of abuse that occurs at their place of work, thereby dehumanizing the female migrant worker and removing her from accessing her human and labour rights,” it read.

“There is a continued lack of access to justice mechanisms further revealed in this time of crisis. Undeniably, there is a need for increased, proactive, bilateral multi-stakeholder dialogue and collaboration to address such situations [of wage theft] underlined by the data we all collect, which we have the responsibility to collect,” Nenette Motus, Regional Director of the International Organization for Migration (IOM) Asia-Pacific, said.

The report in mention, ‘Crying Out For Justice: Wage Theft Against Migrant Workers during Covid-19’, can be accessed here.