Dr. Karan Singh Yadav, Lok Sabha MP and a Member of the Indian National Congress Party, represents the constituency of Alwar, Rajasthan. He was recently elected in a by-election held in 2018. He was Professor and Head of the cardiac surgery at the SMS Medical College, Jaipur. In a freewheeling chat with Delhi Post, Dr Yadav shares the issues that people in his constituency are facing, power politics in Rajasthan and how the Modi wave might be a passé. In this exclusive interview, he questions the present government as to why the ESIC medical college has not been started. The interview is part of #KnowMyConstituency series where Parliamentarians from across the country will shed light on their achievements and talk about their hopes for a better tomorrow. 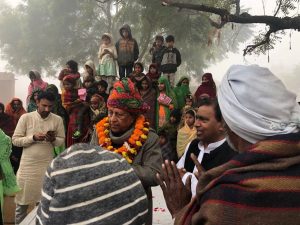 Dr Yadav: Alwar basically comprises of a rural population, 75 per cent is in the villages. It is an agrarian district, with little bit of industry around. The basic problem is of water shortage. There is hardly any drinking water, hardly any groundwater and the tubewells get dry every year. The industries picked up initially, some automobile industries came, but unfortunately, with the present government’s demonetisation and economic problems, the industry is not expanding. We had marked an area which was supposed to have been taken by Korea, but it is lying vacant now. No firm is coming out, and despite going abroad for investments, no investment is happening. After demonetisation, the working capacities of the industries have reduced; those who were running three shifts, run two now and those who were running two are only running single shifts now. A lot of layoff of the workers is happening; people who were on contract or were hired, have already been relieved and even permanent workers have been asked to find new jobs. It is an unfortunate scenario.

Dr Yadav: I am a doctor by profession, and a large number of people are suffering from asthma now, a large number are becoming cancer patients, and cardiac diseases are also prevalent. This is all related to pollution. Unfortunately, the mandatory provisions of disposal of gases and waste and the air pollution too is not only affecting human beings, but also crops. I recently visited one area, where factories are present, the place is called Sotanala around Behror, in almost 15 kms radius and the cotton crop is absolutely dried up, the leaves are totally shriveled and now, they would not bring out the fruits, so most of the farmers have re-ploughed the land and have put bajra as the crop. But in the initial swing, they spent more than Rs. 5000 per bigha, the cost is quite a bit. So farmers have already lost due to air pollution, it is damaging their crop and there is a very bad stench, in certain areas, from the malt factories. So these factories which came to Alwar in the name of industrialisation, have given Alwar diseases, made people sick and unfortunately, the government controls are not adequate. We keep writing to the Pollution Board, to meet the Environment Minister, but the industrialists have a high influence on the present government, so people don’t listen and say, “Why are you doing this? This industry will shift from here to Gujarat or some other place.”

Delhi Post: Rajasthan vows to be Open Defecation Free (ODF) before the national deadline of October 2, 2019. How do you think this can be achieved in Alwar where water crisis has always been a major issue? Asian Development Bank and Government of India supported Rajasthan Urban Infrastructure Development Project was undertaken in 2008, which focused on rehabilitation and expansion of water supply systems. Even after 10 years, the town’s drinking water and waste water supply is in shambles. To add to the woes, villages close to Siliserh Lake are resisting the allocation of water to Alwar?

Dr Yadav: It is a great aim, and village after village is putting a board to say that this is an ODF village, but the facts are contrary. The water is scarce, drinking water is a problem, so where should we get water for all these activities, so people find it easier to go to the farms. We all, as a society, wish that it becomes Open Defecation Free, but it’ll take some more time. The government claims it, but the facts are contrary.

Delhi Post: The ESIC medical college which was established in 2010, has been in news because it has not been brought into operation even after eight years of its establishment. What according to you are the reasons behind it? Will it be admitting students anytime soon?

Dr Yadav: It shows the working of the government. I wish you go and shoot that building, it is an 800 crore rupees building, which is not a small amount. It is a very huge building of medical college, very huge building of hospital which was supposed to be a multi-specialty hospital and a huge residential complex for doctors, nurses and the medical staff, and it is all lying vacant. In fact, the construction company, which is the UP Nirman Nigam, has asked ESIC to take possession of the building, but they have not taken it yet. They are now probably going to start a small dispensary due to the political pressure of the elections. It is a colossal waste of money. This project was conceived in UPA-I, completed in UPA-II, and the building has been totally complete for the last three and a half years. The present government and the labour ministry have refused to run it, as it is uneconomical, according to them. I feel this is a political vendetta because the scheme was started by the Congress, and there are many more examples in Rajasthan where the government will toe the line because the credit will go to the Congress government, for bringing it in place. Unfortunately, last Parliament session, no Member could get a chance to speak as it was a ‘government engineered disruption’, which means that those who were disrupting the session were the supporters or part of the NDA coalition. They would go in the well and raise placards and shout slogans so that we may not question the government on certain issues. We wanted to ask about Nirav Modi, and to avoid that, they didn’t allow Parliament to function and I couldn’t raise this issue. This is my main issue, I got elected on the promise that when I go to the Lok Sabha and question why this medical college has not been started. If the government can’t start it, then it should be sold off to a private entrepreneur if you can’t run it. Have the courage to say that the last government built this and we are selling it off. The people of Alwar are very dissatisfied and I must say that this is one of the reasons that the people of Alwar elected me by a margin of around 2 lakh votes where every successive election was being won by the BJP. In Alwar, they lost by a margin of one lakh ninety seven thousand six hundred forty votes, and we showed them the anger of the people against the government.

Delhi Post: How do you view BJP’s 3-0 defeat in Rajasthan which not impacts Rajasthan Assembly Elections this year, but will have ominous implications on national politics? Since 2014, BJP had been winning elections in states riding on the Modi factor. Do you think the rural voters are getting over the Modi wave?

Dr Yadav: The Modi wave has totally vanished, it is on a decline. On the same day elections were held in three segments, Ajmer, Alwar and Manikgarh assembly by-election, we won at every place. The margin in every assembly segment has been more than ten thousand. In one assembly segment, I scored 50,000 more votes than my rival and minimum was ten thousand. Similarly, our candidate in Ajmer, Mr. Raghu Sharma, he won by 80,000 votes. Similarly, our candidate in Manikgarh won by 10,000 votes. So overall, we fought in 17 assemblies in totally different areas, but the people’s perception was the same and result shows exactly that. So the people have realised that Modiji and his government make tall claims, they are good at it, giving speeches, convincing people; people had initially seen these people as leading lights for the country, now they have realised that these were all false promises and as a result, there is no crowd in Modi’s meetings. He had a meeting in which the government and its officials were involved, every government employee was asked to bring people and it was called a dialogue between the beneficiaries and Modiji. It was a political meeting, a start of election campaign, but they spent huge government money and it looked like they were doing government functions. In the last meeting in Jhunjhunu, people showed him black flags and the pandals were vacant. For Rajasthan, it is a foregone conclusion that the Congress government is coming, and any Rajasthani will have the same view, be it in Rajasthan, Delhi or abroad. It’s the same for Modiji, he has lost his shine, people are no longer attracted to his words. He is a monologue man, his Mann ki Baat is an example, he doesn’t want to engage in dialogue, even with the media. He does not hold press conferences, and if he does, only those questions which have prior approval are asked. So, Modiji’s charisma is lost.

Dr Yadav: I am grateful to Delhi Post who took enough trouble to come and take my interview, and I am happy that they have researched the questions very well, regarding my constituency. Water is a big problem. There is a project called the Eastern Rajasthan Canal, we wanted to bring it in our tenure, but it’s only on paper, they shelved it. It is of the utmost priority otherwise people will starve and die of thirst in Alwar in times to come.
Thank you very much Delhi Post.