With fewer children, households in India can save at least one-fifth of their total out-of-pocket expenditure on components of child care, says a new report on cost of inaction in family planning in India. 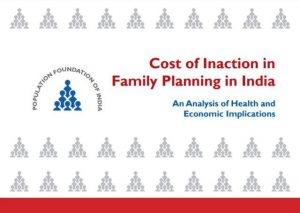 I ndia will add an extra population of 149 million by 2031 with High Focus States accounting for 50 per cent of the population if appropriate investments in family planning are not made within the next 15 years up until 2031, says a new study.

Inability to plan the number of children and having family sizes larger than the family had planned for leads to higher infant mortality which in turn leads to poorer health outcomes for the mother and the child resulting in reduced human capital investments not just on this child but on all the other children in the family. As a method of contraception, the family then relies on female sterilisation which is a costly contraception method.

The report, ‘Cost of Inaction in Family Planning in India: An Analysis of Health and Economic Implications’(COI) notes that if emerging priorities such as reaching the vulnerable, especially youth and women with lower parity is not achieved, then there could be “severe implications on demographic and health indicators by 2031”, especially in the High Focus States of Uttar Pradesh, Rajasthan, Bihar and Madhya Pradesh – constituting 37 per cent of the total population yet lagging behind in most family planning indicators.

The study has been brought out by national NGO Population Foundation of India (PFI) in collaboration with the autonomous body Indian Institute of Economic Growth under Government of India.

“COI states that effective family planning policies can have a discernible influence directly or indirectly on all the 17 Sustainable Development Goals (SDGs) such that they have been recognised as a development “best buy”.” 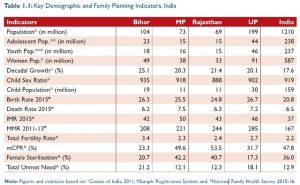 “India is a young nation with two-thirds of its population below 35 years of age. Given this age structure, the country will witness a growth in population over the next 30 years. We therefore, have a window of 30 years to capitalise on this opportunity, making now the best time to push for greater investments in family planning in order to reap the benefits of this demographic dividend. While good policies are in place in India, we could greatly gain from implementation of these policies to their full potential,” Poonam Muttreja, Executive Director, PFI told Delhi Post.

As per the COI study, there could be additional infant deaths of 2.9 million with 86 per cent occurring in the High Focus States,out of which Uttar Pradesh would account for 41 per cent of such deaths. The report also estimates additional maternal deaths of 1.2 million with these states contributing 58 per cent. An estimated 42 per cent of unsafe abortions can be prevented if there is access to contraceptives in the four states, the report notes. Sixty nine million additional newborns will be born in the four states within the eight Empowered Action Group states.

“While we have quantified the demographic and economic impacts of inaction in family planning, it is equally important to understand the hardships of families, particularly the quality of life of mothers and children. Clearly, in one way or the other, inaction affects our daily lives and this can be a momentous occasion to realise that all is not lost,” said Dr. William Joe of IEG, one of the lead researchers of the study.

Considering that India has had a long and turbulent family planning history including a coercive target approach, a policy articulating a reproductive health and rights paradigm, contraceptive-specific incentives, and a family planning camp approach – the country is yet to reap the benefits of such initiatives.

“The study estimates that with increased investments in family planning over 15 years, India would not only save as much as Rs 27,000 crores in public health spending and redirect it to other health priorities, but also enable its citizens to save Rs 71,500 crores of out-of-pocket expenditures on child birth and child hospitalisation.” 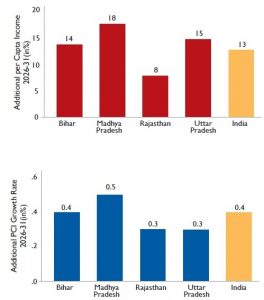 It highlights the benefits of strengthening family planning strategies at the community, state and national level.With fewer children, households in India can save at least one-fifth of their total out-of-pocket expenditure on components of child care in Madhya Pradesh with 35 per cent and Uttar Pradesh with 30 per cent.

“These include an additional 13 per cent increase in per capita Gross Domestic Product and savings of up to 270 billion rupees to the National Health Mission budget,” said Muttreja.

The report was released on the occasion of PFI’s JRD Tata Oration lecture series on population and development issues, where the 14th edition of the lecture was delivered by Dr Rajiv Kumar, Vice Chairman, NITI Aayog. He said, “One of the most important conditions for realising the demographic dividend is women’s empowerment. Women constitute half the country’s population, shoulder three-fourths of the responsibility to run society, yet get only one-fourth of the respect they deserve. This needs to be changed by focusing on the ‘4 Es’ – Educate, Employ, Empower and Enjoy.” Dr. Kumar added that adequate investments in family planning are essential for overall growth and development of the country.