New Devices for Hearing-Impaired and People with Motor Disabilities

Two devices, ‘Vibe’ for the hearing impaired and ‘iGest’ for persons with cerebral palsy, and other motor disabilities. 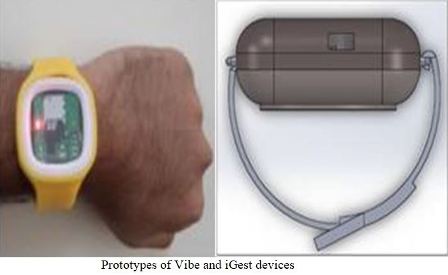 wearable devices that will assist people with hearing impairment and cerebral palsy, and other motor disabilities to communicate independently and enhance their quality of life.

Two major projects are being developed: ‘Vibe’ for the hearing impaired and ‘iGest’ for persons with cerebral palsy, and other motor disabilities. Both devices are embedded systems that will bring the latest developments from the Internet of Things and Machine Learning to wearable assistive devices. Such wearable devices will have rechargeable batteries and communicate with a mobile phone over Bluetooth.

`Vibe’ features a multitude of sound patterns that are recognized using a microphone and voice recognition modules. It will alert the hearing impaired about a specific sound such as a doorbell, alarm, or a crying child. It is wearable as a watch. It provides vibration input for the pre-identified surrounding sounds, with each such sound corresponding to a specific vibration and blinking LEDs to alert the user.

The devices are being developed by the Centre for Rehabilitation Engineering and Assistive Technology (CREATE), which is a multi-disciplinary translational research and educational initiative of IIT Madras. Sony Pictures Networks India (SPNI) is supporting the projects through its CSR initiatives.

Prof. Anil Prabhakar, Head, CREATE-IIT Madras, and Faculty, Department of Electrical Engineering, IIT Madras, said, “The focus is to keep the cost of the product low,  less than Rs. 5000/-. The advancements in technology and the advent and availability of low-cost microcontrollers and sensors are making it possible.”

Mr. Rajkumar Bidawatka, Compliance Officer and Head CSR, Sony Pictures Networks India, noted “Inclusivity is an essential aspect of the culture at Sony Pictures Networks India. We are proud to extend our support to IIT Madras for this project, which is an effort to ensure that the needs of differently-abled communities are addressed in the most convenient, affordable and accessible manner.”

As per the last census, 20 percent of the Indian population suffered from a motor disability. In the case of persons with cerebral palsy, limited motor control also manifests itself as a speech impairment and an inability to communicate independently. The overall incidence of cerebral palsy at birth is about 0.3 percent. They account for 15-20 percent of children with a physical disability. Likewise, in the case of the hearing impaired, currently due to the non-availability of affordable and sustainable assistive devices and systems, many are excluded from mainstream and inclusive education. (India Science Wire)