More than 140 number of sites inspected by the flying squads, actions against non-conforming units initiated.

Intensifying its actions in the battle against elevating levels of air pollution in Delhi-NCR, the 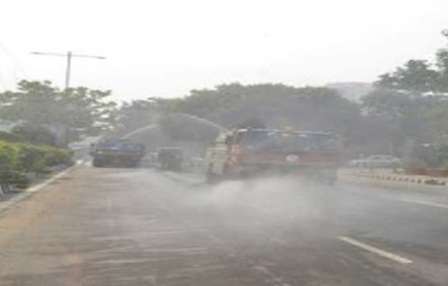 “Enforcement Task Force” (ETF) of the Commission for Air Quality Management in NCR and Adjoining Areas (CAQM) is daily holding exhaustive review meetings directly with the 40 inspection teams/ flying squads being constituted to inspect, continuously supervise and rigorously monitor enforcement and compliance of statutory directions issued by the Commission to improve the air quality of Delhi-NCR. These flying squads are widely covering every corner of the Delhi-NCR to track down violators and report their details to the Commission for stringent actions against them.

Following the directions of the Commission, 12 inspection teams each have been constituted for the NCR Districts of Uttar Pradesh, Haryana and National Capital Territory of Delhi, while 4 teams have been deputed in the NCR Districts of Rajasthan, to examine the units/ activities in various sectors (including Industrial, Transport/ Vehicular, Construction/ Demolition, Dust from Roads and Open Areas and other dispersed sources) contributing to rise in levels of air pollution.

Fastening its belts to scale down the air pollutants of Delhi-NCR, CAQM’s flying squads are leaving no stone unturned to bring into effect strict enforcement of the Commission’s statutory directions by continuously making surprise visits, intensive field level incognito checks at industrial units, C&D sites, commercial/ residential units, air pollution hotspots, etc. and reporting its details to the Commission on a daily basis.

CAQM’s Enforcement Task Force is holding a review meeting every day either physically or through virtual mode to take stock of the situation and assess the inspection reports of the day submitted by the flying squads to the Commission.

Violations and non-compliance of the directions issued by the Commission time to time as also towards related rules/ regulations are being viewed very seriously. The Enforcement Task Force in exercise of the powers conferred upon it under the Act is regularly passing preventive, closure or seizure order(s) to all such non-compliant units and other gross violators reported by the flying squads, which are over and above such other preventive, corrective and punitive actions as prescribed under the law.

Till 4th December 2021, more than 140 number of sites were inspected by the flying squads and based on the reports furnished by the flying squads, serious violations by various units are being identified for strict actions, including closure. Additionally, suitable actions against other non-conforming units is also been initiated by the Commission.

CAQM has also advised the respective implementing agencies including the State Government authorities, the Central Pollution Control Board (CPCB) and State Pollution Control Boards (SPCBs) to also continue to ensure compliance and strict implementation of the directions issued by the Commission and submit their daily action taken report to the Enforcement Task Force on a daily basis.

New Devices for Hearing-Impaired and People with Motor Disabilities