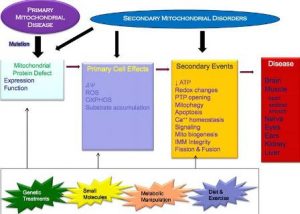 autosomal dominant progressive external ophthalmoplegia (adPEO), which is a widely prevalent mitochondrial disorder. Mitochondrial genetic disorders refer to a group of conditions that affect the mitochondria, the structures in the body cells that are responsible for making energy. People with these conditions can be of any age with almost any affected body system. However, the brain, muscles, heart, liver, nerves, eyes, ears and kidneys are the organs and tissues most commonly affected. Symptom severity can also vary widely.

On further study, the researchers found that Polymerase GammaA in 50% of the tested adPEO patients was highly ubiquitylated. However it was possible to reverse the process of ubiquitylation either by removing MITOL itself or by genetically modifying the site Polymerase GammaA in adPEO patients that gets highly ubiquitylated by MITOL. Speaking to India Science Wire, the leader of the team, Dr. Sagar Sengupta, said, “It will be interesting to test in future whether the reactivation of Polymerase Gamma A can actually be carried out in the patients using mitochondrial genome editing techniques”.

Businesses Should be Made Accountable: Parliamentarians on NAP-BHR