A year after India imposed its first national lockdown on March 25th, 2020, due to a global pandemic, pollution in Delhi is returning to its pre-Covid-19 levels. Commonly referred to as the pollution capital of India, the city is witnessing rise in levels of several pollutants such as PM10, PM2.5, NO2, and CO as March 2021 comes to a close. After the lockdown was imposed to prevent the spread of Coronavirus, pollution levels witnessed a giant drop across the country, due to a complete shutdown of every day activity, especially for the first 2 months. This was notable for Delhi as the Air Quality Index levels had treaded into the ‘hazardous’ category in early 2020. In January and February 2020, Delhi was reporting an AQI of 300+. According to the World Air Quality Project, any AQI beyond 300 leads to adverse health effects for the entire population living in the area. As of today, the AQI in Delhi stands at 177.

As the country went into the first phase of ‘Unlock’ in June and gradually resumed activities in different sectors, there was a surge in NO2 levels in the air. This was happening due to an increased amount of vehicles coming back onto roads and increase in combustion activities in factories, which are the primary emitters of Nitrogen Dioxide (NO). It is this very NO that combines with atmospheric oxygen particles and results in the creation of toxic NO2.

Also Read : Air Pollution sees over half of deaths in persons younger than 70, confirms ICMR

The Copernicus Sentinel-5p satellite of the European Space Agency maps global levels of NO2. It first hinted at the rise of NO2 in July 2020, but is now able to draw that levels of NO2 in the atmosphere are returning to what they were a year ago.

According to ESA, the NO2 levels over Delhi in February 2020, a month before the lockdown was imposed, fared in the red zone. It can roughly be calculated that they swung between 135-180 µmol m2. According to its data from March 2021, NO2 levels in the air seem to have increased, with a tilt towards the higher side of the scale.

However, a few days after the lockdown was imposed in March, NO2 levels dropped down to lesser than 45 µmol m2. The UN had also issued a statement saying that NO2 levels in the atmosphere in Delhi had dropped by 70 per cent due to the lockdown and ceasing of all activity. 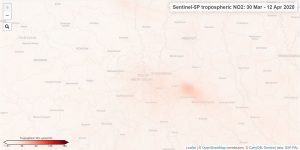 Carbon monoxide (CO), another major pollutant, has also risen to its pre-COVID levels. It is also emitted by vehicles and combustion activity, and large amounts of the gas can have critical effects on the heart and brain. CO levels in Delhi’s atmosphere also witnessed a drop after the lockdown was imposed, and as per Sentinel-5 data, can be calculated roughly between 83-106 ppbv. 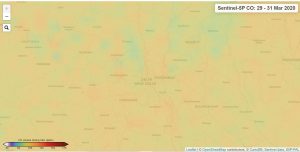 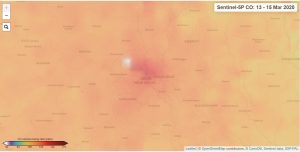 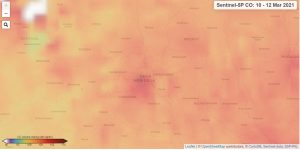