The new labour codes has set us on a backward route, as the state which is meant to be the arbitrator in favour of the powerless or the less powerful, seems to be doing the exact opposite.

Labour rights that we know today had been fought and achieved through the sweat and blood of workers over the centuries. With their struggle the situation changed from having a slave – master 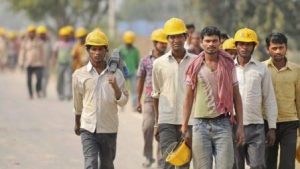 relationship to being an industrial worker and being paid to work. It was followed by the biggest fight to reduce the working hours. The globally accepted “eight-hour work” in a day has been the result of that struggle.

Workers are the most important components of production, as they are the only ones who drive any economy. Any goods that anyone consumes are essentially products of labour and interaction between labour and capital. Looking at centurial comparison, there had been huge gains that were achieved over a period of time in terms of labour rights. Then in the past decade there have been a decline in what has been achieved. The passage of three labour code bills by Parliament in 2020 —the Industrial Relations Code (IRC) Bill, the Code on Social Security (CSS) Bill and the Occupational Safety, Health and Working Conditions Code (OSHWCC) Bill seems to have shifted the scenario back in favour of capital and industries or in favour of the master than the worker. This also comes at a time when the entire country and its population is going through the pandemic and the new labour codes seem to take us back in history of the struggles of the workers.

Praxis, along with Partners in Change, organised a webinar to decode the new labour codes and their implications on worker rights. Akriti Bhatia, a PhD holder from Delhi School of Economics and the Founder of PAIGAM (People’s Association in Grassroots Action and Movements) talked about the Code on Social Security, Dr. Ashish Mittal, a medical, law and management graduate who has been working as Occupational Health Consultant for last 25 years, talked about the Occupational Safety, Health and Working Conditions Code and Dr Rahul Sapkal, an Assistant Professor at Centre for Labour Studies, School of Management and Labour Studies, Tata Institute of Social Sciences, Mumbai decoded the Industrial Relations Code.

Social security was being diluted through many populous schemes like Pradhan Mantri Shram Yogi MaanDhan Yojana, which were “highly inadequate and at the same time were short-term election-driven measures that didn’t have widest coverage and relief to workers who were in huge distress.”

Also Read : Migration: How to Minimise the Adverse Drivers?

There was also an ambiguity of language across the four codes which made it more of excluding in nature in terms of rights of the workers rather than being inclusive. The Employee Provident Fund (EPF), which was supposed to be universalized was made applicable only for enterprises, which had 20 or more workers and the Employee State Insurance (ESI) was made applicable for enterprises, which had 10 or more workers. Similarly, gratuity, maternity benefits, and compensation in cases of injuries also had shifting benchmarks and thresholds in which identification, estimation and assessment of coverage were made vague and difficult with misleading definitions and thresholds.

“One good thing about the codes is that they have mentioned gig economy workers or freelancers who do not have a proper employer and employee relationship. They have also included self-employed, home-based and wage workers as well, but there is no mention of agricultural workers, domestic workers, beedi workers and even scheme workers who have been fighting for social security for the longest time”, said Akriti. Additionally, there were clauses in the CSS that if one exceeds his/her work from 240 days as a worker then they will be eligible to opt for permanent jobs and different social security benefits from the employer, but just to evade that the employers had brought in fixed-term employment clauses through which they can stop their contract so that they don’t have to pay any social security. Also, there is no roadmap in terms of how the government would be utilizing the 30 crore that has been sanctioned for social security and how self-employed workers can benefit from these social security codes. “Although the ILO Convention mentions the components of the sickness benefit, unemployment benefit, old age benefit, employment injury, family benefit, maternity, invalidity and survivors benefit, India has not even ratified this Convention, and in its own social security legislation some of them have not been catered to at all and are very inadequately covered”, said Akriti.

Dr. Ashish gave a presentation on the Occupational Safety, Health and Working Conditions Code, which highlighted the major changes in the code. OSHWCC subsumed and replaced 13 labour laws relating to safety, health and working conditions. These laws included Factories Act 1948, Mines Act 1952, Dock Workers Act 1986, Contract Labour Act 1970 and Inter-State Migrant Workers Act 1979. “There was an intent for universal coverage, but when broken up into state boards then this aim of universality is defeated”, he said. The field inspection was also diluted as the inspection process was now supposed to be carried out with prior information. Apart from that it gave the establishment the convenience of self-reporting. “Making the inspector a facilitator can now increase industrial accidents as the employees who could have reported unsafe situations to the inspector now have no one to discuss their grievances with”, stated Ashish. 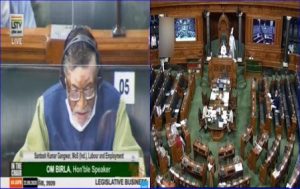 Another key change has been that appointment letter is made statutory even for employees who had worked for 10 days and as per the new provision the employers required consent of female employees for night shifts which shall be from 7pm till 6 am only and approved by the central or state governments. Apart from this for a regular contract labour the duty of the principal employer has been abolished. The employer of the placement agency was earlier held responsible for the health safety, but now it has ended their employee–employer relationship. The definition of “Inter State Migrant Worker” and definition of “worker” was also revised. It now included persons in supervisory capacity, working journalists and sales promotion employees who were drawing less than Rs 18,000 per month as salary.

The Industrial Relations Code (IRC), which is the backbone of entire labour laws, was decoded by Dr Rahul in his presentation. He shared that the existing set of labour laws should be broadly grouped into four to five groups of laws pertaining to industrial relations, wages, social security, safety and welfare and working conditions. It combines the Trade Unions Act, 1925, the Industrial Employment (Standing Orders) Act, 1946 and the Industrial Disputes Act (IDA), 1947.

The IDA required that industrial establishments employing 100 or more workers must secure prior permission from the appropriate government before effecting lay-off or retrenchment of workers and closing establishments, but as per the new IRC the threshold limit was increased to 300 for such establishments.

Because of this drastic change, 71 per cent of Indian manufacturing firms are now without standing orders (as per 2000–15 data of industries). This covered approximately 3.5 lakh companies, which employ19 crore people.

“If standing order is not applicable to those with less than 300 workers then workers will not have the right for grievance redressal”, Dr Rahul added.

The definition bracket of “industry” has also increased to include terms like “charitable”, “philanthropic”, “social”, etc. which are left undefined increasing the chances of misuse. It also expanded the definition to “strike” to include “the concerted casual leave on a given day by 50 per cent or more workers employed.”This made doing a strike almost impossible as prior notice of 14 days was made mandatory for strike and the validity of notice of strike was also increased from six weeks to 60 days.

The other limitation in the code was exclusion of migrant workers, sex workers and domestic service workers even after specific guidelines of National Human Rights Commission to include sex worker under the Code.“In India 41 per cent of the people are self-employed and if they are not included this will mean we miss a very big chunk of workers. Protection for ‘Fixed Term Employment (FTE)’ was also left ambiguous by not talking about automatic absorption”, Dr Rahul said.

Dr Subir Sinha, a political theorist teaching in the Department of Development Studies at SOAS, shared that “the separation of labour and making labour available to capital and at as low a cost has now become a part of the growth model of most developing countries.” “This is also taking place at the time of historical weakness of trade unions and of labour organisations. We should really think in terms of what the new organisations are doing and how that particular process can feed into the policy making processes”, he added. As a way forward he suggested an increase in the awareness among the workers regarding their rights and then moving on from there as without it the situation of a better legislation to be passed will be missed out on and so will be the prevention of misuse and manipulation of legislation to the advantage of working people. “A defeat of labour here will result in a further decade of reduction of rights rather than a defense or expansion of those rights”, said Dr Sinha.

Here is Why Star Formation Dwindles with Time