Migration: How to Minimise the Adverse Drivers?

The essential factors in minimising adverse drivers of migration range from structural drivers and micro factors to engaging with the very notion of migration by choice.

Migration determinants are often understood econometrically and placed under the push–pull and gravity models. The factors, which compel people to leave their place of origin, or the ‘drivers of migration’ are 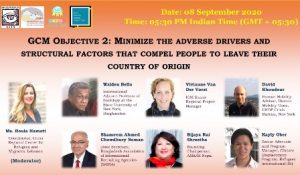 complex. They need to be contextualised in terms of macro, meso and micro factors, which act together and result in migration.

Prof. Walden Bello, Adjunct Professor of Sociology, State University of New York, Binghamton, pointed out the internal structural drivers of the export of labour by focusing on two countries – the Philippines and Mexico. He claimed that the role of these countries as labour exporters cannot be disassociated from the dynamics of neo-liberal capitalism. The ballooning of the labour migration owes much to the devastation of the economy and jobs by structural adjustment policies imposed by the World Bank and the International Monetary Fund (IMF) beginning in 1980s, the trade liberalisation under the World Trade Organisation (WTO) and prioritisation of debt repayment by the Philippines’ Marcos governments in national economic policy since 1986.

Prof. Bello was speaking at the webinar on ‘GCM Objective 2: Minimize the Adverse Drivers and Structural Factors that Compel People to Leave their Country of Origin’, which was jointly organised by the Migrant Forum in Asia (MFA), Philippines, Cross-Regional Centre for Refugees and Migrants (CRRM), Lebanon, the Global Forum on Diaspora and Transnationalism (GRFDT), India and Civil Society Action Committee (CSAC).

According to Prof Bello, the structural adjustment resulted in deindustrialisation, loss of manufacturing jobs, and trade liberalisation, which pushed peasants out of agriculture. Structural adjustment alone is not be blamed as the already existing factors of inequality and population pressure were crucial. However, ‘structural adjustment interacted with other variables to create a vicious cycle that draws people to seek work elsewhere.’ He drew attention to two important aspects – Firstly, labour export has served as an economic safety valve, absorbing surplus labour created by neoliberal policies in dependent capitalist countries like Mexico and the Philippines. Secondly, labour export as a political safety valve, channelling outwards energies that would otherwise have been a source of progressive change.

The orthodox theories of drivers of migration look at economic opportunities and involuntary migration, but there is a need to look at the social, cultural aspects, as well as the role of social media.

“It is important to understand that the general overall migrant triggers are similar but to understand its complexities, one needs to look into the geographies and the actual emotional value, social relations and obligations that migrants have and the social networks.” Vivianne also claimed that “we often underestimate displacement and previous migration experience.” She pointed out that if we look at the migration from Nigeria, Iraq and Afghanistan, the small triggers are different. Vivianne moved away from the classical understanding of migration to a more nuanced understanding by focusing on micro-level analysis.

Poverty, domestic violence and unemployment are drivers of migration, said Bijaya Rai Shrestha, Founding Chairperson, AMKAS Nepal. Government has the responsibility in minimising the adverse drivers of migration. She gave the example of migration ban on women imposed by the Government of Nepal, such as age ban, total ban all of which restricts movement of women. Such restriction only further aggravates the problems as women are not able to go through legal channel, and the possibility of them being trafficked is most likely to be increased. In this scenario the onus is on the government to address the concerns regarding migration of women. 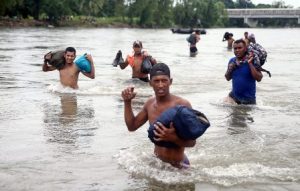 Shameem Ahmed, Secretary General, Bangladesh Association of International Recruiting Agencies (BAIRA), shared overpopulation, non-availability of jobs as factors which lead people to move for financial benefits. He discussed how the expenditure of migration often becomes a burden on the employee. Shameem Ahmed urged that the government create database system for aspirant migrant to register so that expenditures such as employment fees go through the bank and ease difficulties.

This webinar also addressed important issues of climate change and gender. Kayly Ober, Senior Advocate and Programme Manager, Refugees International, discussed how climate change as an important driver of migration. David Khoudour pointed to the need of disaggregating the drivers of migration by sex. Several studies have shown that women in developing countries migrate for additional reasons than men. Discriminatory social norms have a strong impact on women’s decision to migrate. He suggested that one way to make women migrate by choice and not by force is precisely to reduce inequality and to have social norms and institutions which are less discriminatory.

The webinar raised important questions of deconstructing ‘choice’ in migration. Prof Bello argued that choice is conditioned by one’s context.

Also Read : COVID-19 and High-Skilled Migration in the Health Sector

If one’s context is tremendous poverty then it is understandable why people migrate. Shabari Nair, Labour Migration Specialist for South Asia, ILO Decent Work Technical Support Team, New Delhi, shared that when we talk about choice, we need to see aspiration as an important driver of migration. Prof Binod Khadria urged the need to address counterintuitive. This panel discussion brought to fore the essential factors in minimising adverse drivers of migration ranging from structural drivers, micro factors to engaging with the very notion of migration by choice.

The webinar was the second in a series on 23 webinars focusing on the objectives of Global Compact for Safe, Orderly and Regular Migration (GCM), which was adopted in 2018 in Marrakesh, Morocco. Roula Hamati, Coordinator of Cross-Regional Centre for Refugees and Migrants, moderated the session posing questions on migration out of necessity as against migration by choice.

Serving Some Summer-y Scoops of Love