3 new bills were introduced in LS, while 1 bill was passed in RS on the 15th day of Parliament budget session 2021.

The Government of National Capital Territory of Delhi (Amendment) Bill, 2021 was introduced in the Lok Sabha, along with The Mines and Minerals (Development and Regulation) Amendment Bill, 2021, and The 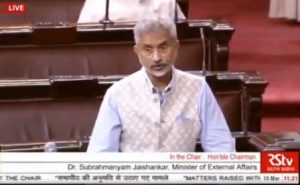 Juvenile Justice (Care and Protection of Children) Amendment Bill, 2021. In the Rajya Sabha, The National Institutes of Food Technology, Entrepreneurship and Management Bill, 2019, were passed with voice vote. Members in both houses also held discussions on the Railways Ministry and the Jal Shakti Ministry. Minister of External Affairs S Jaishankar also made a statement on the impact of COVID-19 on Indians residing abroad, and provided data on repatriations carried out during the pandemic year, which brought back close to 45 lakh citizens through the Vande Bharat missions.

Introduction of the NCT Delhi Bill in Lok Sabha also made buzz among leading politicians, especially Aam Aadmi Party leader and Delhi CM Arvind Kejriwal. Introduced by MoS for Home Affairs G Kishan Reddy, the bill aims to define the role and powers of the Lieutenant Governor of Delhi. As per the proposed amendments mentioned in the bill, it seeks to amend Section 21 of the Government of National Capital Territory of Delhi Act, 1991, and insert the following: The expression “Government” referred to in any law to be made by the Legislative Assembly shall mean the Lieutenant Governor.’

According to the statement of purpose, “In order to give effect to the interpretation made by Hon’ble Supreme Court in the aforesaid judgments, a Bill, namely, the Government of National Capital Territory of Delhi (Amendment) Bill, 2021 seeks, inter alia, to clarify the expression “Government”, which in the context of legislations to be passed by the Legislative Assembly of Delhi, shall mean the Lieutenant Governor of the National Capital Territory of Delhi, consistent with the status of Delhi as a Union territory to address the ambiguities in the interpretation of the legislative provisions.”

Mr. Kejriwal called the bill undemocratic and tweeted, “After being rejected by people of Del (8 seats in Assembly, 0 in MCD bypolls), BJP seeks to drastically curtail powers of elected government through a Bill in Lok Sabha today. Bill is contrary to Constitution Bench judgment. We strongly condemn BJP’s unconstitutional n anti-democracy move.”

Two other bills were also introduced in the Lok Sabha, including The Marine Aids to Navigation Bill 2021 and The National Institute of Pharmaceutical Education and Research (Amendment) Bill, 2021. The NIFTEM bill, as passed in the Rajya Sabha, aims to convert two educational institutes (in Haryana and Tamil Nadu) into Institutes of National Importance, and to provide for instructions and research in food technology, entrepreneurship and management. It also grants financial autonomy to both educational institutes to allow scope for research.

In the LS question hour, Minister for Human Resources and Development, Ramesh Pokhriyal ‘Nishank’, said that 27 lakh teachers were being trained on the basis of the New Education Policy. While discussing the disinvestment scheme for Life Insurance Corporation of India, MoS for Finance Anurag Singh Thakur argued that the process of disinvestment would benefit both the policyholders of LIC, as well as the company itself, by raising its price in the market post IPO. He also mentioned that the government is currently in the process of getting the company valuated.

YSRCP’s Midhun Reddy questioned about the taxes on diesel and petrol, to which Mr. Thakur responded, “The price of diesel and petrol is high because of both central and state taxes. In order to bring down the price, petrol can be brought under GST, which is an option we had kept open at the time of introduction of the GST bill.” He also said that if the state governments have no problem in taking it to the GST council (where discussions can be held to take petrol under purview of GST), then the center is also willing to discuss the same.

During the RS question hour, Minister for Environment, Forest, and Climate Change, Prakash Javadekar responded to a query about afforestation by saying that 48,000 crore has been provided to state governments to ensure a 33 per cent green cover.

Minister for Sports Kiren Rijiju answered questions about encouraging sports in Jammu and Kashmir. He said, “They have potential in football, and we will be launching more programs for that. National Olympic Camp will also be held in Gulmarg, Kashmir, from now on. We will also promote water sports.”

During the discussion on Jal Shakti Ministry in RS, YSRCP’s Subhash Chandra Bose, whilst requesting central government support for his government in Andhra Pradesh, said that the budget for the ministry was hiked by 64 per cent in 2021-22 to ensure government’s target to provide tap water to every household by 2024. RJD’s Manoj Kumar Jha, commenting on a recent incident where a young Muslim boy was allegedly beaten up in Ghaziabad for attempting to drink water from a temple, said, “Now we know that water has a religion too.” He further added, “A majority of patients in Kosi and Seemanchal hospitals suffer from water borne diseases. The cleaning process of Ganga River has also not moved beyond hollow rhetoric.”

Several ministers in the LS also put forth demands for their constituency for the Railway sector under the Union Budget 2021-22.