The Parliament approved a Bill to amend the law to abolish NDP till Class 8 by enabling state governments to allow schools to fail students even as the Economic Survey 2015-16 revealed that only about 42 per cent of students in class 5 (in government schools) can read a class 2 text. 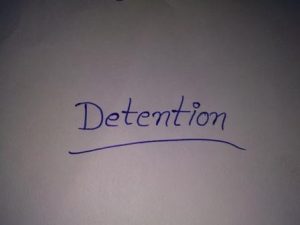 Many contend that the rationale for the NDP or automatic promotion to the next class is minimising dropouts, making learning joyful, and removing the fear of failure in exams. However, there have been countless debates over whether the No Detention Policy is beneficial or not.

Free and compulsory education of children in the age group of 6-14 years in India became a fundamental right when, in 2002, Article 21-A was inserted in the 86th Amendment of the Constitution. This enabled them to seek free and compulsory elementary education in a neighbourhood school at the primary (classes 1-5) and upper primary (classes 6-8) levels.

Many believe that schools these days have become mere centers for the mid-day meal scheme, as education and learning are minimal. The Economic Survey 2015-16 revealed that only about 42 per cent of students in class 5 (in government schools) can read a class 2 text.

The National Achievement Survey (2015) also revealed that performance of students, on an average, had gone down from the previous round of the Survey conducted in 2014. It is also felt that the said children often did not study and worked hard if there is an automatic promotion to the next class. The survey highlighted how the education system is not prepared to support the Policy as Continuous and Comprehensive Evaluation (CCE) has not been properly implemented and inadequate emphasis has been given on teacher training which also negatively affects the accountability of the teachers towards learning of the children.

“In 2015, all the states were asked to share their views on NDP and most of the states suggested modifications to the Policy in its current form.”

While RTE and NDP have led to 100 per cent enrolment at the primary level, it has also been observed that there are higher dropouts at the secondary education level, with the highest dropout rate being 17 per cent at the class 10 level. The TSR Subramanian Committee on Education had recommended that the NDP in schools should be applicable only till Class 5. The Vasudev Devnani Committee had also suggested for its revocation.

When the Parliament approved a Bill to amend the law to abolish NDP till Class 8 by enabling state governments to allow schools to fail students, the amendment spurred the debate once again as many are of the view that the said policy is for the betterment of the country’s low literacy rate.

They believe that assessments in CCE were used for learning where the child is struggling and taking remedial measures so that there is no need for detaining the child. Moreover, the reasons for rise in dropouts at the secondary level may include domestic activities for girls and economic activities for boys because of financial constraints and lack of interest in education. Therefore, they contend that NDP may not have been responsible for such a high dropout rate at all.

Advocate Ashok Agarwal firmly stated, “Those who believe that RTE Act Amendment literally dropping No Detention Clause would result in improving the quality of education in schools, in my humble submission, simply live in a fool’s paradise.”

Instead of pondering over NDP, effort should be made to improve the quality of education which can lead to all round development of children and equip them with life skills.

Instead of rote learning, priority should be given to development of their social attitude, creativity, emotional intelligence, character building and perseverance.

The writer is a law student at Jindal Global law School. She can be reached on twitter @AparimitaJ

Jaipur Lit Fest is back with a science focus

Being a refugee is definitely the harshest experience: Ubais Sainulabdeen