In view of the prevailing pandemic situation arising out of Omicron variant, Shri Sunil Barthwal, 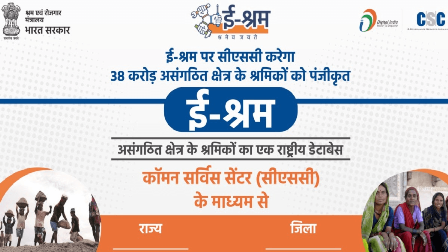 Secretary, Ministry of Labour & Employment chaired a Co-ordination Meeting with States/UTs on 12.01.2022 through video conferencing, to take stock of the preparedness of the States/ UTs in respect of workers in general & Migrant Workers in particular. Additional Chief Secretaries, Principal Secretaries, Secretaries of State Labour Departments and Labour Commissioners of all the States/UTs and officers of Ministry of Railway and Department of Food and Public Distribution participated in the meeting.

State Governments informed that barring night curfews and weekend curfews at few places in some States/UTs where the number of Covid cases is rising, there were no restrictions on construction activities, business activities, running of shops and industrial activities in the country. So far, there is no report of unusual movement of migrant workers at present owing to the limited restrictions imposed by the Governments. Some media reports of mass exodus regarding movement of migrant workers to their home States were found to be untrue and it was also noticed that such reporting was based on old photographs. As on the day of review, the business situation is normal throughout the country except 50% restrictions on workforce at some places.

The Central as well as the State governments are keeping a close watch on the situation and fully ready and prepared to tackle the situation as per demand of the situation. Some State Governments have already made plans for distributing dry rations to the needy labourers, if required. Some have made preparations to provide financial assistance from the Building and Other Construction Workers (BOCW) cess fund and Social Security fund available with the States. Railways is also keeping a very close watch on the situation particularly at the major railway stations like Mumbai, Delhi, Chennai, Kolkata, Bangalore and Secundrabad etc. and ready to provide special trains in case the situation demands. All the States/UTs have been advised to keep a close liaison with the local Railway Authorities.

State Labour Commissioners confirmed that the functioning at construction sites, factories and establishment has remained undisrupted and there is no exodus of workers, especially migrant workers, back to their home states.

The State Governments are keeping a close watch to look after the interests of the migrant workers and are fully ready to provide all assistance to prevent any hardships to the workers. Both the labour supplying states and the labour receiving States were advised by the Secretary to work in close coordination to tackle any migrant workers’ situation if need arises.

It was also pointed out by Secretary, that over 21 crore unorganised workers have registered themselves on e-Shram Portal. All the State/UT Governments were requested to put in place a mechanism to maintain a record of the migrant workers and register all the remaining workers who have not registered themselves on the e-Shram Portal as yet. This will facilitate the State Governments to plan and deliver financial and other benefits to them at appropriate time.

Twenty one Monitoring Centers have been activated across the country by Office of Chief Labour Commissioner (Central). Toll free helplines have been opened by the States. Director of the Department of Food and Public Distribution informed that there is no unusual spurt seen under One Nation One Ration Card as far as ration pick up is concerned. The States/ UTs were also requested to maintain records of returnee migrant workers, if any. The States have also been asked to be wary of rumour mongering on exodus and take quick steps to counter such rumours. They were advised to reassure migrant workers regarding their safety, security and livelihood.

Sri Aurobindo: Future Revealed in the Past