No Power show for Independents in Karnataka Assembly

The outcome of Karnataka Assembly elections makes one thing clear and loud- One does not stand a chance without backings from national political parties. 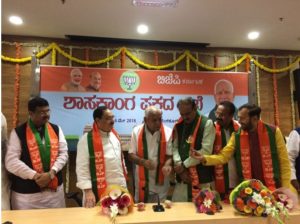 sn’t that evident? They have elected 38 candidates of Janata Dal (Secular), one of the biggest regional parties in Karnataka. Except, one independent contested from Karnataka Pragnavantha Janatha Party and the other candidate fielded by Bahujan Samaj Party (BSP) and supported by the JD(S), none of the independent candidates and those fought on behalf other political parties, which hog the headlines only during the elections, has succeeded in retaining the deposit amount. The number of Independents has come down to one in 2018 from nine in 2013.

The results of Karnataka Assembly elections are a total disappointment for Aam Aadmi Party (AAP) which tried its best to open an account, but in vain. The AAP fielded candidates in 28 Assembly constituencies, but none of them has succeeded in getting more than 3,000 votes. While its candidate Renuka Vishwanathan, a former IAS officer, got 2,658 votes in Shantinagar constituency in Bengaluru, its Karnataka convener Prithvi Reddy who contested from Sarvagna Nagar where Congress fielded K J George got only 1,861 votes. The number of NOTA votes in Sarvagna Nagar was 2405. Mohan Dasari, who contested on the AAP ticket from C V Raman Nagar, polled only 1,926 while the number of votes polled under NOTA was 2,259.

The other political party that hogged the limelight is All India Mahila Empowerment Party (AIMEP) founded by Dr Nowhera  Shaik. It may not be an exaggeration to say that AIMEP is the only political party that printed maximum number of posters of its president. The producer of Kannada film Mukyamantri Kalihodrappo (meaning Chief Minister is missing in Kannada) wanted to complain against the AIMEP for pasting its poster on his film posters. Though the AIMEP fielded candidates in more than 100 constituencies, none of the candidates were able to poll more than 1,000 votes in the Assembly elections.

“I was aware of contesting against the candidates with resources and manpower. My aim was to create awareness among the voters. Though I failed to make to the Assembly, I will continue to work for the people of C V Raman Nagar constituency,’’ said Mohan Dasari, a software engineer who took three months leave to contest in the Assembly elections.

Swaraj India had also made all out efforts to retain its lone seat (Melukote) in the Assembly, but failed. It fielded Darshan Puttannaiah, the son of late Puttannaiah who represented Melukote in the Assembly.  Darshan was supported by Yogendra Yadav and Devanuru Mahadeva, a well-known Dalit writer, but failed to win from Melukote. Swaraj India candidates failed to garner votes in other constituencies. Its candidate Linge Gowda S H got only 450 votes from Maddur constituency. Its other candidate P Ramesh Chander got 1184 votes in Mahadevapura constituency reserved for SC candidates.

Bahujan Samaj Party (BSP), in association with JD(S), had contested from 18 constituencies. Its candidate N Mahesh won from Kollegal by polling 71,792 votes as against his nearest rival A R Krishnamurthy of Congress who got 52,338 votes while BJP candidate G N Nanjunda Swamy got 39,690 votes.  In other constituencies the BSP candidates have succeeded in garnering only a few thousands votes.

Karnataka Pragnavantha  Janatha Party has also fielded candidates in around 20 constituencies. It caught the limelight by bagging Ranibennur. Its candidate R Shanker defeated Congress stalwart (Speaker of Karnataka Assembly) K Koliwad by a margin of 4,338 votes. Its candidates failed to retain the deposit amount in other constituencies. For example, its candidate Irshad Ahmed Khan got 323 votes as against the NOTA votes of 2405 while Congress candidate K J George got 109955 votes.

The Moment When It Came

Should fuel prices be brought under GST?