New Delhi: Since the time it gained power in 2014, the BJP has always wooed for a transparent government system for its citizens to trust and actively engage in public discourse. Prime Minister Modi himself has been highlighting the need for more transparency and accountability across all public institutions, reiterating his idea of a pro-public government. With the commencement of the Modi government’s final Budget session before the 2019 Lok Sabha elections, it is significant to evaluate India’s budget transparency.

The Open Budget Survey (OBS) of 2017 released by the International Budget Partnership (IBP) on 31 January, 2018 in Washington, DC found that 89 out of 115 countries which were surveyed fail to make sufficient budget information publicly available. In its sixth round of biennial assessment since 2006, the OBS 2017 shows a decline in average global budget transparency scores from 45 in 2015 to 43 in 2017. However, India’s scores have moderately increased from 46 in 2015 to 48 in 2017, slightly higher than the global average of 42 out of a score of 100.

“Interestingly, among the south Asian countries, India falls behind
Nepal (52) and Afghanistan (49) in budget transparency”

In the survey’s comparative assessment of the three pillars of public budget accountability: transparency, oversight and public participation, India scored the least in public participation in budgetary process with a score of 15 out of 100, higher than the global average of 12, indicating very few opportunities for public to engage in budget related affairs. Warren Krafchik, Executive Director of International Budget Partnership (IBP) indicates this failure of most governments to involve the public in decision making or to explain their plans and budgets weakens trust and undermines democracy. 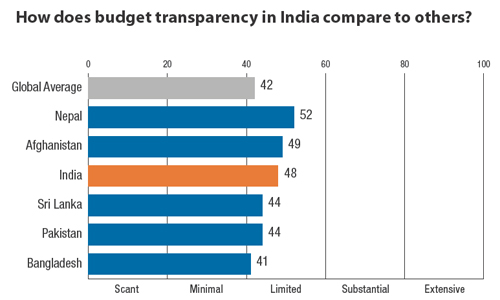 Commenting on India’s score in the OBS 2017, Subrat Das, Executive Director Centre for Budget and Governance Accountability (CBGA) said, “India has scored well above other countries in terms of publishing timely and relevant information in Audit Reports and In-Year Reports. Not publishing a Pre-Budget Statement and a Mid-Year Review in 2016 lowered India’s score. However, had the OBS been carried out for the financial year 2017-18, India’s score would have been higher; as the advancing of presentation of Union Budget by a month last year made the earlier practice of Vote on Account redundant and the full Budget gets enacted before the start of the new financial year since 2017-18.” 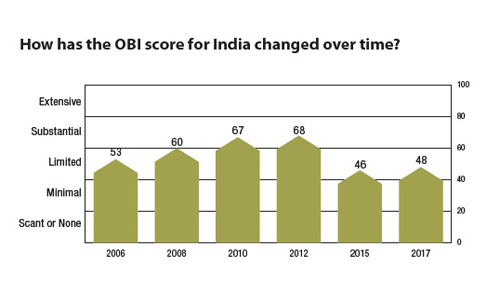 Interestingly, among the south Asian countries, India falls behind Nepal (52) and Afghanistan (49) in budget transparency. Compared with India’s score in the previous years, it must be noted that its Open Budget Index score has fell from being substantial (68) in 2012 to limited (48) in 2017 recording a sharp drop in budget transparency. This data stands contrary to the present government’s aim for transparent and accountable institutions and the need for it to reflect on its policies and mechanisms for an all-inclusive democracy. 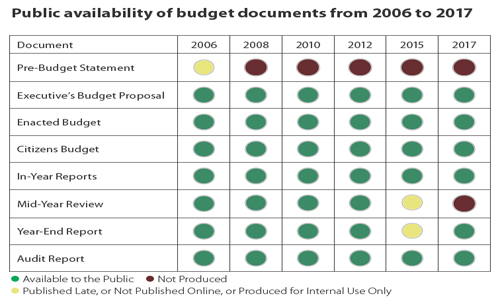 Laying stress on the importance of more open budgetary systems across countries, Ravi Duggal, Country Coordinator and Senior Program Officer, IBP said, “Budgets reflect the real politics within the governance process and its transparency, accountability (oversight) and public participation would only strengthen democracy and reduce inequalities. Thus, to strengthen this all countries should endeavour to publish all eight key budget documents and make them available in public domain, strengthen oversight institutions and especially the legislatures and expand the scope of public participation in the budget process.”

As many governments around the world are making less information available related to raising and spending public money, it directly points at the declining public trust in government and increasing inequality. A detailed OBS report on the India specific Budget Transparency can be found here.

The problem of Tuberculosis in India