With more than 63,000 deaths, it comes as no surprise that Maharashtra’s Shiv Sena - Congress - NCP Maha Vikas Aghadi (MVA) coalition government has failed to keep the virus in check.

The highest single-day tally of 24,619 in 2020, Maharashtra’s second wave has proved to be more contagious, causing 60,000+ new cases for two weeks straight. 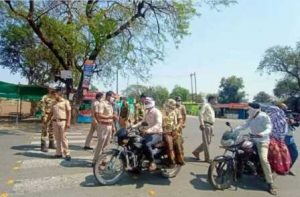 With a daily reporting of 60,000 plus cases on average since the last two weeks, Maharashtra has been labeled as the worst-hit state by COVID-19 in the country. Until March, Maharashtra alone was contributing 60% of India’s coronavirus cases. The reason why it now contributes only 20% is not because of a decline in the number of cases but a rapid increase in cases in states like Delhi, Kerala, Uttar Pradesh, Karnataka, and Chhattisgarh. Since the start of the infectious second wave, the cases in the state have increased drastically. From 1st April the number of cases recorded was 40,000 which moved to 60,000 daily. The Union Ministry of Health and Family Welfare had red-flagged Maharashtra as the top contributor of cases in the country. The five hotspots in the state are the following five places (data till 24th April) –

The transmission rate, that is the number of people an infected person can infect, was 1.34 in March. In the last week, the value is below 1 for Mumbai. Meaning every 100 infected people could infect less than 100 people. This decline would severely help in flattening the curve.

Like Mumbai, Pune, the second-worst affected city in India, too is showing signs of decline. Its highest number of cases were recorded on 17th April with 12,825 new cases.

Blunders by the State

With more than 63 thousand deaths, it comes as no surprise that Maharashtra’s Shiv Sena – Congress – NCP Maha Vikas Aghadi  (MVA) coalition government has failed in keeping the rise of cases in check. This government could not get its resources, machinery, and manpower together to avoid a deadly second wave. Ravi Duggal, a health economist says, “Every expert knew the second wave was coming. But nothing was done to boost our primary healthcare system.”

After November 2020, Maharashtra along with India had seen a decline in cases. This is the same period where many European countries and the USA were going through the second wave. The government should have used this period of lull to increase medical infrastructure but they didn’t. A senior doctor from the state health department mentioned to TOI, “we did nothing in the lull of three-and-half months to prepare. This has been our only failure.”

The state of Maharashtra has the lowest per capita expenditure on public health. It spends Rs 1400 per person in the state. To put it into perspective states like Sikkim and Himachal Pradesh, for instance, spend 3 to 4 times more. The Central government has spent Rs. 8500 per person in the country. Along with spending, the government has left more than 70% of places vacant meant for specialized doctors in the state, especially in the rural areas.

Blaze in Bhandup and Virar

A fire broke out at Dreams mall on 25th March in Bhandup. On its third floor was a Covid-designated hospital named Sunrise Hospital. It resulted in the death of ten patients. The Mumbai Fire Brigade had in October 2019 conducted a drill that found that the building’s fire alarm and smoke detector were not functioning. It also signaled that the place had no alternative electric supply nor healthy pipelines. Before transforming the mall area into Covid hospital, a mandatory upgrade should have been provided.

A similar fire had broken down in Vijay Vallabh hospital in Virar, 70 KM north of Mumbai. Though the reason for the blaze is unclear and under probe, the hospital’s Chief Administrative Officer mentions the reason to be a faulty AC. After a complaint from the patient on a non-functioning AC, the hospital repaired it by a technician. Days later, a short circuit in the AC is believed to have triggered a blast in the hospital’s oxygen supply. Out of the 85 patients present during the incident, 14 are believed to have died.

Also Read : BJP can wish to break the alliance, but MVA will remain committed to the people of Maharashtra: Vandana Chavan, MP

Occurred two days prior the Virar accident, an oxygen tank leaked in Zakir Hussain Municipal Hospital killed 24 patients. All 24 patients were dependent on ventilators for oxygen and the leak caused them their lives. A further 150 patients were reported needing oxygen. Visuals from the hospital show the gas leaking directly from the tanker outside the hospital creating white dense fumes. Later, fire trucks came to stop its spread.

For the above three incidents, the Maharashtra government has asked the Director-General of Police to launch an inquiry on the situation. Further, all hospitals will be required to have a fire audit and oxygen audit, to make sure such incidents don’t repeat. The DGP Sanjay Pande is also asked to look at the conspiracy angle in these incidents. Instead of looking at the conspiracy angle, the government should hold accountable the people whose negligence resulted in the death of 55 people in all three incidents combined.

A Glimmer of Hope

The second wave in Maharashtra was unfortunately more contagious and deadly. The highest single-day tally in 2020 (first wave) was 24,619 and in the second wave, the count is 60,000+ cases for two weeks straight. But many experts believe that the cases have reached stability and soon the peak would reverse into less number of cases. Scientists are banking on Maharashtra to be the first Indian state that will see a bend or drop in the curve.

Further, the government has announced vaccines to be available to people above 18 years of age from 1st May. Maharashtra’s minister, Nawab Malik, has also promised free vaccines to all its citizens. Maharashtra has also added itself to the list of states which promise free vaccines; namely, Madhya Pradesh, Jammu and Kashmir, Kerala, Chhattisgarh, Bihar, Jharkhand, Uttar Pradesh, Assam, Sikkim, West Bengal, Tamil Nadu, Andhra Pradesh, Telangana, and Haryana.

Transnational Cooperation of NHRIs Is Essential for Business and Human Rights