‘Divyanayan’ – a reading machine for visually impaired or illiterate person where any printed or digital document can be accessed in the form of speech output.

Nearly 4.7 million people in India are blind or visually impaired, this physical disability keeps them away from many things one of which is, reading. To make them self-dependant when it comes to reading Central Scientific Instruments Organisation, (CSIO) Chandigarh has developed a scanner based reading device called ‘Divyanayan.

It is a reading machine for visually impaired or illiterate person where any printed or digital document can be accessed in the form of speech output. The device uses a contact line scanner for acquiring the image of a printed document. “Earlier we were thinking to make it a camera based device but then it would have been difficult for a visually impaired person to click a perfect picture, so we thought of a scanner based device which is more viable” said Dr RK Sinha, Director, CSIO.

Depending upon the size and content this personalized portable device can scan and read approximately fifty pages.

The user has to manually scan the document by placing the device on printed document without knowing the direction of text flow, moving the device over the document to be read. It has two keypads one is used for the operations and another is keypads which are there for cloud connectivity, saving a file name, use of pen drive and other such operations. 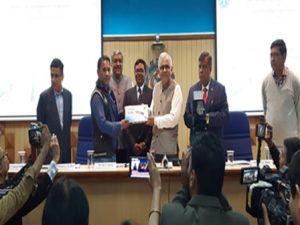 It uses optical character recognition technique to convert the image into text and a text to speech converter further converts the text into audio. Audio files are organized in the machine and can be listened back whenever the user wants to listen it. The device is standalone, portable, completely wireless and internet enabled. “It is available in seven Indian regional languages and soon we will increase it to 10-12 languages. It uses Indian accent for all its languages. The speech rate can be increased according to the need of the user” told Dr Sinha. It is equipped with user inter-faces such as internal speaker, rechargeable battery, USB, headphones, SD card, Wi-Fi and blue tooth.

Recently, technology transfer of Divyanayan has been done to Central Electronic Limited (CEL). “By the end of March we would make 100 pieces and within 2-3 months it would be there in the market” said BR Sarkar, Director, CEL.

With Divyanayan, Council of Scientific and Industrial Research- National Aerospace Laboratories (CSIR_NAL) has also transferred technology of Drishti tansmissometer to CEL. It is visibility measuring system, useful for safe airport operations and gives information to pilots on the visibility at run way. “Till date we have fabricated 104 such systems and provided successful operation at various airports Out of 104transmissometers50 have been installed at civil airports and 54 at military airports “said Dr Jitendra J Jadhav, Director, NAL. Indira Gandhi International Airport, New Delhi has 13 Drishti systems in all its 3 runways. It is capable of handling both low and high visibility accurately.  (India Science Wire)

Housing and Smart Cities: Why a ‘Steel Transition’ is Required?