Taking a leap of ‘Vision’

A team of three students have developed a wearable device for the blind and visually impaired based on Artificial Intelligence and machine learning. 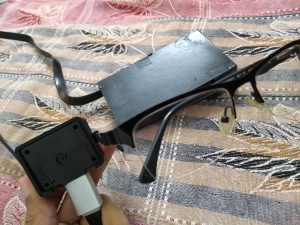 T ime and again, we talk about the power of Artificial Intelligence (AI) and how the technology can help many. Not to discredit the growing instances of the multifarious advantages of AI for empowering the ones who really need it.

That and personal experiences witnessed by 20-year-old Achintya Kumar, currently pursuing CSE Major from University of Massachusetts (UMass), made him and his team develop a non-invasive wearable device that acts as a virtual assistant for the blind and visually impaired.

“By mapping the environment and communicating the objects nearby, the device, ‘Darsana’ which is built upon a convolutional neural network, is able to learn and teach itself while reading texts, identifying objects and constantly updating the user,” spells out Achintya to Delhi Post, describing that Darsana, which takes its name from Sanskrit meaning sight, gets faster and more accurate with prolonged use.

Alongside the head mount attached to the spectacles of the person, a camera, a microphone and a wire run down to the user’s pocket where the CPU and battery are placed. In the pocket case (rectangular black box), there’s a CPU and a battery, along with some wires running to power the device. The head mount can be attached to most spectacles, and can be customised according to the user’s spectacles too.
“I had the idea for Darsana for quite some time, and one day Rohan came to me talking about some entrepreneurship contest at the business school at UMass, Amherst, and he knew I was into entrepreneurship so he wanted to partner up for a venture. That’s how we got started with it in January 2018,” recalls Achintya, talking about his friend and team member 20-year-old Rohan Teja, who looks at the business side of the venture.

Another member of the team, 19-year-old Dhruv Khurana who headed the development of the device further tells Delhi Post, “AI is what made it possible. The essence of AI is creating computer programs and systems that can perform tasks which normally would require human intelligence. We loved studying new research in this field and it got us asking: how could we use AI to enhance human lives?”

The hardware has a neural network built-in which can process images hundred times faster than usual midrange CPUs. “We are constantly improving the time-to-run and accuracy of the software. We are currently doing this by removing the parts of our computer’s system that are not needed for our software and also by using AI toolkits such as the OpenVINO toolkit created by Intel to accelerate AI applications,” points out Dhruv, who is from Seattle, Washington.

To add to that, they are also looking into making the device lighter, more comfortable and cheaper. “Along with working on increasing the speed and accuracy of the device, we are also adding functionality like maps navigation and Google Assistant side by side. We also have plans to further expand our horizons with a couple of more novel concepts that will go with the device to make it an all-round assistant,” informs Achintya.

“The team has mentors in the form of engineers, doctors and researchers, and also has the support of Perkins School for the Blind, which is known to be the oldest school for the blind in United States.”

While they await the launch of the device commercially, talking about the challenges that they faced and are facing, the team says that apart from the technical ones, making the device cost-efficient is a prominent one. “There are also some legal challenges that we need to sort out before this device can be sold commercially. Also, we had a hard time finding help. Since this device addresses such a small portion of the population, the importance of this device is not usually realised by the normal public,” says Achintya.

Recently, the team won Idea Jams contest at UMass and were finalists in the Innovation Challenge. “Apart from the couple of competitions that we’ve won, we have gotten several good reviews from doctors and engineers working in the disability space as well as several visually impaired persons across the world where some of them described it as the perfect solution,” says Achintya.

“Sharing that their vision for Darsana is to make an organisation that works in the disability space to engineer solutions for all disabilities, the team plans to partner with rehabilitation centers and blind schools to provide maintenance as well as direct sales of these devices.”

“We have had interest from a few hospitals for the same, but we’re still holding out until our device is ready to reach the consumer,” says Achintya.

India’s transformation is rapid: VP Naidu to Indian diaspora in US