Plight of Women in Afghanistan

Afghan women are facing the systematic oppression under Islamic fanaticism. On August 15, 2021, Taliban, 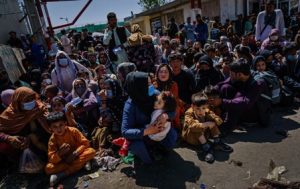 who are former Afghan resistance fighters, also known as mujahedeen, fought the invading soviet forces in the 1980s and captured Kabul. Their objective is to prevent Afghanistan from any external influence and levy their interpretation of Islamic Laws.

Violence in Afghanistan grew massively in two decades. As per the United Nations Security Council reports, The Taliban has taken an estimated 50% –70% control of the Afghan region.

All of this leaves Afghan women facing a precarious future under Taliban rule once again. There have been many breakthroughs in women’s rights over the last 20 years, which the current situation appears to be clearing almost overnight. Before the Islamic Revolution, women were already high in number in attending university. Moreover, Hijab was widely worn but many women also chose western style clothes including mini-skirts and sleeveless tops. Picnic culture was an important part within Middle Class Iran, which hasn’t changed now. The only divergence that has been added in the picnic culture is the restrictions of interaction between male and female. Women used to walk freely in the streets of Iran back then.

Also Read : Afghans Are Rising Up Against the Taliban More Than Ever Before

Even as early as the 1920s, women’s issues were an important part of national construction agendas. Women are not an isolated institution in Afghanistan; their fate are intertwined with and determined by historical, political, social, economic, and religious forces.

Gender dynamics and women’s status in Afghanistan have been transformed by two critical eras in the Afghan history. The first period began in 1923, during the reign of Amanullah, which included rapid reforms to improve women’s lives and positions in the family. The second period was led by the communist-backed Peoples Democratic Party of Afghanistan (PDPA).The two eras demonstrate that Afghanistan has a longstanding history of progressive efforts to provide women’s rights.

Amanullah liberated Afghanistan from British and also helped in the liberation of women. He also said that Islam did not require women to cover their bodies or wear any special kind of veil. Moreover, Amanullah’s sister Kobra formed an organization for women’s protection in the 1920s, which encouraged women to bring their grievances and injustices to the organization and to band together to oppose oppressive institutions. Women were encouraged to further their education. By the late 1950s, there was a preconceived need for women to be economically active in order to assist Afghanistan in achieving its targeted development goals.The third Constitution, ratified in 1964, granted women the right to vote and allowed them to run for office. The late 1970s saw the start of the second era of intense women’s reform. The 1970s saw an increase in women’s education, university faculty, and Parliamentary representation.

The discussion on women’s situation in Afghanistan has once again opened up the debate. The impact on women has been particularly severe, because women’s lives are frequently used as raw material after the Taliban took over Kabul. Images of women have been covered up or vandalized on storefronts around Kabul. Taliban have reimposed restrictions on women in some areas taken in 2021.

All the women in Afghanistan are supposed to follow Sharia law under Taliban. It states: a women can go out in the market but accompanied by a male family member either a child or an adult. Women are not allowed to interact with boys under 12 or men who are not their family. Women should not be seen on the street unattended without a burka. Since no man should hear a woman’s footsteps, high-heeled shoes should not be worn by women. A women voice shouldn’t be heard by a stranger when she is speaking loudly in public. In order to prevent women from being seen from the street, all the windows on the ground and first floors of residential buildings should be painted over or covered with a screen. Women are prohibited from having their pictures taken, filmed, or displayed in newspapers or books or in stores, or at home. To remove the word “women” from any place’s name. Women are not allowed to appear on their balconies. Women are forbidden from appearing on radio, television, or any public gathering. Women would be stoned to death if accused of Adultery. It is a reminder of the bleak past that women witnessed during the terrorist group’s reign from 1996 to 2001, when stark rules were imposed based on the Islamic Sharia Law. Women in Afghanistan’s capital have been overcome by grief and panic. With two-thirds of the population under the age of 30, the majority of women in this country have never lived under the Taliban rule. Many young women in Kabul share the same contradictory feelings of hopelessness and denial. Habiba, a university student, denied wearing burkha stating that, “I accept the burqa, it will exercise power over me. I am not ready to let that happen.”

Moreover, Gulpari, a 39-year-old afghan mother, informed The Nationals that The Taliban demanded that our daughters marry them. They stated that if a family had two daughters, at least one of them should be given in marriage to the Taliban.

A statement purportedly issued by the Taliban and widely circulated on social media directed to provide them with a list of girls above 15 and widows under 45so that they could be married to their fighters.

Ironically, Taliban spokesperson promised to allow girls to study and women to work, but with an ambiguous caveat along the lines of “as permitted by Islam.” Another Taliban official stated that women should be allowed to serve in government.

“We assure that there will be no violence against women,” the spokesman, Zabihullah Mujahid, said. “No prejudice against women will be allowed, but the Islamic values are our framework,” they said.

Women who accept fundamentalism as a way of life do not blame Islam for their impoverished and oppressed lives, but rather the corrupt government, Talibans, and distorted interpretations of the Quran.

IIT Delhi to Start Bachelor of Design from Next Session