The Indian health sector has always been at the mercy of callous politicians and policy makers. Now they are going to have private hospital reps in public health committee. 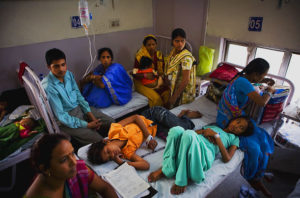 he constitution, by the Fifteenth Finance Commission, of a HLG to examine the strengths and weaknesses for enabling balanced expansion of Health Sector, is not a moment too soon. The objectives of the HLG are: To evaluate the existing regulatory framework in the health sector and examine its strength and weaknesses for enabling a balanced yet faster expansion of the health sector keeping in view India’s demographic profile; To suggest ways and means to optimize the use of existing financial resources and to incentivize the state governments’ effort on fulfillment of well-defined health parameters in India; and to holistically examine best international practices for the health sector and seek to benchmark our frameworks to these practices for optimizing benefits keeping in mind our local issues.

The objectives are unexceptionable, especially in the light of the low commitment by current and previous central governments to public expenditure on health. The current NDA government has been particularly brutal on health allocations. The health ministry has an allocation of only Rs30,129.61 crores for 2018-19 against a projected plan outlay of Rs34,882.32 crores under the flagship program of public health, the  National Health Mission (NHM).

Current health expenditures overall have been just about 0.3% of the GDP whereas the National Health Policy (NHP) 2017 has targeted that the public expenditure on health (by both centre and states) should reach 2.5 percent of the GDP by 2025.

Setting up of the High Level Group (HLG) is significant, but it requires health finance experts and consumer and patient representatives.

The High Level Expert Group (HLEG) for Universal Health Coverage in 2011 had aimed to reach the target of 2.5 % of the GDP by 2017, out of which 40 percent had to be provided by the Central government, which was to allocate at least one percent of GDP. If you factor in inflation the allocations have actually decreased. Many of the children who died in Gorakhpur in that tragic episode who had encephalitis (brain fever) were short served by an act of cutting the nose to spite one’s face. In 2016-17, the UP State government could not spare Rs. 30.40 crores from its own financial resources for the programme dealing with encephalitis (which also supports special children’s wards in hospitals like Gorakhpur). It asked for this money from the Central government, where its own party rules, and got Rs 10.19 crores or one third of the required Rs. 30.40 crores. The encephalitis scenario worsened the following year, 2017-18. The   budget approved for the programme was cut to Rs. 5.78 crores!

It is hardly necessary to say that more money in the health sector is required – both by the Centre and the States. The States takes their cue from the Centre, except in states like Tamil Nadu and Kerala. Health is an orphan; it is nobody’s baby as it is politically not important.

It is in the light of this public health crisis aggravated by the neglect of health allocations, the setting up of the High Level Group by the 15th Financial Commission is significant. But the NDA government reveals its lack of vision, or diluted its objectives, by choosing two private sector eminent doctors without any public health experience in the High Level Group: Dr. Devi Shetty, Chairman, Narayana Health City, Bengaluru; and Dr. Naresh Trehan, Medanta City, Gurgaon. There are at least two other representatives, among the other four, of the public sector: Dr K. Srinath Reddy, President, Public Health Foundation of India and Dr. Randeep Guleria, Director, AIIMS, New Delhi (Convenor), which may repair the damage.

But with Fortis and Medanta being in the news for the wrong reasons, getting its representatives, Dr. Shetty and Dr. Trehan, with their conflict of interests – their interests being opposed to free public health care – the NDA Government has belied its intentions, namely use the recommendations to further dilute support for public health and project the private sector as the panacea. Indeed, Dr Shetty and Dr Trehan have no relevant experience for the task. The Committee requires health finance experts and consumer and patient representatives, persons with integrity and credibility, if the government does its due diligence. Otherwise, the Commission’s recommendations will be like the government’s decreased allocations, a letdown.

(Data used in this article from JSA literature, 2018).

The writer works on access issues in health and pharmaceuticals. He is a graduate of IIT Kharagpur, IIM Bangalore and has studied epidemiology at John Hopkins University, USA. He can be reached on twitter @ChinuSrinivasa2.

No goodbyes: An account of Afghani refugee settlement in India