The RTI application had sought details of the file notings, Cabinet notes, Census or survey data and correspondence received from the office of the Prime Minister (PMO) in relation to the Quota proposal to amend the Constitution. 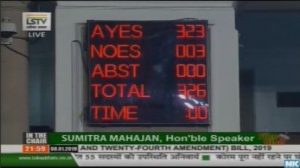 A month later after the January 2019 decision of 10 per cent Quota Law or the economic reservation for the upper caste poor came into being, Government has refused to share the details of how the entire process of law-making was carried out, as per a RTI revelation.

Citing ‘Exemption from disclosure of information’ as per the provision under Section 8(1)(i) of Right To Information (RTI) Act, 2005, the CPIO (the Central Public Information Officer) stated that “the requisite information cannot be provided”.

However, the same Section of the transparency law goes further to state, ‘Provided that the decisions of the Council of Ministers, the reasons thereof, and the material on the basis of which the decisions were taken shall be made public after decision has been taken, and the matter is complete or over; Provided further that those matters which come under the exemptions specified in this section shall not be disclosed’.

RTI Activist Venkatesh Nayak, who works as Programme Coordinator, Access to information Programme with NGO Commonwealth Human Rights Initiative (CHRI), had sought details of the file notings, Cabinet notes, Census or survey data and correspondence received from the office of the Prime Minister (PMO) in relation to the said proposal to amend the Constitution, in a request to the Union Ministry of Social Justice and Empowerment.

“The 10 per cent Quota Law has already come into force. Nevertheless, the CPIO seems to think that the matter is neither completed nor over. Despite quoting the proviso requiring proactive disclosure of Cabinet papers, in his reply, the CPIO does not seem to have applied his mind to its import, thanks to the haste with which he made his decision on the information request,” said Nayak.

“As the 10 per cent Quota Law had received widespread support, it did not involve any sensitive issues connected with national security, and had already come into force, I was hoping that the Social Justice Ministry would disclose all the information sought in the RTI application. Surprisingly, the CPIO thought otherwise. He rejected the entire application within a week of receiving it (a speed matching that of the legislative exercise itself!),” added Nayak.

“The Union Cabinet is said to have approved the proposal to amend the Constitution in this regard on January 7. It was tabled in the Lok Sabha on January 8, debated and passed on the same day.”

Subsequently, the Rajya Sabha gave its approval after a debate on January 9. President of India gave his assent to the Bill four days later on January 12. This legislation was notified as the Constitution (143rd Amendment) Act, 2019 in the Official Gazette, the same day. On January 14, the Union Ministry of Social Justice and Empowerment issued a gazette notification stating that the law had come into force.

Recalling the June 2012 decision where the Central Information Commission (CIC) had issued a direction that all Cabinet notes and materials related to Bills tabled in Parliament must be placed in the public domain within the next seven days, the RTI activist said that “the principle of transparency must be taken into account”.

“Citizens must have access to all materials pertaining to legislative proposals introduced in Parliament, so that they may discuss it and share their views with their elected representatives in Parliament,” he further said.

As per Nayak, “the entire legislative exercise surrounding the 10 per cent Quota Law lacked any kind of transparency or a consultation process with the people of India”.

“On January 7, 2019, the media reported that the Union Cabinet had approved the 10 per cent Quota proposal for tabling in Parliament. Strangely, there was no press release about this subject for that date on the website of the Press Information Bureau or on the website of the Social Justice Ministry. The first mention of this subject is contained in a press release of the next day, namely, January 8, where the Hon’ble Prime Minister congratulated the Lok Sabha for passing the Constitution Amendment Bill,” he stated.

Further, Nayak stated that the 10 per cent amendment proposal did not comply with the Pre-Legislative Consultation Policy adopted by the Central Government in 2014 which states that draft text of the legislation has to be placed in the public domain for thirty days so to invite people’s suggestions and views.

“The 10 per cent Quota Bill ought to have been made public before being tabled in Parliament, but that was not the case. “I filed my first appeal on last Friday. So, will wait for the appellate authority’s decision which will take 45 days maximum under the law,” Nayak told Delhi Post.