Developed by the State Council of Educational Research and Training (SCERT), the curriculum will inspire students through various entrepreneurial stories, case studies and many mindfulness activities and approaches, says the Delhi Government. 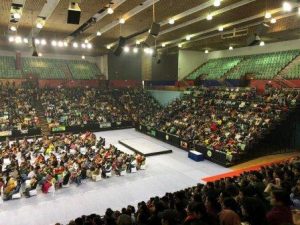 To develop the entrepreneurship mindset among students and solving “employment issues” in the country, the Delhi Government launched ‘Entrepreneurship Mindset Curriculum Framework’ for classes 9 to 10 in state-run schools. Sharing how when an Indian works in an American company, India just gets salary of one person, Deputy Chief Minister Manish Sisodia stressed “US gets all the profits in the world”. “Then, how we hope that India’s economy competes with US? We’ve to ensure that our country’s brain is used for our gain,” he pointed out.

Developed by the State Council of Educational Research and Training (SCERT), the curriculum will inspire students through various entrepreneurial stories, case studies and many mindfulness activities and approaches, highlighted the government.

Sisodia while launching the initiative announced that the Government would be giving an entrepreneurial “seed money” worth Rs.1,000 each to students of class 11 and 12, and Rs.5,000 each to college students from the next session.

The cost of this scheme has been calculated to be approximately Rs.40-50 crores which would be allocated by the Delhi Government soon.

The curriculum is expected to not have book or exams or evaluation but overall “personality development”. The framework is expected to focus on key aspects such as confidence, creativity and critical thinking as well as skills like problem-solving, collaboration and communication.

“By launching the Entrepreneurship Mindset Curriculum Framework, the Delhi Government has set an example for the entire world,” Sisodia said.

According to Sisodia, the curriculum is expected to “bring about a paradigm shift in the education system in the way students explore and learn and in the manner teachers facilitate and guide these exploratory processes”.

He said, “Entrepreneurship can be the answer to India’s unemployment problem. We have given education to our children but not made adequate opportunities for them. The country’s economy is not built by job seekers but by job providers,” he further said stressing on the fact that “entrepreneurial mindset was required for all professionals to be successful in their career”.

The syllabi will be curated over the next two months for teaching entrepreneurship-oriented skills over the next few months by a team of 14 people including social workers, mentors and members of SCERT. A pilot which would include teachers from 15-20 schools will be held from April 2019 onwards. The project is expected to be implemented at the school level from July onwards.