Chief Minister HD Kumaraswamy had all along been nonchalant about the supposed threat his government was facing.

Now it is official – the current crisis enveloping the Congress-JD (S) government in Karnataka has blown over. The latest episode of the Karnataka political drama, triggered by a handful of disgruntled Congress MLAs, has come to an end after a threat of disqualification and action against members drifting away from the party line.

Congress MLA from Vijayapura, Anand Singh, one of the MLAs who went missing, had resurfaced and presented himself before the media along with key Congress trouble-shooter, DK Shivakumar, even as television channels were reported about his rebellion.

“I am very much in the party only and have come to meet my leader (DKS)”, he told media persons even as the move to topple the HD Kumaraswamy Government appeared to fizzle out, much to the embarrassment of the BJP leadership that can ill afford any damage to its image ahead of the 2019 General Elections.

Which is why, the top leadership directed the 102 Karnataka BJP MLAs, kept under “lock and key” at a seven-star super luxury resort in the BJP-ruled Haryana, to return to Karnataka, signaling an end to the political drama that was playing out on television channels.

State BJP chief and former Karnataka Chief Minister BS Yeddyurappa had confirmed the return of all the BJP MLAs late on Wednesday night, also an indication that the move to topple the KumaraswamyGovernment had failed, as of now. A couple of days ago, the former Chief Minister had indicated to all his party MLAs that good news was around the corner.

But, developments did not run along the script.It became clear as the missing Congress MLAs gave out enough indications that they were not deserting the Congress, at any cost.

Another ‘missing’ MLA BheemaNaik appeared at a guest house in Bengaluru. He said that he had gone out on personal work and that one of his phones was dead. Naik claimed that all the while, he was in contact with Congress leaders and that the thought to quit never occurred to him.

Top Congress leaders, by now, breathing a bit easy, declared that “none of the Congress MLAs will desert the party and said that efforts by the BJP to poach them will result in failure”.

It was DK Shivakumar who was tasked with getting all the MLAs back. He continues to maintain that there was no threat to the government and it will last for five years. As do others too, the Janata Dal (S) leaders too. 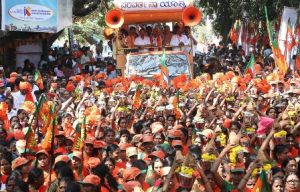 Chief Minister HD Kumaraswamy had all along been nonchalant about the supposed threat his government was facing. “The BJP has been trying to dislodge a functioning government ever since we took office, as it could not stomach the fact that it lost the elections. I have the numbers. I am in touch with the MLAs and there is absolutely no threat to the government. We will complete our five years term,” the Chief Minister told media persons ever since the drama began to unfold last Sunday.

Four disgruntled Congress MLAs had checked into a hotel in Mumbai, from where they were allegedly trying to garner more of their colleagues to dump the Congress. The plan was to get some 15 MLAs to resign, to bring down the magic number inside the house. Two independent MLAs had withdrawn support to the government and announced they will support the BJP. They sent letters to this effect to the state governor.

But clearly, the disgruntled Congress MLAs, led by Ramesh Jarkiholi, fizzled out. Touted as Operation Kamala 2.0, in which the BJP was to poach sufficient numbers from the Congress and Janata Dal (S) camp to install Yeddyurappa as the Chief Minister, failed in its mission, leading to a flurry of barbs from the Congress.

#OperationLotus was a clear reference to BJP National President Amit Shah. The Congress party’s threat of disciplinary action appeared to have done the trick. It has called for a legislative party meeting of its MLAs on Friday, attendance of which is a must.

“We will be holding Congress Legislature Party (CLP) meeting on Friday where everyone will be present,” Kharge said.

The BJP hit back saying that in fact, it was the Congress and JD (S) that were poaching its MLAs. Which is why, the BJP took all the MLAs to Delhi, for the party’s election preparatory meetings and then lodged them in a seven-star hotel, lest they are taken away by the ruling combine in Karnataka.

The writer is senior journalist based in Bengaluru

Being a refugee is definitely the harshest experience: Ubais Sainulabdeen