The urban local bodies’ elections were held in 21 districts including three city corporations such as Mysuru, Tumakuru and Shivamogga in Karnataka. 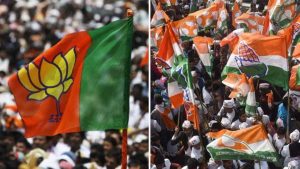 K arnataka Chief Minister H D Kumaraswamy today said the people of the state have extended their fullest support to the coalition government by electing Congress and JD(S) candidates in the urban local bodies’ elections held on August 31.

“We did not campaign much in the urban local bodies’ elections. Bharatiya Janata Party (BJP) leaders formed teams and campaigned extensively in support of their candidates. The BJP was said to be ahead of us in urban areas but it has suffered a setback in the elections held to the urban local bodies,’’ Kumaraswamy told media persons at Vidhana Soudha in Bengaluru.

The elections were held in 21 districts including three city corporations such as Mysuru, Tumakuru and Shivamogga in the state.  While BJP has established a clear majority in Shivamogga City Corporation by bagging 20 wards out of 35 wards, Congress has managed to win only seven wards while JD(S) was relegated to third position with just two seats. Though BJP emerged as a single largest party in Mysuru by winning 22 wards out of 65 wards, it is believed Congress and JD(S) coalition may retain power with 19 and 18 wards respectively. The result in Tumakuru is also on the similar lines. The BJP had bagged 12 out of 35 wards while the Congress and the JD(S) bagged 10 wards each.

KPCC working president Eshwar Khandre told the media that outcome of the local bodies’ results would be a pointer to the Lok Sabha elections. “The BJP’s popularity and influence on the voters has subsided. The voters have turned against the BJP-led Union Government. However, I am compelled to feel these results will have some impact on the Lok Sabha polls,’’ Eshwar Khandre said.

Commenting on the election results, Minister for Public Works, H D Revanna has said the JD(S) had performed well in the urban local bodies’ elections. “We will have talks with Congress to retain power in Hassan Town Municipal Corporation,’’ Revanna said.

Interacting with media persons during the Bengaluru tour, Deputy Chief Minister Dr G Parameshwara has said the voters did not give clear majority to a single party in this election. “We have a tie-up with the JD(S) at the state level. We will have similar understanding at the local level too. There was a speculation on the BJP emerging as the single largest party but the voters preferred Congress candidates. In my constituency, Congress had won five wards. Now, we have bagged same number of seats. We prevented the BJP coming to power in Koratagere Town Municipal Corporation,’’ Dr. Parameshwar said.

“Former prime minister and JD(S) supremo H D Deve Gowda opined that BJP could be prevented from coming into power by forging an alliance. “The JD(S) will retain power in all local bodies across Hassan district. We will join hands with Congress to come into power in Mysuru and Tumakuru City Corporations,’’ Deve Gowda said.”

Meanwhile, Karnataka State BJP president B S Yeddyurappa has said the outcome was not up to the expectations. “We expected to bag more wards and municipal corporations. Congress and JD(S) candidates have misused money to influence the voters,’’ Yeddyurappa said.

A case of suspected acid attack

A Congress candidate and his nine supporters were injured in a suspected acid attack today during a march to celebrate his victory in the Karnataka urban local body elections.

“Inayatullah Khan, who won the election from ward No. 16 in Tumakuru — around 70 km from Bengaluru, was taking out the procession in the morning when an unidentified person sprayed some liquid on the crowd and fled the scene, police said.”

Around 10 people felt a burning sensation and were rushed to a nearby hospital where they were administered first-aid. They suffered minor injuries, among which Khan had the maximum burns on his face, Tumakaru Superintendent of Police Divya V Gopinath said.

Doctors said the liquid might be some low-intensity acid like bathroom cleaner, the SP said. Police suspect the incident to be a handiwork of Khan’s rival, whose name they did not disclose. Nobody has been arrested so far and no complaint has been lodged, the officer added.

Kerala Floods: It is time to rethink about the Gadgil report says MLA Hibi Eden