Rethinking the US Immigration Policy: Lessons from India and Mexico

The immigration policy of the US will impact migrants hailing from India and Mexico; with the ban on H-1B visa, the popular opinion is not going to be in favour of immigrants.

Migration has been a keenly debated topic across the world, and its relevance has become much more crucial in times of the pandemic. The recent US immigration policy under 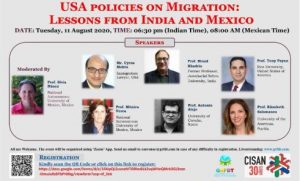 President Donald Trump is no exception, which prioritises the flow of immigrants by giving precedence to the US nationals. In this context, the Global Research Forum on Diaspora and Transnationalism (GRFDT) along with the Centre for Research on North America (CISAN), UNAM, Mexico, jointly organised a webinar titled “US Policies on Migration: Lessons from India and Mexico” to understand the US immigration policy on migration and assessing its impact on India and Mexico; the two most significant immigrant-sending countries.

“The US, under the leadership of President Donald Trump, has imposed restrictive policies against migrants and asylum seekers before the onset of COVID-19 pandemic”, said Prof. Sivia Núnez, National Autonomous University of Mexico, Mexico, while moderating the session. She shared further that in the context of COVID-19, the Title 8 Enforcement Actions and Title 42 Expulsions empower CBP’s (US law enforcement agency) immigration authority to prohibit the entry of certain persons in the US from the borders of Mexico and Canada in the interest of public health system. Hence, there will be damaging effects of these kinds of challenges on the migrants hailing from the neighbouring borders.

Cyrus Mehta, Immigration Lawyer, USA, explained the nuances associated with the US immigration policies under President Trump. America has always been a nation of immigrants; however; President Trump ascendency has changed how the US perceives migrants. He brought the example of Mexico, and argued: “if Mexican immigrants hail to the US in the undocumented capacity they are often labelled as criminals and rapist”.

Mehta stated that “President Trump has used the provision of section 212 of the US Nationality Act to far off any groups of foreign nationals if they are detrimental to the interests of the US as part of the ‘America First Policy'”.

Using the provisions of the Act, which was earlier used in low capacity, the Trump administration has weaponised the COVID situation to reorder US immigration law to restrict immigrant visa further.

Is There a Crisis on the US–Mexico Border?

According to Prof Mónica Verea, National Autonomous University of Mexico, Mexico, President Trump has hardened the US policies on the integration of Mexican asylum seekers in the US through the establishment of multiple executive orders and federal regulations. Although the flow of Mexicans to the US territories has increased significantly in the past, Prof Verea observed that it had posed considerable pressure on Mexican president Andrés Manuel López Obrador  to impose enforcement policy to curb immigration. Despite the lack of concrete efforts on the ground, it has proved to be a daunting task for the Mexican administration to carry out the objective.

Alternatively, Prof Antonio Alejo, University of Coruña, Spain, considered Mexican immigrants in the US without any ‘formal recognition’ in the host territory. Considering such issue, to him the political landscape has cultivated ‘white nativism’ sentiments among the US nationals, hence making Mexican migrants’ assimilation difficult. Similarly, concerning the issue of deportation, he believed that it is a challenge for the Mexican migrants to go back and integrate again in the country of origin. Further Prof Alejo shared the optimism that Mexican grassroots-level organisations could help migrants identify opportunities to restart their lives with dignity. In spite of the deportation, these Mexican deportees consider the US as their home.

Highly Skilled Indian Migration to the US

Prof Binod Khadria, Former Professor, Jawaharlal Nehru University, India, presented succinct historical and geopolitical lessons for India concerning the US policies on migration that goes back to 500 years when Columbus discovered America. The US policy on immigration has not been welcoming concerning the unskilled migrants. On a similar notehe argued that in the year 1917, the US congress passed ‘literacy test bill’ to curb Indians, Chinese, Fijian and people from Asiatic origin enter into the US who were not literate in English language.

However, Prof Khadria believed that the “policymaking has been a democratic process in the Congress, but there have been times, when executive orders override article 212 (f), which comes handy to dictators for putting in place what they want, in terms of violating the rights of the people”

The historical narratives also suggest that Indian IIT graduates and professionals were attracted to the US due to unemployment back in the home country. The recession of 1992, Prof Khadria argued, has further compelled Indians to give up Indian nationalities and naturalise themselves into American citizenship. Subsequently, he brought in the discussion a relevant category of IIT graduated and professionals who flooded the Silicon Valley with their technological skills and expertise and eventually revolutionised the US economy.

The future of the US immigration policies will depend upon the elections scheduled for November 2020 between President Trump and Joe Biden. In terms of whether there will be a comprehensive immigration reforms after the election, Tony Payan, Rice University, US, believed that due to COVID-19 and generated unemployment in the US, the priority of the administration is going to be for these 30 million citizens or residents who are unemployed. So, it would be difficult for Biden to reverse some of these executive orders. Secondly, while the US has not defined border security, he identifies that the move will give room for manoeuvre in restricting immigration and asylum seekers. Finally, Payan proposed that the issue of 11 million undocumented immigrants will create another hurdle for Biden.

On the policy front too, Prof. Elizabeth Salamanca, University of the Americas, Puebla, believed that the Trump administration “has dismantled and reconstructed many elements of the US immigration system that was last reformed in 1996”. She endorsed that skilled and high-skilled migrants will be affected by measures the Trump administration has undertaken, such as suspension of various categories of visas like H-1B. In the long run, such changes will prove detrimental to the US economy. She further asserted that “if Biden comes to power, it would be difficult for the new administration to rescind the changes made to the immigration laws that Trump administration has implemented”. However, if that happened, it would require massive financial personnel and bureaucratic investment to carry out such an objective.

There is a dire need to focus on the impact of changed immigration policies on India and Mexico. The importance is to rethink in terms of what the prospective migration scenarios will emerge shortly. As Prof Amba Pandey remarked, “while talking about migration and immigration; we tend to talk so much about policies, but we also have to relate those policies to the local politics”. In the case of India, according to Mehta, the H-1B visa is used widely by the Indians high-skilled workers and professionals. The ban on the issuance of the permit will impact immigrant capacity to sponsor their family members. As variance to the argument put forward by Mr Mehta, Prof Pande believed that the US ban on foreign nationals would not affect the Indians. Rather, Indians will find their new destinations; as an alternative, the focus should be on how much India and Mexico are capable of refilling the depleted skill gap globally.

For Prof Khadria, a closer look at the history of migrant movement between India and the US will help to shape the future lessons. However, he promptly acknowledged that the student’s mobility, especially of STEM students and STEM professionals, to the US would continue. At the same time, from the point of the parents, as the region is profoundly affected by the virus, he argued; will withhold them to take that risk of sending their children’s and are likely to choose a less-risky country, like Canada or Mexico.

In line with Prof Verea’s argument, Mehta observed that the ban on visas will have a detrimental effect on the Mexicans when people try to cross into the US from Mexico and apply for the asylum in the US.

Interestingly, the financial situation and political climate under Lopez administration compelled many US migrants from Mexico to move towards the US and re-enter their own countries, which will further pose a challenge. In the wake of the new immigration rules and their possible impact on care workers, Payan doesn’t foresee that the strict US immigration law will initiate any shift in the labour market for women who provide healthcare services for the elderly and childcare services. He took the case of women workforce employed privately to substantiate his argument and claimed that such emerging labour demands had met in terms of home-based coaching.

Several other repercussions were pointed out by Prof Elizabeth, for the workers and native people, especially during COVID-19. She pointed out that “backlogs may appear in the processing of visa applications for most categories of migration immigrants and non-immigrants”. As a result, many potential high-skilled migrants may reconsider their options and cancel or delay their immigration.

Despite the pandemic in place, the current situation has shown that with the changes in the immigration law, the US will become much picker when it comes to who can come in. Payan had remarked that the trend is likely to change the demand towards much higher-skilled immigrants. Henceforth, countries like India and Mexico must now shift their policy to provide more opportunities for their own populations.

The writer is a Research Scholar with the Centre for West Asian Studies, Jamia Millia Islamia, New Delhi.