Visuals of large mass gatherings without masks and social distancing in tourist hotspots can ‘nullify the progress made against the virus.’

‘Revenge travel’ will only lead to a rise in the number of Covid-19 cases in the country, officials at the Health 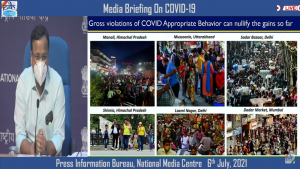 Ministry said on Tuesday. ‘Revenge travel’ is a term being used lately to refer to the spurt in outstation/foreign travel by citizens post Covid-induced lockdowns as retaliation against being trapped inside their home for weeks.

Speaking at a press briefing in New Delhi, Luv Agarwal, Joint Secretary, Ministry of Health and Family Welfare, said that the mindset of people to travel to hill stations or markets as soon as lockdowns are removed, will nullify all gains made against the virus.

“People think that as soon as restrictions are opened, the virus goes away. But this is not true. We have seen visuals from Himachal Pradesh and other popular tourist spots of people roaming around without masks and social distancing. The virus has not gone anywhere. It continues to circulate in the society. These gross violations of Covid appropriate behavior can nullify the gains we have made so far,” he added.

Dr Agarwal further showed a few instances of the said violations from Shimla and Manali in Himachal Pradesh, Mussoorie in Uttarakhand, Laxmi Nagar and Sadar Bazaar areas of Delhi, and the Dadar Market of Mumbai.

He added, “We have been fighting Covid since the beginning, and one of the most important components of that fight is community involvement. Government can only enforce rules. The virus cannot be contained by regulatory approach and needs the support of community members. People have been at home for so long that they think that travelling is safe now. But all our actions need to be taken with Covid appropriate behavior in mind.”

Seventy-three districts in India are still reporting more than 10% case positivity, which is a worrying trend. This translates to high spread of infection in these areas and necessitates following strict containment measures. As per government data, 18 districts in Arunchal Pradesh, 10 districts in Rajasthan, and 9 in Manipur reported over 10% case positivity between June 29th and July 5th. 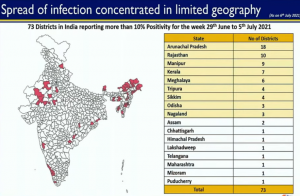 As visible, the north-eastern states of Arunchal Pradesh, Manipur, Meghalaya, Tripura, Sikkim, and Nagaland have 44 districts reporting over 10% case positivity. “The second wave of the virus continues to dominate these areas,” Mr Agarwal added.

Expressing concern, Director General of Indian Council of Medical Research, Dr Balram Bhargava said that it is crucial for north eastern states to continue testing. “We are encouraging them to conduct Covid-19 tests and report those tests regularly and at the same pace. Understanding test positivity rates will help us battle the virus, as it has nationally, as well. But the increased amount of rainfall in the area can hamper testing. Hence, we have to ensure that testing continues on a rapid scale in the area,” he added.

Dr Bhargava further stressed on the need to continue testing for the virus at the same level nationally. Currently, India is conducting 18 lakh tests on average daily, which translates to 1400 tests per million populations. While this is ten times the requirement mentioned by the World Health Organisation, it needs to be sustained. “Much of our public health response was guided by test positivity rates in the first and second wave of the virus. While 73 districts are reporting over 10% test positivity, 65 are reporting between 5 to 10% test positivity rates. The fact that 595 districts are reporting less than 5% test positivity signals that the second wave has come down in some areas, but that it continues in others,” Dr Bhargava added.

He further said that while a TPR below 5% means restrictions can be eased, anything above 10% should mean strict adherence to the restrictions.

On Monday, July 5th, India reported 34,703 fresh infections of Covid-19, continuing the trend of the downfall of the second wave. In the last nine days, India has registered less than 50,000 cases daily. There has also been a decline in the number of districts reporting high cases. Last week, 91 districts reported more than 100 cases.

Dr Agarwal further added that 80% of all new infections are coming from 90 districts. A majority of these districts are located in Maharashtra (15), Tamil Nadu (15), Kerala (14), Odisha (11), Andhra Pradesh (10), Assam (9), and Karnataka (8). “This shows that the virus is spreading in localized areas in particular states and we need to contain it there itself. The MOHFW and Ministry of Home Affairs have issued guidelines to all states about localized intensive containment measures,” he added.

In another progressive development, the country has been registering more recoveries than the number of fresh cases. The recovery rate currently stands at 97.2%. As of the day, there are 4.64 lakh active cases of the virus.