Role of Indian Diaspora in development

It’s the time when we should all appreciate our Diaspora in different parts of the world for all the laurels they bring to our country by performing exceptionally well in any sector they are into. 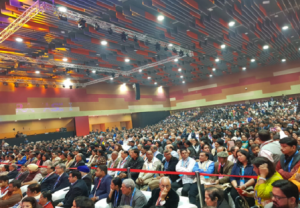 India recently celebrated the 15th Pravasi Bharatiya Diwas (PBD) from January 21-23, 2019 in Varanasi, India to commemorate the efforts of the Indian Diasporas across the world.

As a commemorative event, PBD started back in 2003 under the leadership of former Prime Minister late Atal Bihari Vajpayee. January 7-9 of every year was selected to celebrate this event as January 9 is considered to be an important date in Indian history – it was on this day that Mahatma Gandhi returned back to India from South Africa – it was decided to celebrate this day in the name of the Indian Diasporas across the world.

This year too, India celebrated PBD but on different dates owing to a request made by the Indian Diaspora to attend the Kumbh Mela and the Republic Day celebrations in India while on their visit. The theme of the event this year was kept as “Role of Indian Diaspora in building New India”.

“PM Narendra Modi has a strong affinity towards the overseas Indian community and it is witnessed in his every visit to a foreign country where he tries his best to interact with the Indian community at large.”

This is so because he realises how important the Indian Diaspora is for India’s development. Before realising its true potential, it is important to understand the term “Indian Diaspora”. Indian Diaspora refers to those people who migrated from territories that are currently within the borders of the Republic of India and it includes both, the NRIs (Non-Resident Indians) and the PIOs (Persons of Indian Origin).

Also read: India’s transformation is rapid: VP Naidu to Indian diaspora in US

Indian Diaspora plays a very crucial role in India’s development at all levels be it, political, social, economical, cultural etc. Terming the NRIs as India’s Brand Ambassador, PM Modi highlighted their crucial role in making India more advanced and developed. Indian Diaspora acts as a link between the host and the home country and is responsible for maintaining cordial ties between two countries at all levels, particularly at the political front. Even culturally, it is the Diaspora which is responsible for maintaining the rich cultural heritage of India on a foreign land and they have been successfully doing so, over the years wherever they reside. Economically, the remittances sent by the overseas Indians contribute immensely to the economic development of our nation. Socially, there are various Indian forums, organisations and institutions in the foreign countries that play a crucial role not only in preserving the richness of the Indian culture but also protecting the rights of those Indians residing there in cases of infringement.

“Indian Diaspora’s contribution towards India is on the rise and so is its importance. External affairs minister Sushma Swaraj has said that the ‘migration of the educated has brought laurels to India’.”

There have been various instances where the NRIs and PIOs have supported India with both manpower and money during times of natural calamities or when India was in the dire need of it.

Thus, it is the time when India should move ahead with the vision of connecting more with its Diaspora across the world. Narendra Modi in his tenure as the Prime Minister of India has set the stage in a more welcoming manner for the Indian Diaspora.

This is the reason that the 15th PBD was a huge success wherein various Indian origin eminent personalities from across the world were felicitated, awarded and encouraged to connect more with their home country and at the same time maintain the richness of India on a foreign soil.

It’s the time when we should all appreciate our Diaspora in different parts of the world for all the laurels they bring to our country by performing exceptionally well in any sector they are into. It’s the time when we all should move ahead to capture the potential of our Diaspora in a constructive way that brings name, fame and development for India at the global level.

The writer is a PhD Research Scholar with the Centre for European Studies, School of International Studies, JNU, New Delhi. She can be reached on twitter @MonikaGupta0107