The transmission rate of the RNA virus has necessitated rapid and accurate diagnosis to prevent its spread. 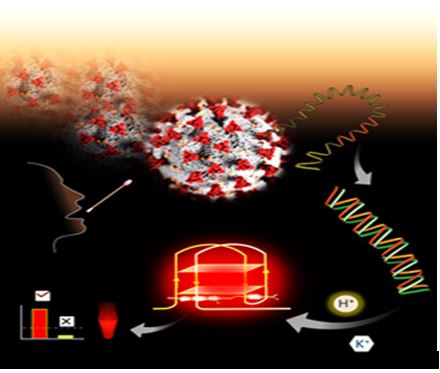 viruses and other pathogens. Its potential has been demonstrated for the detection of the Coronavirus.

Viruses are a major global threat to human health, with the ongoing COVID-19 pandemic caused by SARS-CoV-2 continuing to inflict catastrophic effects across the world. The unprecedented transmission rate of the RNA virus has necessitated rapid and accurate diagnosis to prevent its spread and to provide timely treatment.

Unravelling unique molecular targets specific to viruses is challenging yet critical for diagnosing emerging viral diseases. Nucleic acids and proteins are the primary targets in diagnostic assays of viral pathogens. Identifying novel sequences and conformations of nucleic acids as targets is desirable for developing diagnostic assays specific to a virus of interest.

The study team comprising scientists from Jawaharlal Nehru Centre for Advanced Scientific Research (JNCASR), an autonomous institute of the Department of Science & Technology, Govt. of India, and India Institute of Science (IISc), identified and characterised a DNA sequence within the SARS-CoV-2 genome, promises to be a tangible target for virus detection. Consequently, it has developed a molecular probe, which unambiguously recognises it and emits light in the red region of visible light, which can be used for detection and quantification.

Also Read: COVID-19 Pandemic May Have Been Caused by a “Lab Leak”

A highlight of the study is that it presents an entirely new strategy to target a unique, unconventional nucleic acid structure specific to the SARS-CoV-2 sequence using small molecules.  In contrast, existing fundamental concepts have been repurposed in the currently used diagnostic systems.

“Our platform is very general and modular in nature and can be easily adapted for the detection of various DNA/RNA based pathogens including bacteria and viruses such as HIV, Influenza, HCV, etc., by identifying and targeting unusual nucleic acid structures in their genomes and also adapting isothermal amplification protocols,” said Prof. T. Govindaraju of JNCASR, who led the study.

The team included Sumon Pratihar, JNCASR, Ragini Agrawal, Virender Kumar Pal, and Amit Singh of IISc. They have published a research paper on their work in the science journal, ACS Sensors of American Chemical Society.