E.coli is the most common foodborne bacteria causing illnesses including diarrhea, fever, and death if left undiagnosed and untreated, which makes its detection most important. 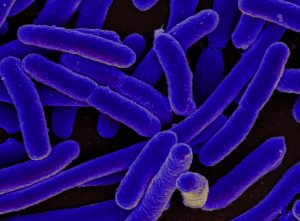 Traditional detection methods such as culture or PCR are time-consuming and require skilled manpower. Antibody-based ELISA tests have also been developed but the instability of the antibodies, high cost, batch to batch variation, and complex synthesis method limits its application.

A team of researchers at DBT-National Agri-Food Biotechnology Institute (DBT-NABI), Mohali, has come up with a solution. They have developed a probe based on assDNAaptamer. Aptamers are low molecular weight biomolecules widely used for bio-detection as they are stable, sensitive, selective, have low cost, and low batch to batch variation. They interact directly with the cell surface of the target rather than the nucleic acids and thus have the potential for whole bacteria detection.

The probe worked by a change in color: it changed from red to blue within an hour of incubation with E.coli cells. The cells were detected upto a concentration of 1,000 cells per milliliter without Graphene Oxide coating.

This substantially improved to a concentration of a mere 100 cells per milliliter with Graphene Oxide coating. The system was tried with coconut water samples and it worked well.

Also Read : Vouching for the mothers and newborns

Speaking to India Science Wire, team leader, Dr. Nitin Singhal, said the new probe could be used as a point of the care detection device. The method is simple, fast, and can be easily performed without any skilled manpower. “Some highly sensitive bacterial detection techniques like surface enhanced raman spectroscopy based biosensor, which detect 10 cells/ml are available. But, they involve sophisticated instruments and thus require professionals for handling”, he added.