Researchers at IIT-Indore synthesising a nano-based therapeutic agent that promises to be highly effective in treating the deadly disease. 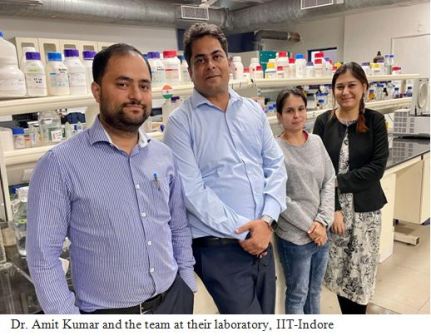 Technology-Indore synthesising a nano-based therapeutic agent that promises to be highly effective in treating the deadly disease.

Cancer has been one of the increasingly growing concerns of the healthcare sector. The treatment strategy and response against multidrug-resistant cancer, solid tumors, or brain-related cancers have been a primary challenge for researchers and physicians. Naturally occurring bioactive compounds offer a new path in cancer therapy.

But, the current delivery systems of medications are not adequate due to the multifactorial nature of the disease, especially metastasis, and recurrence, inaccessibility of the drugs due to biological barriers, inability to maintain therapeutic concentrations at the site of action, and the adverse effects of the drugs on the surrounding tissues.

In the new study, researchers at IIT-Indore have synthesised a nano composite that was found to be quite effective in reaching inaccessible sites, overcoming physiological barriers, maintaining the concentration of drugs, and reducing cellular toxicity. The composite was formulated by loading bioactive compound Piperine onto a co-polymer called PLGA.  Piperine, which is derived from the commonly used Black Pepper, has several therapeutic properties such as anti-inflammatory, anti-oxidant, anti-microbial, anti-fungal, anti-depressant, anti-angiogenic & anti-apoptotic, besides imparting a distinctive aroma and taste to cuisines.

The study was conducted by Dr. Amit Kumar and Dr. Abhijeet Joshi of the Department of  Biosciences and Biomedical Engineering, IIT-Indore. The team has published a report on their findings in the journal, ACS, Applied Nanomaterials.  “One of the major advantages of using nano carriers for the delivery of Piperine is that this can target the MDR cancer cells by releasing the cargo inside the cytosol mediated by the proton sponge effect”, Dr. Kumar said.

The work was a follow-up to a study conducted by the group in 2016 when they reported for the first time in the journal Scientific Reports how Piperine interacts with an oncogene called `c-myc’ and stalls the growth of cancerous cells.

Dr. Kumar said the group has further found through another recent study that a Piperine-like compound called PIP 2 too may be used as anticancer therapeutics as it also affects the c-myc oncogene expression.