The country has lately been engaged in a debate as to whether to roll back the recently amended Maternity Benefit Act or not. Even though the Act was for less than 10 percent women of our ever diminishing workforce, it was heartening to see media and policy makers discussing a near invisible issue. The debate was important because it brought the issues of maternity and childcare into public domain. Culturally, they are considered to be the responsibility of women within the family. And institutionally, market, State and family have internalised this culture.

In India, there are more than 40 million domestic workers, 75 per cent of whom are women. They either lack entitlement or are outside the security net due to poor implementation of acts and schemes. There are no sectoral policies or schemes in place. The drafts pending in the Parliament are neither discussed nor implemented. The Labour Ministry is still pondering over the decision to recognise them as “workers”.

“The invisibility and undervaluing of domestic workers is linked to the non-recognition and subordination of housework and care work.”

Davis (1981) writes, “as long as household workers stand in the shadow of the housewife, they will continue to receive wages which are closely related to the housewife’s ‘allowance’ rather than to a worker’s pay cheque.” They are ‘employed’ in the informal space of their employers’ home. On the one hand, there are hesitations to acknowledge “homes” as “workplaces”. On the other, the comfort zones of patriarchal social norms are retained by employing mostly women while commodifying housework.

So, what happens to the right of maternity benefits and childcare of the domestic workers, who most often are paid caregivers themselves?

Domestic workers are covered under the maternity benefits provided under The National Food Security Act (NFSA) in the form of nutrition supplementation and wage compensation. They are also covered under Unorganised Sector Social Security Act (USSSA), which notifies the health scheme Janani Suraksha Yojana and provides an incentive of Rs 1,400 for institutional delivery while the NFSA makes a commitment of at least Rs 6,000 to be provided to all pregnant women as per the conditions of the scheme. They are not entitled to any childcare provisions.

“An RTI filed by Dr.Vandana Prasad dated September 22, 2016 requesting the number of domestic workers covered by USSSA revealed that the Ministry of Labour had no data.” 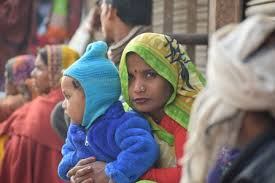 By not keeping any track on the data, the Ministry not only seems to disown the women workers, but also conveys complete lack of interest in defending women’s legitimate right to maternity benefits.

Some of the domestic workers in Delhi shared that those who had their deliveries in their villages had received benefits ranging between Rs 500 to Rs 1,400. The amounts varied for different states. Women from West Bengal quoted two different figures for boys and girls, where birth of a boy entitled the mother to a higher amount.

Ruksana (name changed) migrated because they had a huge loan to pay when they constructed their “pucca” house in place of their mud house. She had brought both her children with them. She went to work with her husband leaving the five and two year old in the custody of a ten-year-old daughter of her sister-in-law. The children started keeping sick due to which they had to be sent home to her in-laws. During childbirth, she did not receive any money from anywhere and was not even aware of the schemes in place.

Few years ago, Mahila (name changed), had lost her husband and her only daughter within a span of two years. She saw a new hope in her life after migration. She had married again and was pregnant. She did not expect any support from her parents. She was looked after by her husband and the community in a slum. She took an off for six months. She also knew that she was a migrant and had no claim on state schemes.

“But Lakshmi’s story stands out because she had access to childcare services. Her husband’s work as a construction worker gave her access to a crèche run by Mobile Creches on a construction site.”

She preferred domestic work because construction work required twelve hours of tedious work. Her elder daughter, who was five, was in the crèche till 4:30 pm from the morning and the younger one till 12:30 pm. She interspersed her paid work, housework and childcare and in between visited the crèche once to breastfeed the little one.  Even though there is a lot of back and forth involved, she feels that the crèche was a boon as it provided nutrition, safety and early learning to the little ones and the opportunity to do paid work and housework trouble-free. She believes that she did not get maternity benefits because she was not eligible for Aadhaar Card as a migrant. Her story puts forward the role played by a crèche in enabling a woman by sharing the family’s reproductive responsibilities.

Domestic workers represent a sector where a worker may have multiple employers and hence an “employer’s responsibility model” may not work for her. The State needs to step in and mitigate it. A universal wage-linked maternity entitlement for unorganised sector, where the entitlements are provided by the State, can enable domestic workers to access the provision. The Law Commission of India in its Report No.259 on Early Childhood Development and Legal Entitlements has recommended the following: Provision of maternity benefits should be made obligatory on the State and not left to the will of the employers and should cover all women, including women working in the unorganised sector; Every child under six should have an unconditional right to crèche and day care provided, regulated and operated by the State…. The provision of crèches should be made the responsibility of the State, not of the employer, especially in the unorganised sector.

Last, but not the least, maternity is “work” and not a paid “vacation”. Childcare involves nurturing and caring of the future workforce. It is time that we socially, politically and economically acknowledge this collective responsibility. If there is intent, the solution can be worked out.

Sudeshna Sengupta is an Independent Consultant and Researcher associated with campaigns on maternity entitlements and childcare.

The Curious Case of the Missing Feeder Systems