Shravasti: From Enlightenment to Education

Although the district administration is trying to improve the condition of the schools, the major challenge of altering the mentality of the local people still remains as an undone task in Shravasti.

Shravasti was host to Lord Buddha for 24 years as his annual vassavasa (rainy season retreat). Apart from Sahet-Mahet, an archaeological site, this city has monasteries and temples of Sri Lanka, China, Myanmar and Thailand displaying their native architectural traditions. Hence, Shravasti is a major tourist destination throughout the year. I was brimming with enthusiasm when I was asked to visit the district by the CEO, NITI Aayog as part of work assignments and learning. 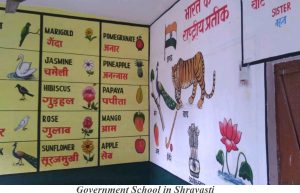 The highlight of my visit was the meeting with the Officer for Basic Education. The officer briefed me about the present scenario of education sector in Shravasti. Out of 1280 schools, 12 have smart classes benefiting 3035 students and more than 568 schools have educational wall art as a part of BaLA (Building as Learning Aid) initiative. Under the initiative ‘No bag day’, students are encouraged to participate in extra-curricular activities on Saturdays. Such innovative additions in schools are resulting in students becoming more engrossed in educational activities as well as extra-curricular activities. It has been found that 99.03 per cent of secondary schools boast of functional electricity facility. Reports show a constant rise in the data every week. Education fees and other necessities like – school uniform, school bag and books, sanitary pads – are complimentary for students. I had interaction sessions with multiple children. The students up to class 8 were well-versed with their syllabus – Mathematics, Science, and English to name a few. With the help of their teachers, students have created their own Parliament. The office bearers are elected through a secret ballot and the winners form ‘Bal Sansad’. All the students vote thereby, learning responsibility from a very young age. Amongst the several duties, the ‘Ministers’ promote the concept of ‘kitchen garden’ in schools and take care of the library facilities. The female participation in all the activities is promising.

Despite the above measures, the education sector in Shravasti has a gloomy picture.

The lack of qualified educators for high school and intermediate classes is the primary reason for this. I visited an intermediate school where 86 per cent of the posts for teaching staff were vacant.

The task of teaching a plethora of subjects whose fundamental basis of understanding are different – like geography, computers, and mathematics – fell on one individual.

In my opinion, this is hampering the inculcation of interest and understanding of either of the subjects for a student, and creating an extra load for the teacher. To worsen the situation, a teacher has been appointed as an ad-hoc principal to take care of the administrative duties of the school. While conversing with the female students at a high school, I got to know that several girls dropped out because of the significant distance between the school and their home. Further, parents are unwilling to pay for their child’s education.

As a result, there is a huge dropout from schools after class 8. Infrastructure is another challenge. In one of the schools, a classroom was used as an anganwadi centre. Due to shortage of electricity supply, schools face problem in running smart classes smoothly.

This is reflected in the enrolment and placement data of Skill Development Centre (SDC).

As per the Census 2011, the district has a population of 11lakh. Out of which only a few hundred are enrolled in Skill Development Centre (SDC) and even lesser are willing to relocate for jobs. Parents are of the view that their eight-year-old child can earn US$5 (approximately INR 380) by simply amusing a foreigner at one of the tourist destinations. So, there is no need to invest in his/her education after middle school.

The fertility rate adds to the severity of the situation. As per the estimate from the gynaecologist of the district hospital, women in the previous generation had 9–10 children on an average. The numbers are declining but even in the present generation, women bear six kids on an average.

Due to poor literacy rate, implications of being a school dropout are beyond comprehension for the people of Shravasti. 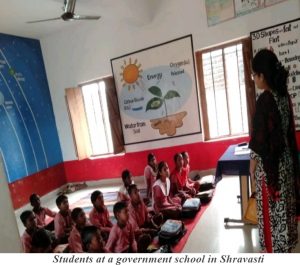 They don’t realise that education provides better standards of living and helps in moulding children into more productive members of the society.

In conversation with the District Administration, following concerns were brought to the forefront – internet connectivity and infrastructure. Due to this, Shravasti isn’t the first choice of posting for teachers and doctors. Officers pointed out that there were several requests made to hasten the hiring process of teachers which had no outcome. They requested to allow the district administration to take charge for the hiring. However, the requests were rejected.

Although the district administration is trying to improve the condition of the schools, the major challenge of altering the mentality of the local people still remains as an undone task. Apart from spreading awareness if industries and colleges are established, it will progressively improve the literacy rate as well as employment opportunities in the district.

(Disclaimer: The statistics are as stated by the officers during the visit. Views are personal)

The writer is a Young Professional at NITI Aayog. She is a graduate from IIT (ISM) Dhanbad and cares about literacy among children. She sponsors a girlchild’s education to bring a small change.