Selena’s De Una Vez is an empowering love anthem and has trended #1 on the iTunes Global Top Songs Chart and gaining universal popularity.

Getting back to her roots and embracing her Spanish heritage, popular singer-actor Selena Gomez has hit the top, once again, with her first Spanish-language recording in a decade. Upon its arrival, the song DeUna Vez 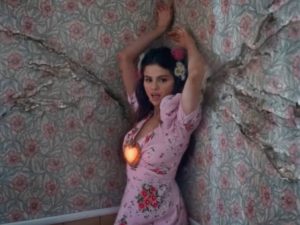 has trended #1 on the iTunes Global Top Songs Chart and gaining universal popularity.

Reconnecting to one’s foundations can also mean a search to reinvent oneself. When asked if this song meant something more than just a song, she said, “I am incredibly proud of my Latin background and I wanted to immerse in the culture. It felt empowering to sing in Spanish again. Just with all the division in the world, there’s something about Latin music that globally just makes people feel things, you know?” Talking about De Una Vez and kick-starting the year by embracing her roots, Selena says, “This has been something I’ve wanted to do for almost 10 years now; working on a Spanish project, because I’m so, so proud of my heritage, and just genuinely felt like I wanted this to happen. De Una Vez too is something I’ve wanted to explore for so long. I’m glad to start my year with it.”

Sharing her experience of writing and singing in Spanish, and all the preparations that went behind it, in terms of writing, production and shooting of this song, the actor says, “You know what’s funny? I actually think I sing better in Spanish. That was something I discovered. It was a lot of work, and look, you cannot mispronounce anything. It is something that needed to be precise.”

Apart from the music, composition, and visuals used, the story that the song conveys is also a huge reason behind the success of the song. Dancing her way around a house that gives off a very earthly vibe, with a bedroom full of freshly growing plants to a colourful kitchen with the stove ablaze, animated furniture and musical instruments coming to life alongside little lamps, the 2:48 video sure is a visual treat. The elements and the backdrops used were also spot on! On being asked if this was a conscious choice and if so, what was the ideology behind it, the Ice Cream singer says, “Magical realism has always been part of the Latin culture, whether it be in art or telenovelas. I wanted to capture that sense of a supernatural world.” The song talks about love, heartbreak, healing, and self-growth; the aesthetics used adds to the overall aura of the song. When roughly translated, De Una Vez means “at once” and was fast in making its way to the audiences’ hearts. All of these have resonance; and no matter what language you speak, these concepts are universal, making it easier for people across the globe to relate. The lyrics, when roughly translated, say “But now my chest is bulletproof” and the video shows Selena in a beautiful floral outfit with a heart affixed to her chest. On being asked what was the symbolism she was aiming at with that, Selena smiles and says, “We designed the glowing heart and call it the Milagro in Mexican culture and its light is meant to be a metaphor for the healing throughout the story.”

Describing her time working with multi-Latin Grammy Award-winner and powerhouse producer Tainy, Albert Hype, Jota Rosa, and NEON16 as a “magical” experience, Selena says, “From the very beginning, they got the sense of what a great love anthem the song is and how it should be brought to life visually. I immersed in the culture and it was important to join forces with some of the industry’s most influential Latin creators in order to communicate the purest vision possible and to make this beautiful love anthem.” On being asked about her reasons behind enlisting the duo of Los Pérez—Tania Verduzco and Adrián Pérez—to direct the accompanying music video for her song, she says, “If I was going to completely immerse myself into a project inspired by Latin culture, I wanted to work with native Spanish-speaking creators.” The actor has been seen experimenting a lot in 2020, from Rare to Ice cream with Blackpink and has now started off her new year with a Spanish song. “I have a number of things going on right now, and you will soon see my 2021 unveiling!” the singer adds when asked if we can expect more culturally diverse works from her in the near future.

The writer is a freelance journalist with Delhi Post based in Hyderabad. She can be reached on twitter
@nmadhulika1993

All’s NOT Well that Ends Well