State of Child Sex Ratio and Gender Equality in India

There must be a syncretic feminist perspective with an intersectionality approach to understand the women’s issues in the present times.

Women are seen as nurturers and the providers of emotional caretaking, and men are considered providers of economic support. Despite India’s reputation for respecting women and

treating woman as goddesses, the practice of female foeticide through sex selective abortion continues unabated. This is despite the Pre-Conception and Pre-Natal Diagnostic Techniques Act (PCPNDT), 1994. The 2011 Census revealed the number of girls per 1000 boys was 914. Inevitably, there has been a decline in the child sex ratio since the turn of the century. Astonishingly, urban India is performing worse than rural India. Even though India’s sex ratio is slightly better as compared to China and Pakistan, physical elimination of the women is of significant concern. The economic and non-economic disempowerment of women where women are considered as resourceless by families is the one of the main reasons for the declining child sex ratio.

Gender seems to be one of the most dominant variables that influence human development. When it comes to the right to vote, the government treats women as individuals. On the contrary, when it comes to land and property, then the right goes to the head of the household that is the male member. And this discrimination continues in every aspect. Hence, freedom of mobility, freedom to grow, making decisions for the young and older girls and addressing social gender norms are some of the important aspects of this issue. Dr. Mitu Khurana, who passed away on 19March 2020, faced extreme humiliation, injustice and discrimination at all the portals of justice: from lower (family courts), high and Supreme Court of India. Hers was the first PCPNDT case.

Speaking at The State of Gender Equality #Gender Gaps, organised by Gender Impact Studies Center, Impact and Policy Research Institute, GenDev Center for Research and Innovation, CitiMakers Mission International and the Delhi Post. Dr Bijayalaxmi Nanda, Associate Professor, Department of Political Science, Miranda House, Delhi University, spoke about the policy environment not only from a historical perspective, but from a contemporary perspective as well, because the declining child ratio has been an issue since the 1980s.

“We need to engage with the idea of gendercide put forth by feminist politics not just from the point of view of violence, but also from the point of view of discrimination. Through the lenses of gender-biased sex selection, we are looking at the disposability and the dispensability of women and girls before they are born not just from an attitude of son preference, but in terms of daughter aversion, female foeticide, sex-selective abortion and elimination of females during the pre-birth phase”, said Dr Nanda.

Although there has been a consensus around the idea of freedom of choice in reproductive matters, it is essential to map the course of one’s life amid the uncertainties that existabout its meaning, legal implications and its value.

When we look at the state of global discourses—the idea of sex selective abortion or gender discrimination—three questions come up; firstly, disclosure of ‘equality vs violence’ where equality means no discrimination, no violence and all genders should be treated equally, and demographic refers to the question of correcting numbers. Secondly the question of ‘crime vs justice’ where crime refers to the criminal acts of terminating female foetuses even before they are born, and justice means the substantive justice which is not just about the implementation of an act, but also going beyond that. Lastly, the disclosure of ‘rights vs ethics’ where rights refer to the right to property, land, body, labour and ethics means fundamental human rights.

Dr Nanda also emphasised on the fact that the policy response continuum should be looked at from both the demand side as well as supply side. While talking about demand, she referred to the families that has resulted in gender discrimination. In the context of supply, she referred to the invention of new reproductive technologies by the doctors and corporate organisations which led to the implementation of the PCPNDT Act.

The most interesting fact which Dr Nanda talked about was the range of dilemma in feminist politics revolving around five questions:

a) “Should we go with the law or outside the law?” when it comes to declining child sex ratio. Some feminists emphasise on the creation of laws while others believe laws may themselves become a site of gender discrimination since they reinforce power relations and may increase bureaucratic control.

b) “Whether it should be a pro-life discourse or pro-choice?” According to Dr Nanda’s observation via the young people, it seems that there is a pro-life disclosure, and the mother is pitted against the child. She further added that there is a need to develop this discourse because this is what leads to a problem when it comes to feminist politics as they have engaged with this issue from a pro-choice perspective in terms of empowerment and informed choices.

c) “Whether women should be seen as active agents or passive victims?” Dr Nanda shared the example of her friend Dr Mitu Khurana (see Khosla), who has twin daughters and was forced to go in for sex determination and then for sex-selective abortion. Despite the wishes of her in-laws, she fought a legal battle against the abortion and became the first complainant under the PCPNDT Act in 2005. 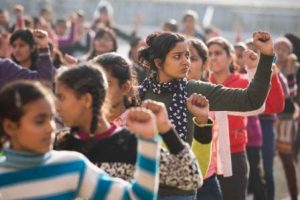 d) “Whether we should look at monetary incentives or rights-based approach?” In the 2001–2011 period, there were a lot of monetary incentives with ‘Ladli’ and ‘Laxmi’ schemes, where conditional cash transfers were given to the families to increase the acceptability of the girl child. While some cash transfer brought in the sense of security, their bargaining power within the community did not happen.

e) “Whether it should be within the state policy or should we look at resolutions outside the state?” Here, Dr Nanda talked about the ‘Two Child Norm’ and how these kinds of norms work against women’s rights to participate in Panchayati Raj and other places because it leads either to rejection and abandonment of women or to sex-selective abortion.

Dr Nanda highlighted the policy pathways put forth by the United Nations Population Fund (UNFPA), where they say that “one needs to look at 3Asof tackling daughter aversion” which would make a lasting difference.

First, by treating women and girls as an ‘asset’, second by enhancing their ‘autonomy’ and thirdly by addressing the ‘ageing’ access.

Dr Nanda pointed out two distinctions. One, “the binary distinction between save the girl child and not engaging with the women’s rights”, and second “the engagement with the idea of sex selection and abortion”. “It is challenging for the feminist politics to work on the selective abortion because there is an overlap over the right to abortion, but it is everyone’s responsibility to see that women and girls are not discriminated against at any level: cultural or beyond.

Dr Nanda concluded the discussion by quoting Gayatri Spivak “Strategic essentialism, where we may disagree as we live in a heterogeneous society, but we should agree on one thing which is that women should have rights over their bodies including the fact that there should not be any sex selection or gender-biased sex selection.” In essence, there must be a syncretic feminist perspective with an intersectionality approach to understand the women’s issues, in present times.